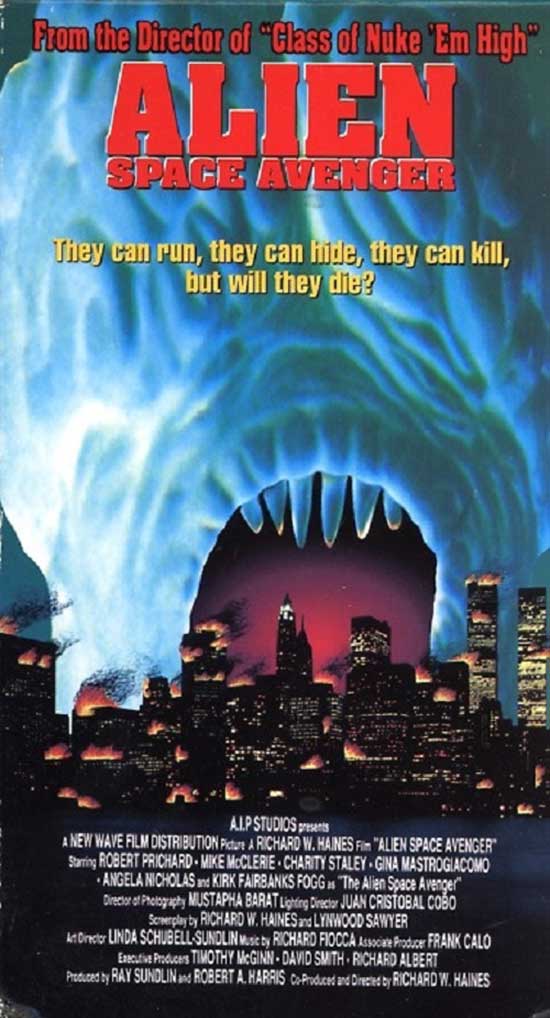 In 1939 a spaceship carrying four alien escaped prisoners crash-lands on Earth and the aliens take over the bodies of four locals. Fifty years later the aliens find out that an artist has written a comic book called “Space Avenger,” which they believe is about them. They go to New York to try to kill the artist.

The instant I saw Richard W. Haines in the credits to “Alien Space Avenger”, I started digging through my memory. I knew that name. For some reason, I did not attach any feeling of greatness to the familiar name. Once the movie was well underway, I had an inkling that he worked with low budgets much the same way Warhol worked with concepts. Given the overall tone of the film, I kept waiting for Lloyd Kaufman to walk past the camera. 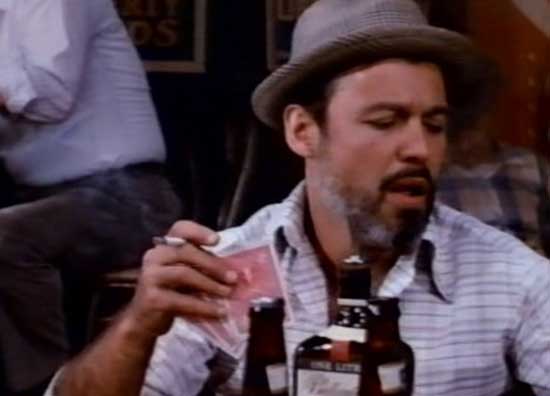 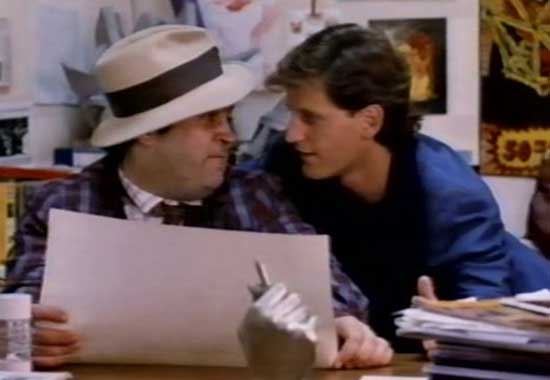 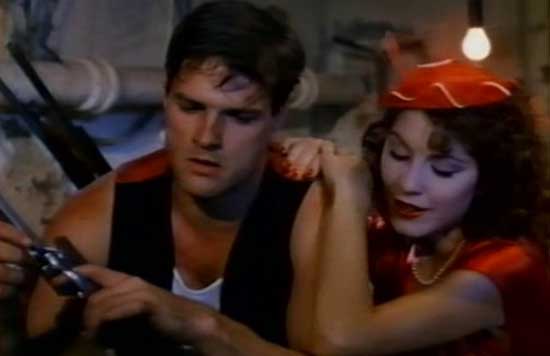 Now that we have established the pedigree, let’s look a bit closer at “Alien Space Avenger”.

We meet two young couples on a double date back in the 30s. While heading to a movie, they witness a spacecraft crash into the woods near their location. Boys will be boys as the two guys want to go check out the crash while the girls just want to go to the movies.

It turns out that the crashed ship contains four escaped alien terrorists who were being tracked by an alien agent who was ordered to either neutralize the problem or return them to the space prison. The terrorists take over our love birds and then proceed to look for plutonium to refuel their ship.
The four aliens stumble into a theater showing one of the Flash Gordon serials where they feel threatened by the “advanced” technology they see on the movie screen. At this point, they decided they should arm themselves. They do so in a VFW (Veterans of Foreign Wars) Hall that just happens to have loaded weapons casually hanging on the walls. Of course, the whole situation devolves into a bloodbath in which we learn the aliens can regenerate severed or damaged limbs as Rex, the leader, has his arm blown off by a shotgun.

After nearly being found by the alien tracker hunting them, they decide to lay low in their spacecraft until the time is right. The year this was made (1989) seems to have been the right time as their ship is uncovered from layers and layers of dirt. (Does that much dust fall in 40 years?) Just in case you had forgotten the aliens are the bad guys, they mow down the entire construction crew.

We then meet Matt. He has a very sexy girlfriend (though the actress can’t act that well) who wants Matt to pay more attention to her than the comic book he writes and draws for. Unfortunately for Ginny, Matt is determined to overcome his writer’s block despite his desire for her. While trying to convince Ginny to come back, Matt is hit by creativity when he sees the four aliens in 30’s garb wander into the dance club. Out of nowhere, he creates a story in which four aliens take over humans in the 30s and then hibernate for 40 years before trying to refuel their ship. Only his hero, the Golden-Age “Space Avenger”, can stop the aliens. 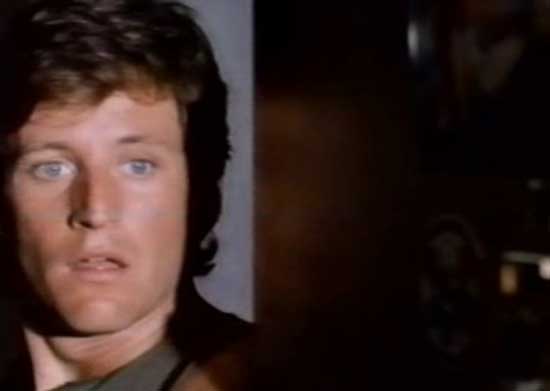 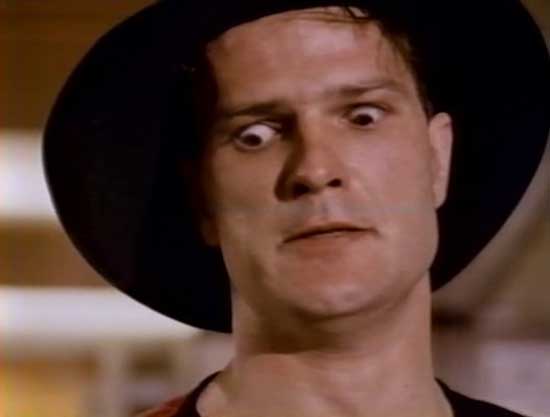 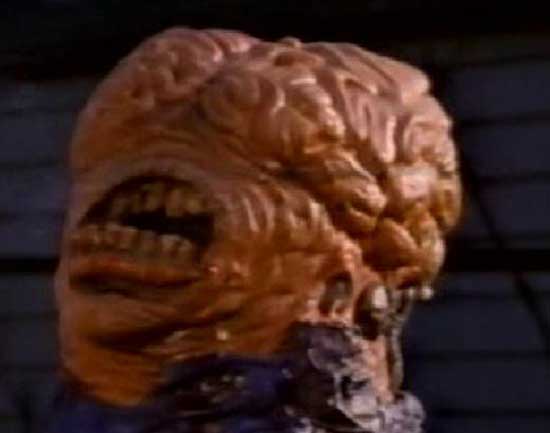 You can see where this thing goes from here. “Alien Space Avenger” is not about inventiveness or turning over fresh material; it is nothing more than it attempts to be, and that is just a silly bit of “splat-stick” cinema.

“Splat” is a good word for some of the inventively gross effects of the aliens regenerating themselves. The special effects are all practical and usually better than a lot of the effects that show up in actual Troma-made films. Lots of bullet wounds make up the rest of the effects, so enjoy the larger effects when they show up.
The fact that Troma keeps coming up in this review is because Troma is both the good news and the bad news for “Alien Space Avenger”. It has the frenetic energy of a Troma film with most of the characters belting out their lines as if to a deaf audience as well as the hyper-violent yet cartoon-like action. You get a lot of the gross effects and humor from the other company’s films. 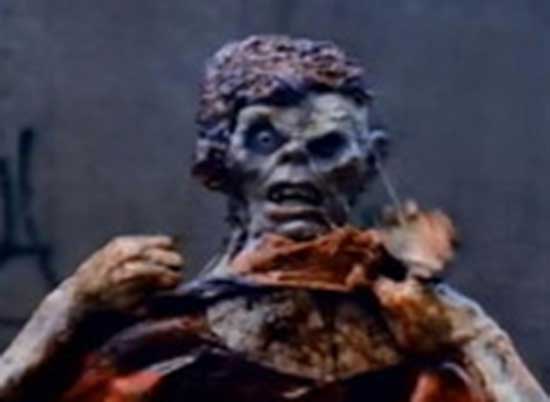 Sadly, while the film is entertaining, its constant reminders of Troma make you wish Haines could have made something that stood on its own without the crutches. The idea is fun. With a touch more originality in its presentation, “Alien Space Avenger” might have become a minor classic. As it is, it is worth checking out only if you can easily find a copy. Otherwise, you would have to be a Richard W. Haines fanatic to consider it required viewing.