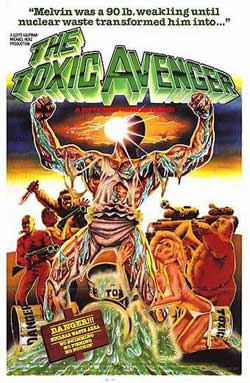 Tromaville has a monstrous new hero. The Toxic Avenger is born when mop boy Melvin Junko falls into a vat of toxic waste. Now evildoers will have a lot to lose.

“He’ll go from cleaning nerd to cleaning crime-fighter”
“Criminals, beware of the Toxic Avenger. He will kick your butt HARD!!”

“The Toxic Avenger” is an underdog cult classic for alot of reasons. The era of the 80’s was taking hold and out of nowhere came this odd, and extreme (to some viewers) horror comedy from the camp over at (then somewhat unknown) Troma. It was B-movie making at its best with a horror comedy that not only would last the throes of time, but would gain an “instant cult following” by word of mouth. VHS tapes were the norm, and often renters would flock in droves to check out anything deemed “talk-worthy”. “The Toxic Avenger” just happened to fit that bill rather nicely. 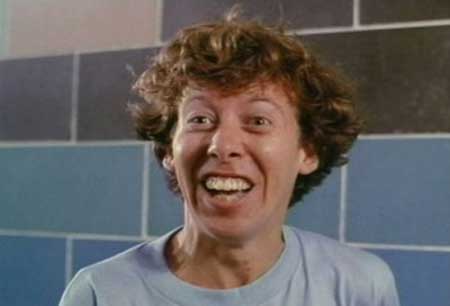 The movie helped to really put Troma Entertainment’s name on the map and went on to franchise an additional 3 films under the “Toxic Avenger” moniker. It was reported to have originated out of late night movie showings further spreading word. Toxic Avenger has long been regarded by Troma as the “the film that built the house of Troma” also being the 1st horror film release from this New York based company. The team was headed by Lloyd Kaufman and Michael Herz (started in 1974). 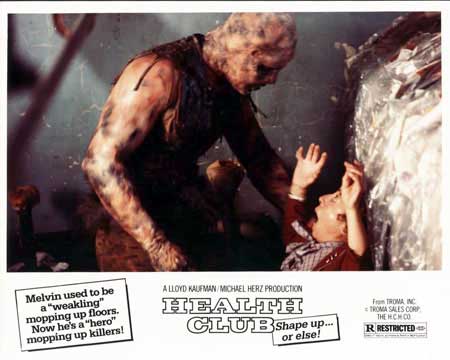 Toxic Avenger was experimental for the team at the time in an era where horror was beginning to fall short in the public eye. Horror had gone thru its ups and downs, but with the number of B-grade productions at the time, it was rumored to have fallen short in the consumer market.

“The Toxic Avenger” was based on the idea of creating a health club horror film (also to be titled “Health Club Horror”) The premise was written as a campy spoof of sorts using a toxic superhero arising from the weak shell of a nerd. 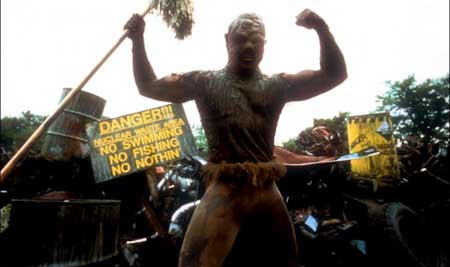 Melvin Ferd III (Mark Torgl) arrived to fit that bill with his nerdy shell that reminded us of those weakling ads in comic books. His day job furthered his predicament working as a janitor at the local health club. Though the obvious irony is evident, and what made this idea work. The town was deemed “Tromaville” serving as the perfect setting for Ferd to ordeal daily torment from the health club regulars. The players? Slug (Robert Prichard), Wanda (Jennifer Babtist), Bozo (Gary Schneider), and Julie (Cindy Manion)

The town of Tromaville was already corrupt with the mayor leading a crime ring and the local tormentors playfully smashing in heads with their cars (followed by disturbing picture-taking). To pass the time for their amusement they trick Melvin into kissing a sheep and wearing a pink tuto which sets Melvin into an anxiety-driven-attack resulting in him jumping from a second story window. This leap lands him directly into a drum of toxic waste causing him to morph, burn and disfigure in mass proportions. Melvin survives and manages to haul his as back home only to realize that he is morphing into a superhuman beast with enhanced strength. As they say…the Toxic Avenger was born! (note: The Avenger character was played by Mitch Cohen) 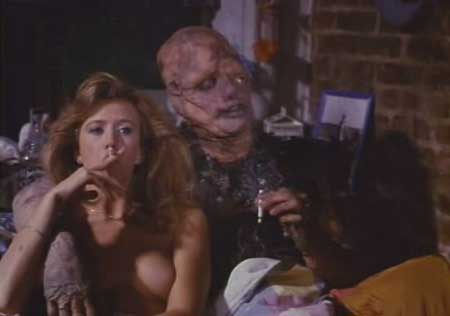 Needless to say, Toxic goes on a rampage smashing in heads and testicles with ease fighting local crime and those who have tarnished the Tromavilla name, Toxie eventually falls for an attractive blind woman by the name of Sarah (Andree Maranda) who returns the gesture making them quite the mix-matched couple.

The mayor who is deep into the crime scene begins to worry as his men and team are overtaken by this new local hero. The theme of the film provides for many such encounters that use practical effects gags to its advantage. 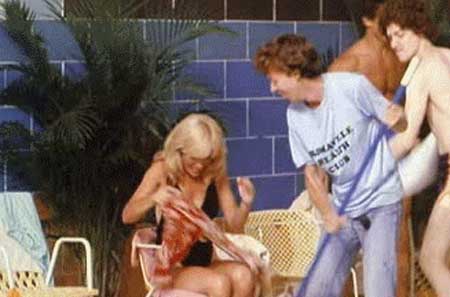 Fun facts on this one include: a cameo shower screen by future actress/hottie Marisa Tomei. The Toxie costume itself was reported to have taken 4 hours to get into with other practical effects being achieved by simple props. The term Toxic Avenger was never used in the actual film but rather referred to as the “monster hero” 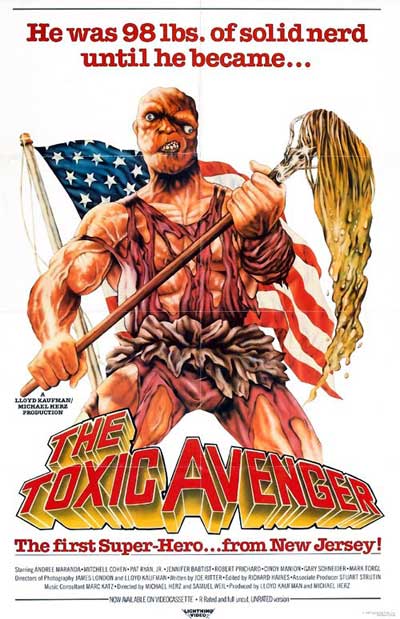 “The Toxic Avenger” was an instant fan boy smash that was quickly rented in mass quantities due to its violent and extreme campy presentation. It managed to serve as a trend for Troma to move forward-on that spawned all sorts of other “like” styled releases (such as . “Class of Nukem High“) The film at the time arrived during a period when extreme gore was less experienced from a rental aspect. 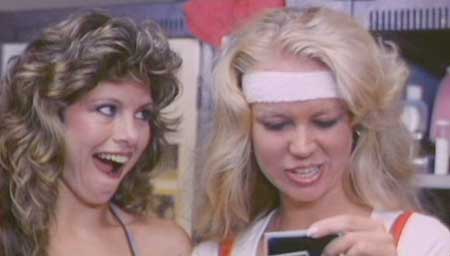 Toxic Avenger while keeping things quite silly also included several shots of dismemberment, eye gouging, animal cruelty, and gory head crushings. It was released with a slimed down R-rating in the US, saving its un rated version for direct Troma team purchase. “The Toxic Avenger” appeal hit at the right time for viewers looking for stupidity added to their horror experience. While B-movies have been a trend over the years, “The Toxic Avenger” actually redefined its base a bit defining many of “these” releases with the Troma classification (aka Troma-style, Troma-like)