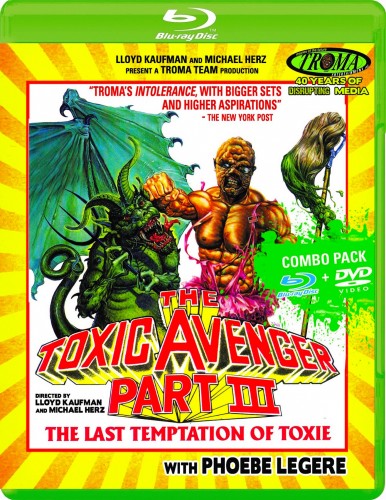 Toxie finds he has nothing to do as a superhero, as he has ridden his city of evil. So he decides to go to work for a major corporation, which he discovers may be the evilest of all his adversaries.

Toxic Avenger III: The Last Temptation of Toxie is, in part, the product of the decision by Troma to cut the original second film in the Toxic Avenger series into two parts. I’ll discuss the pros and cons of this later – first, let’s review the content.

After a recap of the first two films, the best scene is by far the opening. It’s (surprisingly) home to most of the film’s gore – Toxie (played by Ron Fazio and voiced by John Altamura) wipes out Apocalypse Inc.’s henchmen with ease in a series of grisly (and equally hilarious) takedowns. It’s also at this point that Kaufman takes the opportunity to make a jab at the mainstream film industry, including heavy-hitters like Warner Bros. and MGM, and highlight the rivalry between diverse, independently run film shops and their more generic, franchised counterparts (interesting, though perhaps not so relevant in the present); something which he can never do too much of, in my opinion. 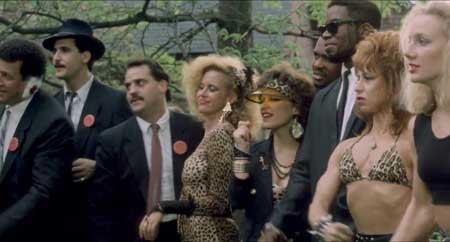 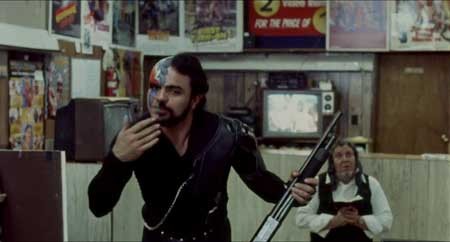 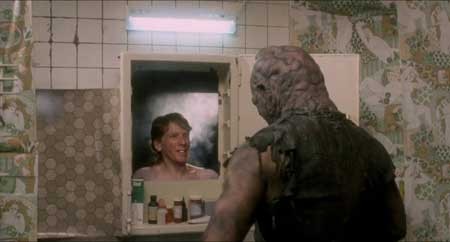 The plot of the film isn’t too complicated – as time goes on, with Apocalypse Inc. out of the picture, crime levels in Tromaville seem to drop to an all-time low, leaving our hero with nothing much to do. Bored, he resorts to fighting the most minute and mundane of ‘crimes’; old ladies cheating at cards, or children not eating their greens… That sort of thing. But, while the people of Tromaville are happy, Toxie has his own problems to contend with – without crime, he has no way of earning money. As a result, he’s depressed, and is forced to live off his blind girlfriend’s welfare checks.

Then, the catalyst for the rest of the film is revealed: Claire (Phoebe Legere) is offered an operation which could restore her sight, but there’s a catch – it’s going to cost them $357,000. While Toxie is worried that Claire might leave him if she sees what he truly looks like, he’s determined to find a job and give her what she wants. Things don’t go immediately as planned – a career with the IRS is no place for a hideously deformed creature of superhuman size and strength, after all – and so Toxie and Claire turn to the church for answers.

The words of the pastor prompt a bizarre dream sequence where the Toxic Avenger is confronted by Melvin (Michael J. Kaplan), his former self, which only adds to his insecurities. Meanwhile, the Chairman of Apocalypse Inc. (Rick Collins) is hatching a plan to take over Tromaville. Ultimately, knowing of Toxie’s plight, they decide to offer him a job as a spokesperson for their company – after all, if New Jersey’s only superhero supports them, then they can’t be all bad, right? Toxie quickly accepts their proposal. Claire undergoes the surgery to restore her sight and Apocalypse Inc. begin their destruction of Tromaville, polluting the city and enslaving the population. The Toxic Avenger seems oblivious to all of this, happily going along with their plans, and his compliance with Apocalypse Inc. means that he quickly falls out of favour with the people of Tromaville. 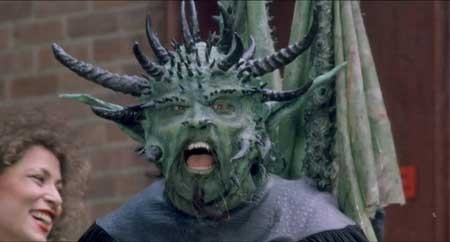 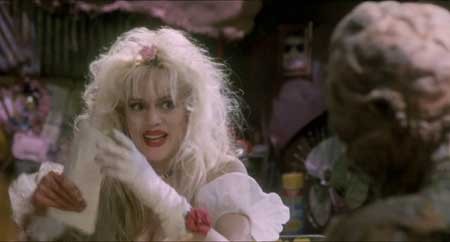 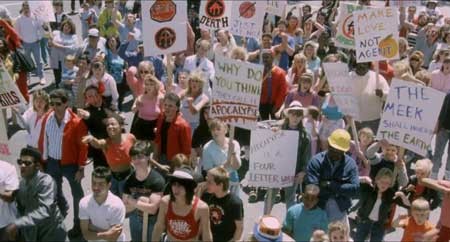 Sadly, much of Toxic Avenger III: The Last Temptation of Toxie lacked all of the action which originally drew me to the series. There are plenty of laughs, yes, but it feels as if something is missing. I was relieved when, during the final scenes, the head of Apocalypse, Inc. reveals that he is none other than the Devil himself – it definitely got the ball rolling again. The transformation sequence is great, and the overall design of the Devil, while fairly stereotypical, was good to look at. He challenges Toxie to complete the ‘Five Levels of Doom’, a real-life version of his favourite videogame, in order to defeat Apocalypse Inc. These scenes, while short-lived, are definitely fun to watch.

Phoebo Legere’s role as Claire is somewhat divisive – her blindness and overt sexuality are both exaggerated to a huge extent, so it falls somewhere between hilarious and irritating – but I enjoyed it overall. Fazio and Altamura were great as Toxie, and while Mark Torgl did not reprise his role as Melvin, Kaplan does a good job (Kaufman has since stated, however, that he wished that he had agreed Torgl’s requests for higher pay). Some other Troma regulars rear their heads during Toxic Avenger III: The Last Temptation of Toxie – Jessica Dublin is great in the role of Mrs. Junko, Toxie’s mother, and the notorious Joe Fleishaker makes an appearance as one of Apocalypse Inc.’s executives. 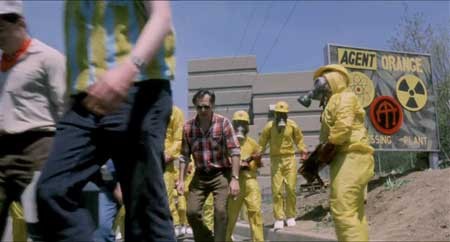 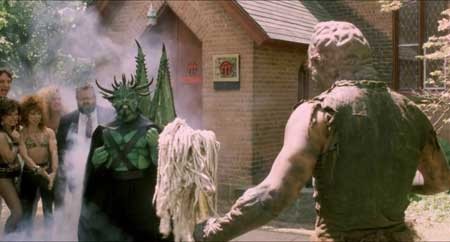 Toxic Avenger III: The Last Temptation of Toxie is widely considered the least memorable film in the Toxic Avenger series. It lacked a lot of the silly gore of the original, relying more on Troma’s brand of inept humour. As I mentioned earlier, Toxic Avenger III is made up in part from footage originally intended for Toxic Avenger II, so, as you’d expect, it does a good job of wrapping up most of the events from the previous film. However, watching the two back to back would be a mammoth task, especially since I didn’t find that the third instalment brought much different to the table.

So, in conclusion: if you’re a big fan of the original Toxic Avenger, and you’re looking for more, I’d head straight for Citizen Toxie. That is, unless you have a lot of time on your hands.

The Toxic Avenger Part III: The Last Temptation of Toxie is now available on bluray