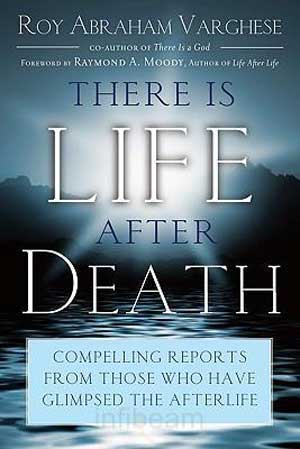 THERE IS LIFE AFTER DEATH: COMPELLING REPORTS FROM THOSE WHO HAVE GLIMPSED THE AFTERLIFE (PAPERBACK)
by Roy Abraham Varghese
Raymond A. Moody (Foreword)
Published by New Page Books
Publication Date: 2009
Format: Black /White – 288 pages
Price: $15.99

“There is Life after Death”, a bold statement that is backed up by a comprehensive analysis of the facts versus fiction. Roy Abraham Varghese states that the world doesn’t really need another after life book, so his approach is more on providing the existence thru facts and breakdowns more than just another ethereal journey. Proving the existence of something that is invisible, not of our earth and only approached in theory is a vast undertaking in itself. Though Roy has a plan. That plan is to organize the facts, the function and arrange them into a thesis of the subject matter that provides compelling evidence much as the scientists of past times have proved that the sun was the center of the galaxy. For this alone, this book needs closer examination. I for one am a believer only because of the many books I’ve read on the subject. As a standpoint it benefits us to “believe” rather than to accept that we fall away into nothingness. So if I’m bias, it’s only because I too support the idea that something exists beyond. Raymond A Moody provides a very well written “forward” which in itself is compelling without reading ahead. As you know Moody was one of the pioneers of published material on After Life.

As Roy investigates all that has been proposed he simplifies it into points, connecting the dots and reasonings up till now. Scientists need evidence, critics look for holes, religions base everything on faith, and historians need to find past evidence. The numbers presented and the data circle is overwhelming, which in itself should provide a firm basis.

What is interesting is that the author includes all the noted skeptics and basis explanations for their rebuttals, but as Roy details….. there is alot that just doesn’t stand on its own merit. Of course we get the case of oxygen to the brain being cutoff, disillusionment that occurs under duress, sleep disorders that have known to cause hallucinations and the cases of just the mind itself. No stone is unturned as its entirely plausible that the NDE’s are just a state of mind that occurs in the dying progression. What I look for though is the reports of the more unexplainable. This includes NDE’s who report similar journeys, descriptions from hundreds that all correlate more or less, the unexplained reports of the subject dying being able to describe the surroundings and the conversations, and even the appearances of loved ones awaiting.

What is inheritantly different about this book than others is much comes as a constant comparison of what is said, examining the facts and at times a rebuttal of summary of what was said. This makes this book its own creation by really laying out everything upon everything that relates to the after life questions, theories and approaches. Now there are several books I’ve read that go in different directions upon speaking of the metaphysical locations and entities one encounters after death. “There is life after Death” does however revisit the religious aspects. With fairness it lists and accounts for all the after life scenarios and how the end is perceived. There is a fair amount of revisiting the Christianity aspect whether directly or indirectly This is done cleverly by the accounts of others. In one chapter several who have been given the visions, report the visual aspect of heaven, hell and purgatory.

The first portion of the book however is clearly an ongoing argument or analysis of the brain vs the reality of the afterlife. Roy, ends much of these with summary points so the readers can review the previous paragraphs with a sense of closer on what was said to make sure the coverage is complete. He analyzes what the scientists say, what is said about reincarnation, what is said on holistic’s and several other skeptic verse belief scenarios.

It benefits us all to believe as that notion promises “something” beyond the stage of lying in the ground. There is much analysis of the consciousness which is separate from the mind and body. In essence, the appearance of ghosts, and apparitions in itself suggests something beyond.

In summary, this is a fine and extremely well researched piece. It differs in the sense of being warm and fuzzy or damning and horrendous. It is neutral for skeptics and also convincing for non believers. The point is simply that there is a point. Those who dismiss the notions are given some baggage to consume and perhaps reconsider. Those who are absolute are given new angles to comprehend. When all is said and done, the weight of the existing evidence seems too weighted to ignore and dismiss as hearsay and fanatical. There is something lurking for all us, what you believe and what you take with you is your choice.

Available a www.newpagebooks.com
Available at Amazon