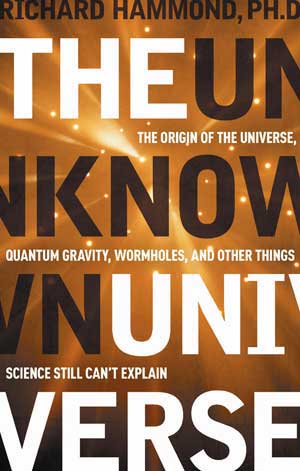 The Unknown Universe is a well packed edition of magic, mystery and unfathomable theories for scientific minds, curious readers and fans of the unknown and unspoken. For introductory sake, I suggest a thorough look at the table of contents section. It’s laid out very nicely with short paragraphs intros to the multiple subjects at hand. Where does one begin? Cosmic Acceleration, Dark Matter, Quantum gravity…take your pick. As a college professor author Richard Hammond does what he knows best. He quizzes you every so often just to check and see if you are paying attention. The answers are explained in detail as to why they work and why the rest don’t. With this is a series of historical data that only proves how far we’ve come in such a short time.

Theories that were solid are replaced with modern thinking. With cosmic ray paradoxes and re-normalization theories… you take what you can and leave the rest for days of clarity. I think the best advice for readers is the book focuses on the scientific approach to this material rather than the ultra metaphysical. So if that helps to influence you book buying decisions, then you should be well equipped

While the information is fascinating, at some point the college professor quantum physicists begins to kick in, which can get a bit heavy on some readers. Hammond talks about Einstein, blunders, theories that came and went and came back again all based around a universe we are still coming to terms with. The study itself is unique that it translates alot of here’s where we were and here is where we are now progress.

Kepler is discussed and even with the progress he made it still fell short in later years. Dark matter is attempted to be explained though it comes across more as just invisible mass that we cant see be can measure using modern technique. I believe dark matter has a ways to go before we really grab its potential for explanations.

I found it easier than to just read it back to front to find the chapters of interest that weren’t completely over my head. Not that Hammond doesn’t have a great writing style but that when you get ito complex universe speak an mathematics it can be overwhelming just trying to read and make comprehension.

“Origins of the universe” is well articulated. The battle between an explained universe and a contracting one is challenged and put into perspective. For those taking note…it’s expanding. Hammond’s teaching background comes into play which lays out the details pretty clear for mortal minds to understand. Well as much as “we” can understand..that is. Now if you really want to challenge your thinking, then read into Hammond’s statement that the world was created 5 minutes ago. Somewhere I was expecting the matrix’s “oracle” to come walking out at this point and proclaim….”If I was to have told you that you’d break the vase, do you think you still would have?”.

There’s complexity and a dose of sanity presented all under one miraculous shell that expands the thinking and challenges the senses. When we get into the chapters on Tachyons and antiparticles …I think even trekkies would glaze over and scratch there heads. Negative mass, gravitational waves…left handed universe…holy crap Batman. Think we’ll skip back to the easy stuff. Interestingly enough.

In closing , this is a remarkable exploration that will connect on some level. I believe some chapters are way to deep to phantom and digest while others are played out nicely and welcoming. Take your pick and pick one up as well. He certainly is great at what he does and my notion is to re-read this again for consumption sake. Enjoy