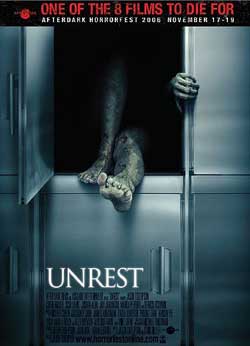 A young pathology med student suspects that the spirit of a dead cadaver in the hospital morgue where she works is killing off all those who handle or desecrate the body.

Unrest is a fairly decent horror. It follows a group of young medical pathology students: Alison Blanchard (Corri English), the focus of the story; Brian Cross (Scot Davis); Carlos Aclar (Joshua Alba); and Rick O’Connor (Jay Jablonski). Together, they are assigned a cadaver to dissect as part of their anatomy class under Dr. Walter Blackwell (Derrik O’Connor); the film details her attempts to uncover its grisly secrets. 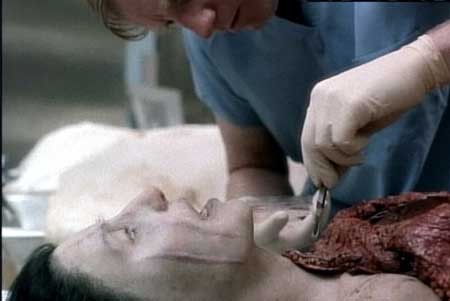 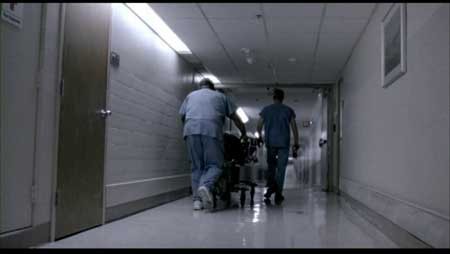 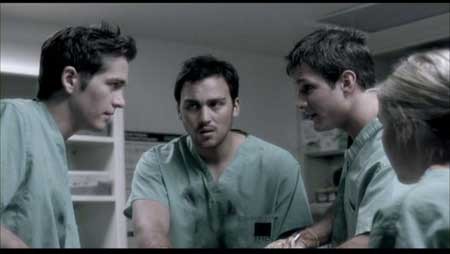 From the moment they begin the dissection, Alison is uncomfortable – she’s unnerved by the presence of the body, and repeatedly mentions the strange ‘feeling’ she has (trust me – you’ll be tired of hearing about it after the first half hour). The corpse is covered in a host of scars, seemingly from self-inflicted wounds, and Alison’s desire to know the reasons for the deceased’s sadomasochistic behaviour puts her under additional pressure as she tries to distance herself from the body on the table.

Owing to financial problems, Alison is staying within the hospital itself, making it difficult for to her to escape from the bizarre series of events which occurs in and around the morgue over the course of the film. As a number of unexplained deaths take place within the hospital, it becomes increasingly obvious that a terrible fate awaits those who ‘disrespect’ the body of the deceased (exactly what this means is pretty vague – it seems as if just touching the body is enough for some to meet their grim demise). In her search for answers, Alison (miraculously) manages to find video footage of the woman in question, Alita Covas (Marisa Petroro), depicting her descent into insanity. It’s eventually revealed that, after uncovering a mass Aztec grave (in Brazil, for some unknown reason) containing the bodies of 50,000 sacrificial victims, Covas managed to anger Tlazolteotl, the Aztec god of fertility. As a result, she became a prostitute and committed a number of murders before being confined to a mental asylum where, by her own hand, she met her end. Alison must return the body to Brazil in order to quell the restless spirit of Covas. 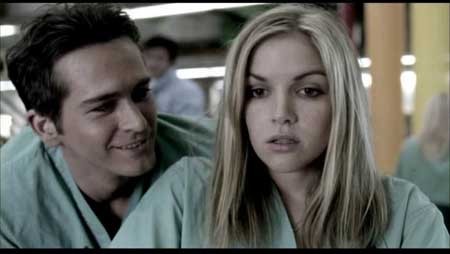 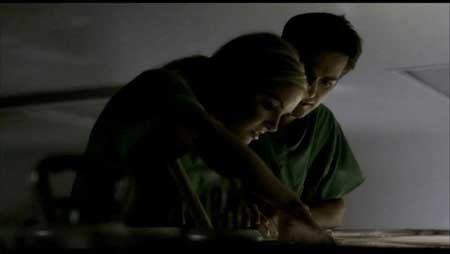 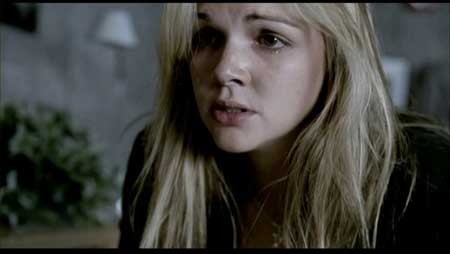 While the plot of Unrest wasn’t necessarily bad, I felt that the whole ‘disturbed Aztec god’ concept was overplayed to such an extent that the scare factor was lost almost completely. The same image of Tlazolteotl is shown drawn in blood (spooky) a number of times, and it loses its ominous meaning after the first couple of times. The film’s score was unnecessarily dramatic, and rather than helping to build tension, it overshadowed some moments during the climax. Alison’s atheism is mentioned multiple times, despite the fact it has no real bearing on the plot. There’s a lot of religious nonsense about the existence of spirits and why you shouldn’t mess with dead bodies – given that the majority of viewers will never even touch a corpse, let alone have the opportunity to hack it up, the ‘message’ falls flat.

The trailer claims that, in a film first, real bodies were used in the production of Unrest – given that it was filmed in a genuine morgue, this is entirely plausible. However, it’s not the first film to have used actual human remains – Poltergeist, released in 1982, featured a scene with human skeletons, and the 1987 film Men Behind the Sun included the autopsy of a child’s body. 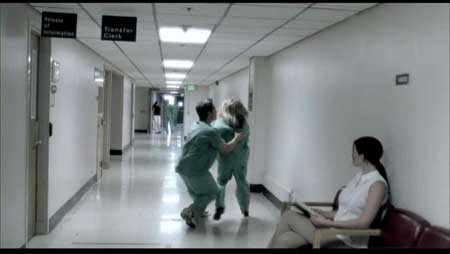 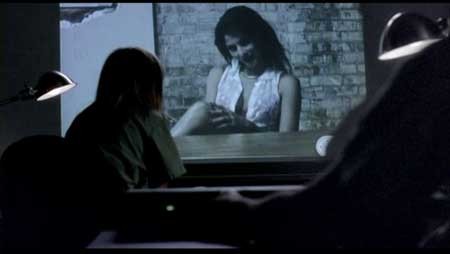 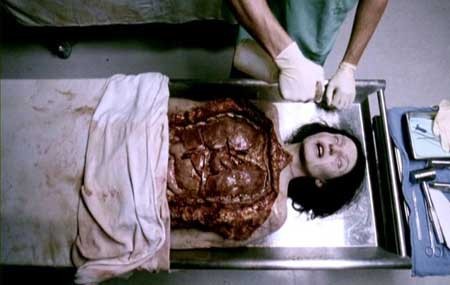 There’s some reasonable chemistry between the actors onscreen, and most of them aren’t necessarily bad – I think that, in this case, the dodgy atmosphere is more the responsibility of bad writing and direction. However, in spite of that, there are some solid scenes. The autopsy, which takes up a fair bit of screen time, is very well done, and there are plenty of gruesome innards on display. The lab’s cadaver tank is particularly creepy, though I did wonder how it was possible for Alison and Brian were able to take a dip in formaldehyde (an irritant and carcinogen – the sign on the morgue’s door makes that clear) with no immediate consequences. While the writing does offer a little comic relief, if you’re squeamish at the thought of a dead body, I’d give this one a miss.