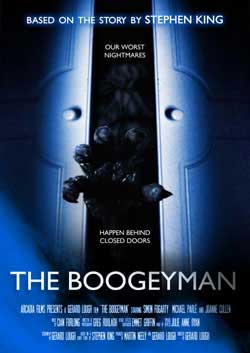 “When Andrew Billings (Simon Fogarty) goes to see a psychologist to explain how an evil creature that lives in his closet is responsible for the deaths of his three children he is met with disbelief. But as the story progresses, both Dr. Harper (Michael Parle) and the audience will start to consider the possibility that this “boogeyman” might be real after all.”

The Boogeyman is a low budget short film that was created based on the Stephen King short story. Per Wikipedia: The Boogeyman” is a short story by Stephen King, first published in the March 1973 issue of Cavalier magazine, and later collected in King’s 1978 collection Night Shift. Per previous reports, the title story was licensed for $1. Though its the actual piece that we are reviewing and that’s what’s important.

The film begins with a flashback confession from Andrew Billings as he confesses his heart out to a random hired psychiatrist. As he explains, he has arrived just to reveal his story to someone who will listen. Filled with grief and guilt,  it is apparent that his story has actually more of the supernatural nature than the psychiatrist would have expected. From there on Andrew take us down a road of his past life and how his 3 children were killed by a entity he refers to as the boogeyman. The deaths were ruled as accidental child deaths but Andrew has long suspected a more sinister force at work. His children often referred to a boogey man in the closet which keep them up at night. Until Andrew starts putting the pieces together…..the idea was often discarded as childhood nonsense. Though Andrew will learn a thing or 2 about darkness and what lurks within the shadow.

The movie created by Gerard Lough is a self financed project that was adapted into a 27 minute movie. There are no frills here, no over the top editing or elaborate FX. The piece is kept simple with basic practical fx and a story. The story itself has a cool twist ending, though the main character Andrew Billings comes across as not very likeable. Maybe it’s his views on life that contribute to that factor or his passive way of dealing with his children’s deaths. Since I haven’t read the Stephen King piece myself, I’m not sure if this was intended to be a direct monster film or if the story is saying something more subliminal and sinister about the father Andrew himself. The ending would suggest otherwise, though I couldn’t shake the idea that Andrew was the monster he most feared. 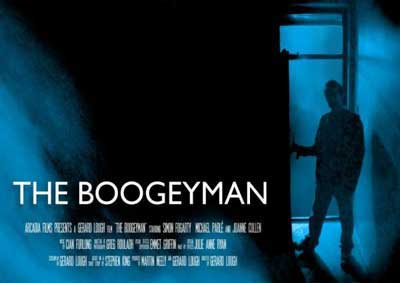 The piece has been getting good response from festivals as a short piece. I couldn’t see this being taken into a full length direction with out more dynamics in place though it is a solid effort by the director none-the-less. In the end “Boogeyman” is a small but entertaining little piece that deserves a look.