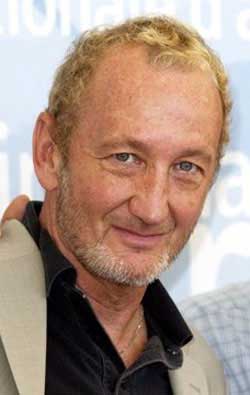 {New York, NY, October 26, 2010) – The New York City Horror Film Festival (www.nychorrorfest.com) today announced their full programming slate of short and feature films, featuring over 50 films submitted from the United States and some 15 countries from around the world. The 2010 NYCHFF takes place November 9 thru 14, 2010 at the Tribeca Cinemas, located at 54 Varick Street at Canal Street. The Festival’s Opening Night Gala will take place this year at Soirée (199 Bowery at Spring Street) on November 10 at 8:00pm. The gala is open to the public and will feature live performances, short films, complimentary c**ktails, and more.

DON’T GO IN THE WOODS (Noncompetition) Directed by Vincent D’Onofrio.
– An indie rock band of five young men heads into the woods for a weekend of creative inspiration away from modern distractions. New songs are sung and written but female groupies crash the creative jam session causing distraction. In traditional slasher movie style, characters begin disappearing and are violently killed by a crazed murderer. Unlike a traditional horror film, DON’T GO IN THE WOODS is a musical with scenes of characters singing while being murdered. The film oozes with thrills and a dark sense of humor complemented by a solid rock soundtrack. {US} 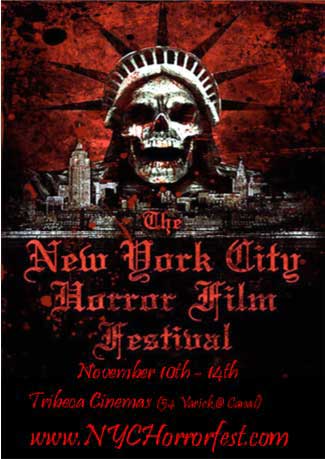 YELLOWBRICKROAD (Competition) Directed by Frank Holland
– In the Fall of 1940, the entire population of Friar, New Hampshire walked together up a winding mountain trail and into the wilderness. Without warning, they left behind everything: their homes, their clothes, and their money. The only clue where they went was a single word etched into stone near the forest’s edge: YELLOWBRICKROAD. In 2009, the coordinates for the ‘YELLOWBRICKROAD’ trail head are declassified. An expedition begins in hope of answers. A few among them believe they will find something terrible in the forest. But it is the forest that will find something terrible in them. {US}

BEREAVEMENT (Competition) Directed by Stevan Mena
– The horrific account of 6 year old Martin Bristol, abducted from his backyard swing and forced to witness the brutal crimes of a deranged madman. {US}

THE PACK (Competition) Directed by Franck Richard
– In the middle of a snowy no man’s land, Charlotte picks up Max, a hitchhiker; they stop in a truck-stop restaurant, and when Max doesn’t come back from the bathroom, Charlotte starts looking for him in vain. She decides to return during the night but gets kidnapped by the bartender, La Spack, who turns out to be Max’s mother and needs to feed her kids, ‘The pack’, a bunch of blood lusting ghouls. Alone and in the middle of nowhere, she quickly realizes… she’s next on the menu! {France}

OUTCAST (Competition) Directed by Colm McCarthy
– OUTCAST is the tale of Petronella, a Scottish/Romany girl, and Fergal, her mysterious Irish traveler boyfriend. As their doomed relationship plays out, a Beast stalks the estate, killing locals, working its way towards our protagonists. Meanwhile Cathal and Liam, two mysterious travelers from Ireland use ritual and magic on a blood hunt. Mary, Fergal’s mother performs ritual and magic of her own. In a vicious finale we know one thing: the Beast must die. {UK}

TICKED OFF TRANNIES WITH KNIVES (Competition) Directed by Israel Luna
– A group of trannies are violently bashed and left for dead. The surviving ladies regain consciousness, confidence, and courage ready to seek out revenge on the ones who attacked them. {US}

KISS THE ABYSS (Competition) Directed by Ken Winkler
– When a young woman is brutally killed by an intruder, her husband and estranged father conspire to bring her back from the dead with the help of a mysterious desert dweller. Soon after she awakens, she begins to realize that something is horribly wrong… {US}

WON TON BABY (Noncompetition) Directed by James Morgart
Thirty years ago brothel owner Rachel “Madam” Won Ton found herself one drug-filled night involved with her wildest client. That encounter leaves the Madam pregnant. She decides to move on for “cleaner” life. Today, her brothel converted into a Chinese restaurant, the Madam’s past continues to haunt her. However, her continued social scorn is the least of her concerns when she learns her adult daughter, Lily, has a parasitic twin growing in her belly! When the fetus is removed, it is not only alive; it possesses a mutated umbilical cord. The baby’s mass murdering and eating of the locals forces the Madam to confront a secret she’s hidden for years. Can the Madam solve things before it’s too late or has she sealed her family’s fate by the release of the child? {US}

A NIGHTMARE ON ELM STREET
Lifetime Achievement Award Presentation to Actor/Director Robert Englund
– In the dreams of his victims, a spectral child murderer stalks the children of the members of the lynch mob that killed him. A print of this film will screen as part of the Lifetime achievement program dedicated to Actor /Director Robert Englund. {US}

Also part of the program this year’s program are the four audience choice award winners of the Killer Shorts Sudden Death Competitions that was held in conjunction with Wizard Conventions throughout the spring and summer of 2010. The winners are:

NYC HORROR FILM FESTIVAL (NYCHFF) was founded in 2001 by Film Producer and Director
Michael J. Hein. The festival is dedicated to the international genre film community and there are no restrictions on the films screened during the festivals. Programs include short and feature films screened both in and out of competition. The Festival jury presents awards to films in the categories of Best Feature Film, Best Short Film, Best Cinematography, Best Special Effects, Best Actor / Actress, Best Screenplay for films showcased, and an Audience Choice Award. The NYCHFF also presents an annual Lifetime achievement award. Past recipients include director George A. Romero, Special Effects Artist and Director Tom Savini, Producer and Director Roger Corman, and Producer and Director Mick Garris. Over the last nine years the festival has grown into America’s largest and most recognized genre film festival focusing solely on Horror, Science Fiction, Fantasy, and Thrillers. Each year the NYCHFF celebrates both the horror classics we grew up with and new genre films & filmmakers who created them and fills the city with special screenings, parties, celebrity guests and free giveaways. For more information visit the festival’s website at www.nychorrorfest.com