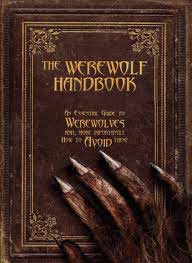 The Werewolf Handbook: An Essential Guide to Werewolves and, More Importantly, How to Avoid Them

Werewolves are almost becoming as popular as vampires.  I think we owe all to that Twilight thing and the illusion of the 2 species fighting over a hot chick. But really these critters have been with us since before I can remember. It seems now that there is just more books being produced about them. If you happened to pick up its companion book “vampire handbook”, then this one is a perfect sister to the 2. If not it is still a fine looking book on its own. My first thought here though was….gifts for those horror genre relatives that you are unsure of what to get. It is actually a nice piece of work, that I’m wishing now they had one based on demons, Godzilla, hellraiser characters or mythical monsters. I’ve never been a “huge” werewolf fan but I still appreciate them as a major part of our genre.

Moving on, this book like its sister book, features an excellent design format, hard cover, color pictures, elastic band and of course the content itself that I even learned a few new things from. I’m not entirely sure if the new things were made up or taken from old tales, but I’m going to default to old tales and lore. Such things include how to spot a werewolf. We are explained, to look for a larger ring finger, to spot signs at moon changes especially a naked man walking around in the morning. hmm……. ya my first call to the police wouldn’t be werewolf…but hey …you never know right?

There are types of werewolves, locations of werewolves and even how to avoid them including a final chapter test you should take. As an overview its all darn pretty to look at and is designed with a passionate style that really pulls you into the mood of the writings. As mentioned, this might be the origin of a set of these things in which case, your gonna want to buy them all.

But getting back to the content a bit, the attraction here is not only reliant only common werewolfisms. The are plenty of chapters that visit different country perspectives and wolf- like origins. We have the Laignach from Ireland, the Eigi Einhamr from Norway and the Loup-Garou from Canada. These are all new to me, so it’s a good guess these aren’t names that are rolling off you tongue either. It doesn’t stop there as we visit Germany, St Christopher and several other Lycanthrope-like creatures. All a part of your formal training into werewolf lore. If you ever dreamed of being a hunter like those TV “supernatural” guys, you may want to get educated before running out on kick-ass parade. Thanx again to Barron’s Books for creating some cool books we horror fans can enjoy over a $5 foot long or Big mac. Last mention has to include the retro style art included that I’m a big fan of. Yunno those paintings and illustrations from back in the “day” that come from a far more paranoid time than what we live in…..cool beans!

Side note, author Robert Curran is quickly becoming the tell all werewolf author, stick with this guy and check out all his stuff 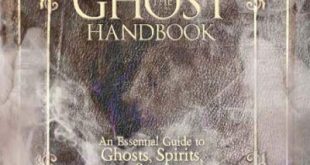