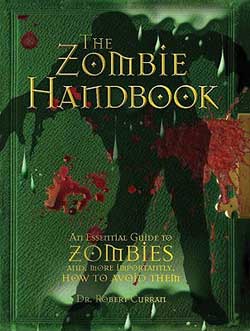 THE ZOMBIE HANDBOOK: AN ESSENTIAL GUIDE TO ZOMBIES AND, MORE IMPORTANTLY, HOW TO AVOID THEM

From the collector series of Barron’s books comes a new entry “The Zombie Handbook: An Essential Guide to Zombies and, More Importantly, How to Avoid Them “written by the prolific expert in monster mythology, Bob Curran.

Zombies have become a part of our culture in a uniquely bizarre way. Whether it is thru the gazillion films out there boasting these creatures as frightening invaders. Or to the cultural implications carried down from lore, as far remote as Africa to Louisiana. This latest read like other books of its kind, gives tribute to the zombies who haunt and mystify. You may not directly think of mummies as zombies since they have seemed to fill their own sector of horror. However, traditionally zombies are simply the un-living, the walking dead and the resurrected corpses of magicians and black magic.

Mummies, one of the original zombies have not been without their contribution to the zombie classification. The book tells us stories of uncovered Egyptian bodies who have cursed their disturbers. How about the ancients whose potions preserve these bodies to protect the treasures of empires past. Maybe it’s the slaves and voodoo practitioner who lead the myths? You’ll have to check it out for yourself

There have been reports of a poison sort of liquid that suspends the bodies in a frozen state for a period of time to trick medial experts that the takers were in fact those of the dead. Is this practice, one of the zombie originators?

The book gives us a helping of history, but also a helping of fiction. This fiction comes in the form of recognizing the undead, their smells, their mismatched clothing, their lack of speech and their blank staring eyes that are more associated with the zombies of popular fiction and movie making.

The fascination, however extreme or absurd, seems to stem from this traditional sense of being and the innate sensation that we go on living past our actual deaths. Perhaps the spirit has flown the coop but the bodies still carry some use to those who might control them. So where did the flesh eating come into play. Look no further than the reports of faraway countries who wrote about such myths inspiring today’s most terrifying film content.

The zombie handbook is meant to educate and entertain with a healthy helping of myth and reality. If you are approached by the walking dead, maybe a handbook will do the trick. At least you’ll know a thing or 2 on WHAT to do if not WHEN to do it. A small petite and beautifully packaged little read that certainly is a shelf stocker that others will want to dig into. Comes complete with binding band and cutout “contents” hand…enjoy!

The Zombie Handbook: An Essential Guide to Zombies and, More Importantly, How to Avoid Them