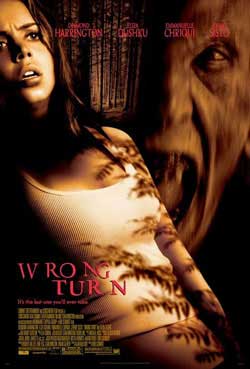 License to Drive meets Deliverance when Scott (Desmond Harrington) crashes into a carload of three other young people (Eliza Dushku, Jeremy Sisto and Emmanuelle Chriqui). The foursome is soon lost in the woods of West Virginia, where they’re hunted by three cannibalistic mountain men who are grossly disfigured via generations of inbreeding. Should’ve called AAA!

QUICK FIX:
A snazzily dressed and self-involved med student is stuck in traffic thanks to a wreck on the highway. He’s late for a meeting, so what does he do? Well, being that this is a horror movie, he decides to take a cross country shortcut through the backwoods of West Virginia, of all places, and thanks to dropping a CD on the floor and fishing for that at just the right time, he has a wreck of his own, crashing into the SUV of two couples and one badass former vampire slayer (on TV, anyway). So with two totaled vehicles staring at them and being stuck in the middle of the woods, they take off on foot to find some help. And, thankfully (again), this is a horror movie, so standing between them and civilization are 3 deformed, inbred, psycho nutjobs staring at our six-pack of attractive 20-somethings like they were the buffet at Sizzla. Guess they got tired of fighting over the possum stew every night… 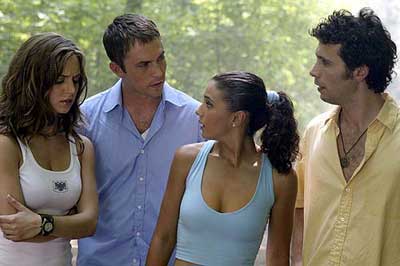 RAMBLINGS:
I have been told through the years, by a couple of friends, that not only am I easy to please when it comes to horror movies, but that many times I also have bad taste. Usually both statements come from the fact that while we usually agree on the classics of our youth, I like many of the new wave in the last few years (a few remakes included) that they tend to snob for what they call a better time of judgment on Hollywood’s part when it comes to horror movie making. I don’t look at myself as easy to please when it comes to any genre of movies, I just have a twisted sense of humor and a very high appreciation for the darkly comical situations found in many newer, especially lower budgeted, horror movies of the last few years. As for the bad taste part, well, I’ve heard it both ways. But from time to time, the suits get it right when they greenlight something, and WRONG TURN is one of those very few so-called “mainstream” Hollywood horror movies of the last few years that really reached out touched me in a way that I’m still debating on whether or not I should notify the authorities, but thoroughly enjoyed nonetheless. 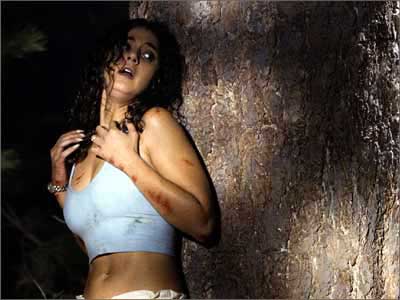 The cast is exceptional here – everyone brought their sh*t and came to play. Desmond Harrington (LOVE OBJECT, GHOST SHIP, DEXTER) has made quite a genre name for himself in the last few years, which is never a bad thing in my book, because the boy can act. Same for Jeremy Sisto (MAY, THE THIRST, DEAD & BREAKFAST)…I love watching him show up in a horror movie, doing his Sisto thing, then dying horribly…it’s awesome, I love him for it, and I always look forward to more. He was on the road to becoming a male version of Tiffany Shepis in that sense (only he keeps his clothes on, sorry ladies), but sadly gravitated towards network television instead. My future ex-wives Dushku & Chriqui were also on hand – the latter unfortunately wasn’t given much to do other than scream, run, and bleed, but she handled that role quite well. Miss Dushku though, came with a 55 gallon drum of whoopass, and it had the inbred hillbillies’ names written all over it!! She never lets me down. Speaking of which, our killers were perfect in my eyes and did what the best on-screen killers do – stayed ugly and killed the sh*t out of whatever they could get their hands on with no mercy and smiles on their deformed faces. 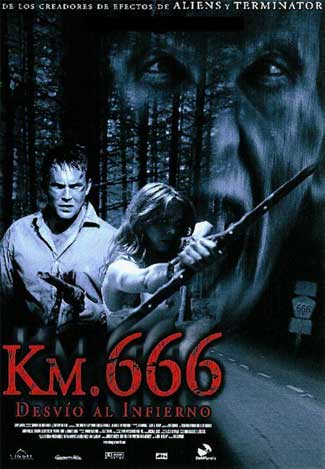 Director Schmidt did a dead-on, almost perfect job here – he kept things simple to maximize the impact of the story, and delivered not only on the stylishly gory kills, but had a strong feel for some nail-biting tension in several scenes. I’d like to see this guy come back to doing more balls-out horror movies like this one. 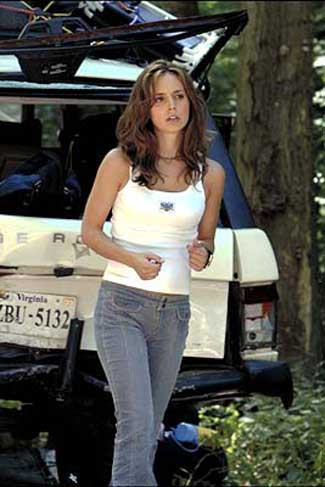 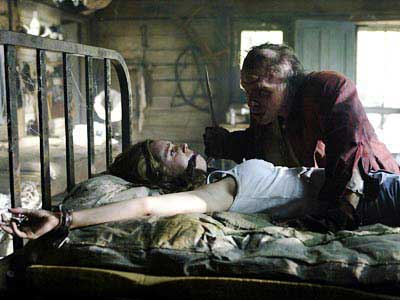 LAST WORDS:
With some horror movies, I don’t mind having to pay attention at all times and actually use my brain here and there. But then there’s times (more often than not these days) that I want a good old fashioned 70s-style balls to the wall popcorn and beer type of flick like WRONG TURN. If you’ve seen DELIVERANCE and/or the original THE HILLS HAVE EYES, then you know what you’re in for in terms of content. It won’t be the most original horror movie you’ve seen in the last 30 years, but it won me over by being full of tension, shock, a few cheap laughs, and an unapologetic brutality to the kills that will leave you exhausted and begging for more!!