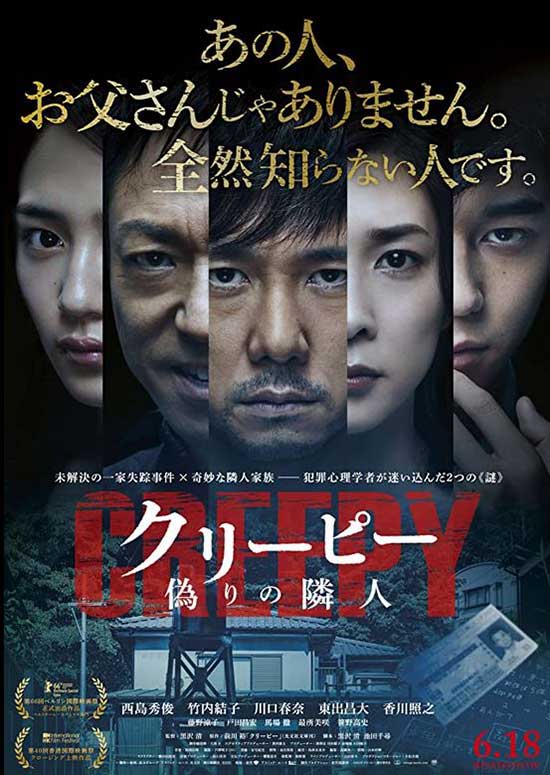 Takakura is a former detective. He receives a request from his ex-colleague, Nogami, to examine a missing family case that occurred six years earlier. Takakura follows Saki’s memory. She is the only surviving family member from the case. Meanwhile, Takakura and his wife Yasuko recently moved into a new home. Their neighbor, Nishino, has a sick wife and a young teen daughter. One day, the daughter, Mio, tells him that the man is not her father and she doesn’t know him at all.

The name Kiyoshi Kurosawa is a name undoubtedly known to most j-horror fans. He is the man behind the thriller-horror hybrids Cure (1997) and Kairo (2001), as well as one of the best haunted house horrors ever made, Sweet Home (Sûîto Homu, 1989). Throughout his lengthy career he has explored the realms of science fiction, crime and horror from various different point of views, often with a deep phycological take on the subject. Based on the 2012 novel by Yutaka Maekawa, Kurosawa’s 2016 thriller Creepy continues along the same lines as his previous work, with an introspective yet intense look at a cat and mouse game between a retired detective and a possible serial killer.

Th story starts with a detective Koichi Takakura (Hidetoshi Nishijima) being involved and getting injured in a failed escape attempt of a dangerous criminal. Not wanting to continue in the police force, he together with his wife Yasuko (Yûko Takeuchi) move to a new neighbourhood closer to his new job as a university lecturer in criminal psychology. Being the lovely person that she is, Yasuko tries to get to know the new neighbours by introducing herself and offering small greeting gifts to break the ice.

While the Tanaka family rudely turn her away, it is her encounter with Mr. Nishino (Teruyuki Kagawa) living between her and the Tanakas that truly unnerves her. Things aren’t helped by Koichi’s subsequent encounter with the man, where he chastises him for having such a nosy wife. Nevertheless, the eccentric neighbour eventually wins the pair over by introducing them to his daughter and opening up about his life, and all seems fine in the neighbourhood. Meanwhile Koichi has become interested in an old cold case concerning a disappearance of a family of three. The only witness to the event, the family’s daughter, has only vague memories of what happened and offers little to no help in the investigation. The more Koichi investigates the case and the more he gets to know his new neighbour, the more he becomes convinced the two are somehow connected, leading him to a dangerous path of deceit and murder. 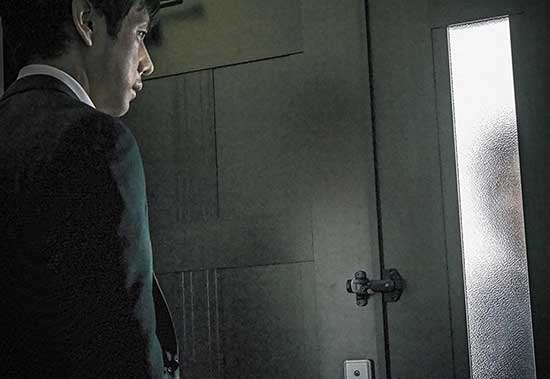 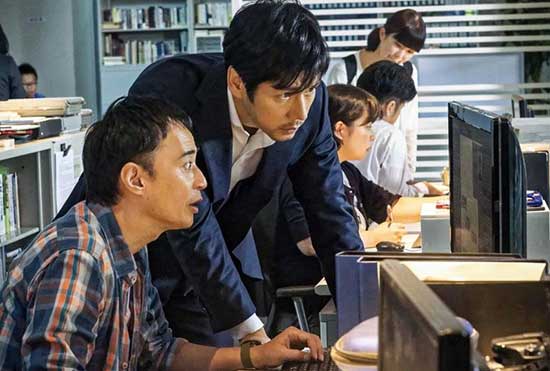 Kurosawa has once again woven an atmospheric tale of intrigue. His take on the story is an unhurried one, taking his time to build the tension between the characters as well as the mystery surrounding them. While it is obvious from the get-go that the case Koichi is investigating and the bizarre new neighbour are somehow connected, it is not by any means clear how. Perhaps there is a direct link, or perhaps all the clues that Koichi so desperately follows are nothing but a series of unfortunate coincidences and the link between Mr. Nishino and the disappeared Honda family is but a figment of his own imagination. Is this a story about a serial killer, or a traumatised man whose professional integrity has been compromised by the tragic events of his past? This is the question that keeps Creepy interesting throughout. 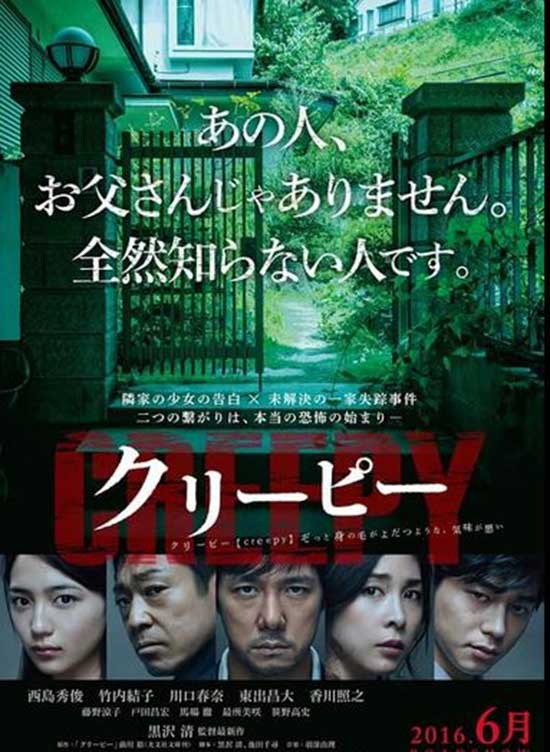 Teruyuki Kagawa does a fantastic role as the unhinged Mr. Nishino. Creepy is indeed the perfect word describe him, yet he is not so in an overtly obvious way, but rather teetering somewhere between a genuinely scary individual and someone with bad social skills.

One minute you feel empathy for him, the next you want to yell to the other characters to run as far and fast as they can. Kagawa has managed to get this balance just right, changing between a sinister creep and an awkward misunderstood underdog with great ease, constantly keeping the viewer on their toes. Hidetoshi Nishijima also offers a decent, if not slightly wooden, performance as the retired detective. While the role does not quite have the same depth as Mr. Nishino’s, Nishijima’s portrayal of Koichi still offers a perfect counterpart to the creepy loner. As Koichi suspicions of his neighbour waver, so does the viewers and Nishijima has done a creditable job with keeping this doubt going all through the film. 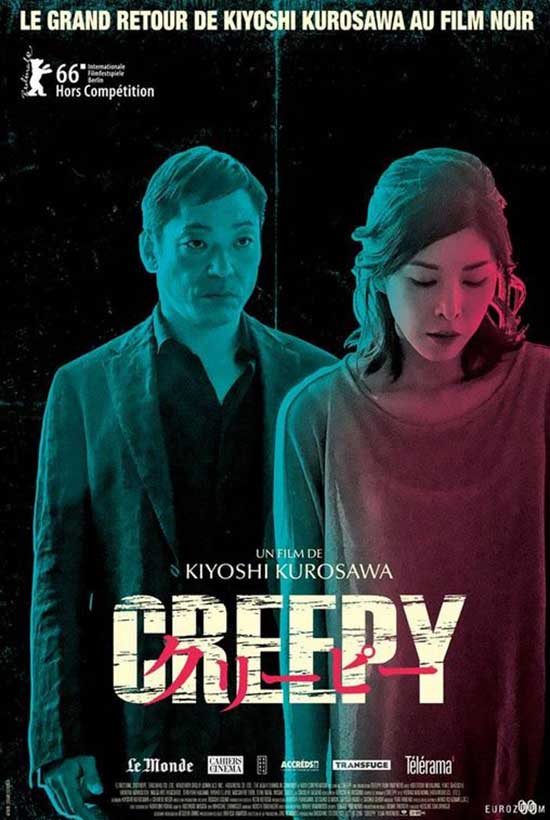 The sedate pace of the story might not be to everyone’s liking and in parts the film does suffer from its overly slow pace, making one question whether it’s ever going to move on. Luckily it does, revealing these moments of calm being an integral part of the suspense. Creepy is a film that will keep you gripped until the very end and even better, leave you with an unsettling sense of threat that is sure to keep haunting you to days to come. Definite must see to anyone who enjoys a good thriller.