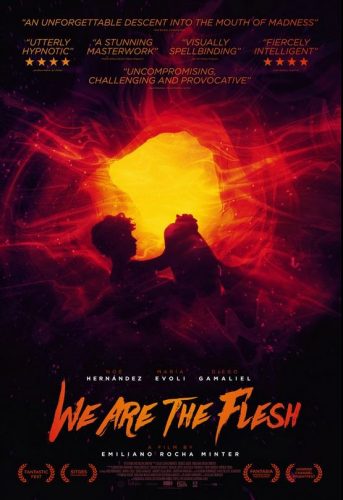 After wandering a ruined city for years in search of food and shelter, two siblings find their way into one of the last remaining buildings. Inside, they find a man who will make them a dangerous offer to survive the outside world.

I usually don’t discuss political events in my reviews, mainly because that’s not what I’m here for. However, I’m going to give you an idea how I feel about We Are the Flesh by mentioning a certain hot topic in American politics. As many of you may already know, our current President wants to build a wall between our country and Mexico. I’m one of the people that feels it’s a waste of time and money. After watching this film, I now want to lay the first friggin’ brick for that wall if it stops more crap like this from crossing the border.

We are the Flesh follows the story of a young brother and sister who break into one of the few remaining buildings left standing in a post apocalypse Mexico. However, the building is already inhabited by Mariano. Mariano has been alone for quite some time, and his mind has taken quite a turn into the realm of mental derangement. He lets the siblings stay with them, but he starts forcing them to participate in his twisted sexual fantasies. From there, the film takes a journey into incest, rape, murder, and cannibalism.

While the movie deals with some rather shocking themes, there doesn’t really be any point beyond showing how demented Mariano is. A lot of the movie is seeing him trying to get the siblings to see his point of view of the world and play out his fantasies. This includes a scene where he gets the youngsters to have sex with each other while he watches and pleasures himself. The actors then proceed to have unsimulated sex on camera, and we even get to see actor Noé Hernández brings himself to a happy finish. However, the story seems to only exist just to show us scenes like that and doesn’t appear to go anywhere. Things happen without any kind of explanation or logic, and the story tends to jump around. Then comes the ending that pretty much destroys the whole setting we’ve been presented. If you don’t scream expletives at the screen at that point, then you have a higher tolerance for b.s. than I do.

Since the movie’s story has no purpose or proper resolution, the whole thing comes across as a reason for the director Emiliano Rocah Minter to showcase his own sexual proclivities. The attempts at being provocative evokes more eye rolls than anything else, and made the film feel like a porn flick trying to disguise itself as a post-apocalyptic thriller. If his main goal was just to shock us, the director has got a long way to go in a world where the movie A Serbian Film exists. Rocah Minter needed to provide something resembling an actual story to provide more context for what happens.

That isn’t to say that there aren’t a few good points to take away from We Are The Flesh. The acting is pretty solid throughout, with Noé Hernández’s performance as Mariano really adding some real bite. He manages to add a certain charisma to a very deranged character. He provides a lot of charm and dark humor while managing to show the madness that is the heart of the character. He never lets you forget that Mariano is very dangerous. With the way Hernández handles the role, he makes you believe Mariano could be the Devil himself. We’re talking the kind of Devil that is always a threatening presence but has the kind of magnetism that encourages people to become corrupt themselves.

Another big plus was the setting itself. I don’t know if the set was built or if they crew filmed in an abandoned building, but it truly looked like something that barely survived an apocalyptic event. It was dirty and grimy, looking ramshackle at best. The cinematography was also equally up to task. Everything was well shot and framed. The placement of the camera in each scene helped give a very close, claustrophobic feeling. Whatever his faults maybe, Rocah Minter at least knows what he wants out of each scene.

Despite the positives I mentioned, I can’t recommend this movie at all. It’s a mess of a film that goes nowhere fast. It’s just a series of scenes to showcase how twisted Mariano can be and the effect he has on those around him. When I first saw the trailers for it a few months ago, I thought We Are The Flesh showed a lot of promise. I wanted to like this movie, I really did, but the overall experience was a disappointment. Do yourself a favor and avoid it.