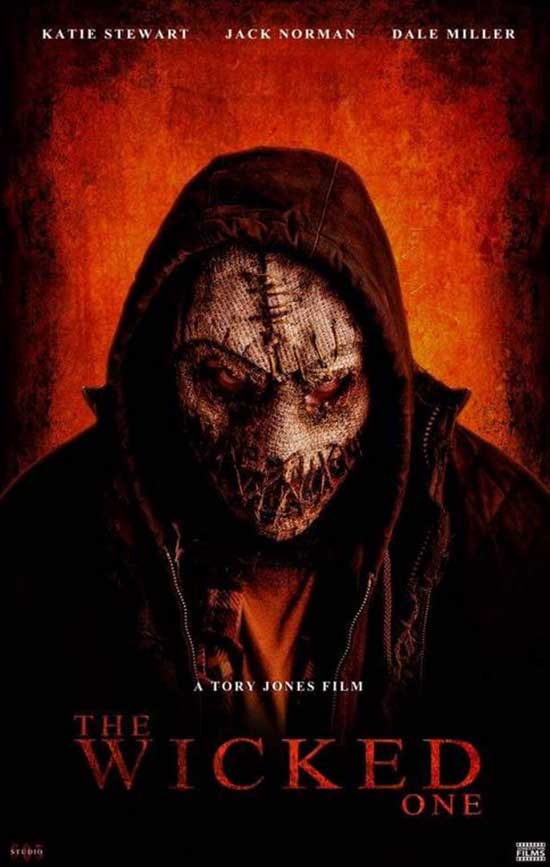 Friends heading to a country house run a fowl of a masked serial killer with ties to the land. They have the killer outnumbered, but that doesn’t mean much when the killer won’t stay dead.

The Wicked One (2017) is an entertaining, if uneven, no-budget slasher entry that plays out like a backwoods version of John Carpenter’s Halloween (1978). The inspiration isn’t surprising, as director Tory Jones (The Killbillies 2012) directorial debut was the fan-film Halloween Homecoming (2009). Playing double-duty as cast member and script writer with Jones is Cheyenne Gordon (Scream for Summer 2017), and the pair actual manage to squeeze some natural performances and dialogue out of a cast that’s all-to familiar with low budget horror flicks. Ultimately, brisk pacing covers occasional dragging caused by talking heads and special effects that begin and end with fake blood in a squeeze bottle.

If it sounds like I’m at all hating on The Wicked One, it’s not my intent. While the camera work, visual quality, and audio crispness occasionally dip into the “poor” category, the characters populating this high body-count film are surprisingly likeable, and almost always avoid doing the unrealistic and stupid things that plague the slasher genre. I say almost, because the ending has lazy-script syndrome, causing several characters to die because of choices both unmotivated and out of character. Again, these are mostly forgiven because of the quick pace of events playing out onscreen, as well as some solid performances.

In the lead character slot is Katie Stewart (Darkling 2014) as Alex, who is heading to her old family homestead with drug-dealing miscreant brother Travis (played by scripter Gordon), boyfriend Adam (Dale Miller, Mom and Dad 2017), and friend Olivia (Sonya Delormier, Lost Creek 2017). There are other tertiary characters that serve as nothing more than bodies for the butchering, but these core four actually manage good chemistry (although Stewart is stuck with some over-wrought melodrama that drives the quality of the film into the “home movie” range during the few slow moments). Standing out among the cast are Delormier and Gordon, whose budding romance feels genuine on screen and lends tension to the bloodbath comprising the film’s conclusion. Behind the killer’s mask is massive actor Jack Norman (Blood Moon River 2017), who does fine with the physical demands of a Michael Myers-archetype. Some of the small players throughout the movie, especially those in the sanitarium (which looks to be a rural dorm, perhaps?), offer weaker, occasional laughable performances. Still, as their function is solely to become dead meat, no harm, no foul.

Given that the film is a slasher flick, perhaps the most disappointing aspect is the manner of killings and the effects, or rather the lack thereof. As previously mentioned, there are copious amounts of fake Party City blood, but zero practical gore effects are employed. As a lover of shot-on-video rental fair of the 80’s, I’m a firm believer that a goofy looking gore effect is hands-down more entertaining than foregoing such effort, which is exactly what The Wicked One does. As genre staples like Donald Farmer have proven time and again, budget really isn’t a reasonable excuse to wholly forgo practical effects, and yet all this movie offers are splatters of the sticky red stuff again and again. In other words, the stabbings and neck-snaps on display aren’t going to make any gore hound’s day.

With that said, it’s doubly remarkable that I mostly enjoyed my time with The Wicked One, and am pleased that Jones is releasing the sequel, Wicked Ones, this year (2020). Hopefully, he and fan-film experienced newcomer Nathan Thomas Milliner will be able to craft a script with likeable characters and believable relationships ala this first entry. If they do, and some real special effects are put on display, their sequel might surpass this no-budget win.