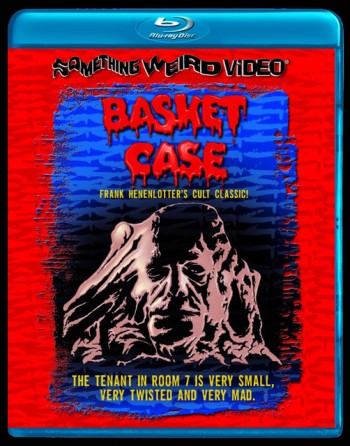 Duane has shown up in New York City with only a big wad of cash, some clothing and a strange basket that he seems to carry with him everywhere. What’s in the basket you might ask, and a lot of characters in the film do. Well in order for me to answer that for you I would have to explain Duane’s very strange past to you, starting with the fact he used to be a conjoined twin.

“Our mother died giving birth to us. He was attached to my right side. They wouldn’t let us go to school or anything. They kept us hidden. We were the ‘big family secret’. everybody hated us, except our Aunt. See, he likes the dark. He doesn’t like to be seen, not even by me sometimes.” 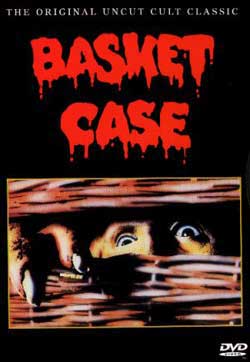 Frank Henenlotter’s 1982 genre classic is a great case of how the mom and pop video rental business helped pushed small independent titles. There wasn’t a video rental store within three miles around here that didn’t have a copy of Basket Case, and just like most of the characters in the movie we wanted to know what was in the basket? 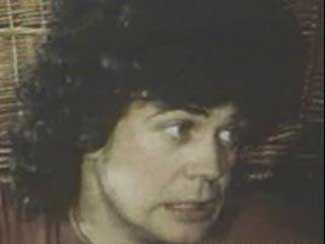 Basket Case starts by showing a young man named Duane checking into a really sleazy motel in New York City. Duane seems like a normal guy moving to the city, except he seems to be carrying around a rather large basket with a lock on it. The regulars at the motel really don’t want to let Duane lease from them, however after seeing a rather large amount of cash in his person (rumor is that all of the cash used in this scene was actually the movies budget!) decide to let the young man stay. One of the regulars of course stares a little too hard at the wad of cash, but don’t worry he gets what is his in the end.

Why did Duane come to the big apple you ask? Well its kind of complicated you see Duane is actually a conjoined twin, siamese twin for those who are politically incorrect. Where is Duane’s brother you might ask, well you see he is what Duane carry’s around in his basket. Duane’s twin brother is of course named Belial. Duane and Belial had a rather strange growing up which is shown using many flashbacks throughout the movie. The twins killed their mother while they were in the process of being born; this of course sent their dad into fits of violent rage. The father of course wants Duane to have a normal and healthy life, and the only way for him to do that is to remove Belial from Duane’s body. Instead of taking Duane to a doctor like any loving father would do however he decides to call a group of veterinarians over to do the dirty job. Belial is removed and immediately thrown into the trash, did I mention that Belial can communicate with Duane using telepathy, well now that I have that one thrown out there it doesn’t take long for Duane to realize that his brother is actually alive and attempting to dig his way out of the trash. 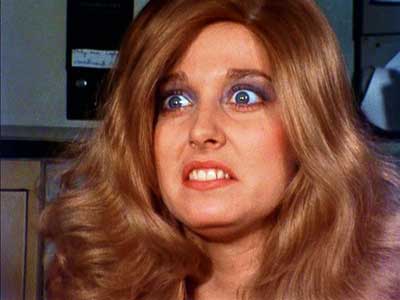 Duane quickly begins to hide his brother while they begin to plan their revenge. The first victim in their revenge is of course their father, his death is made to look like an accident of course and Duane and Belial are sent to live with their aunt, who is the only woman who has ever loved the both of them. Duane and Belial have arrived in New York City to of course find all of the veterinarians who were responsible for their separation and make each of them die a wonderful gore soaked death. 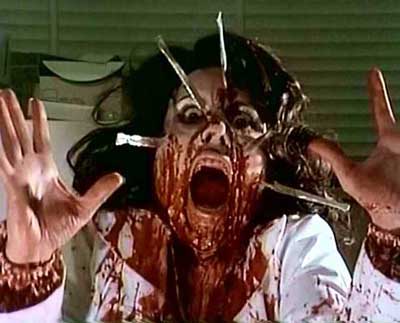 While dealing with all of this murder Duane meets and falls in love with a secretary named Sharon. Sharon seems to develop a kind of crush on the boy from out of town and offers to take him on a tour of New York City. Duane agrees and leaves Belial alone in the hotel room; don’t worry though he left him food and a television sitting right in front of his basket. Remember when I told you about their telepathic link up there a paragraph or so ago well apparently Belial can also feels the things that Duane feels. I don’t think I really have to say what happens when Belial feels Duane and Sharon kiss, though I really must comment on the stop motion sequence of Belial trashing the hotel room I honestly believe you have not lived until you have seen this sequence in the film. Belial decides that it is time for Duane to remember where he is has come from, and why they are in the big city after all. Most importantly to Belial though is that it is time for Duane to learn the meaning of the age old saying “bros before hoes”. 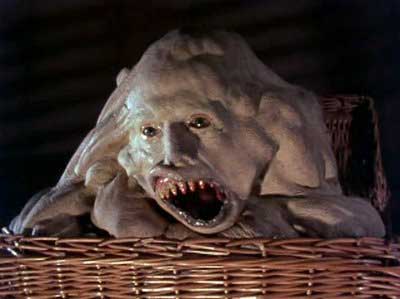 Basket Case is definitely a fun movie, yes the acting is horrible yet the cast looks like they are authentically having a good time, and most of them probably thought they were making a legitimate film. The main focus about the movie however is the gore, and boy is there a lot of it even it if it does look very cartoonish at times (which only adds to the charm of the movie). There is a little something for everyone in the film there is comedy, gore and the classic tale of brotherly love and Henenlotter isn’t scared to go to extremes to show all of these to the view; including of course a wonderful death scene involving syringes. 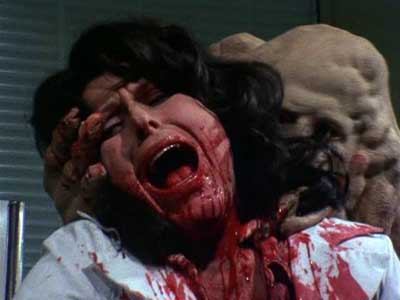 The main thing most viewers leave this film with though is Belial himself. Belial is a puppet of course, sometimes he is a hand puppet and other times he is a stop motion puppet. He pretty much looks like an ugly head with a mouth full of sharp teeth and two tiny arms. The scenes where Belial attacks his victims are either the large puppet held firmly on the victims face, or the shots of Belials hands doing the dirty work (obviously a hand in a glove). The actually puppet is kind of frightening looking, and in the later sequels was made to look more appealing to viewers. In the original script there was supposed to be a scene involving Belial walking down the streets of New York City, however budget restraints wouldn’t allow it so instead Henelotter shot a scene of Belials brother running naked down the street to symbolize that Belial was being mobile, I think that scene has confused most of the people that I have shown this movie. 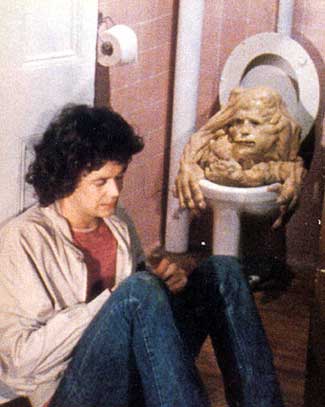 I highly recommend Basket Case, I really do not know of many people who do not like this movie. Just sit back and look past the bad acting and the shoddy FX and think back to the days when anyone with the cash could make a movie about what ever they wanted, wait that goes on today….well thanks to movies like Basket Case this phenomena continues today. A true classic and no gore hounds library is complete without it.

Basket Case is now available from Image Entertainment on Bluray