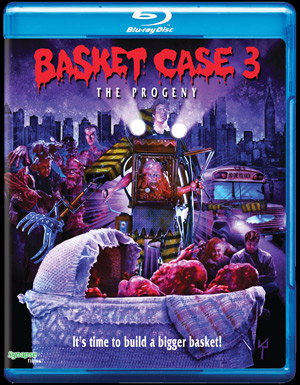 The saga continues as Duane recovers from his delusional breakdown to find his freakish basket-bound brother Belial will soon become a father. But not everything is joyous as the once tight knit brothers no longer seem to trust each other.

Filmed back to back with “Basket Case 2”, director Frank Henenlotter’s third entry of the franchise picks up exactly where the second one left us. Namely with poor Duane (Kevin Van Hentenryck) re-attaching the twisted, deformed body of his twin brother Belial back onto his right side. He did this against his brother’s wishes because Belial had found love with a similarly deformed female mutant and has managed to impregnate her. But Duane was having something of a nervous breakdown and felt that re-attaching his love struck brother would solve all of his issues (It didn’t). Henenlotter was kind enough to include the last few minutes of part two just in case you might’ve missed it to get you up to speed for the rollercoaster ride that is part three. 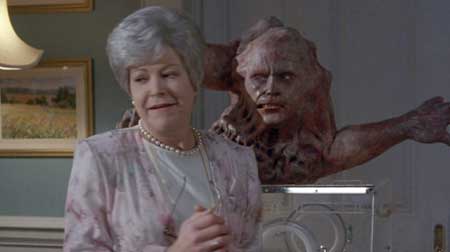 All of the characters introduced in pt. 2 return including the wonderfully cast Annie Ross as Granny Ruth, the woman who has made it her life’s work to protect and raise a menagerie of freaks that have been shunned by society. In fact her own daughter, Susan (Heather Rattray), seemingly normal is in fact the mother of a freak that just doesn’t feel like being born just yet although it will pop out and make an appearance if she asks it to! But the focus here is Belial and the mother of his soon to be born children, Eve (Denise Coop). Granny Ruth has decided to take the whole group to a small town in Georgia where the one physician she trusts enough to deliver Belial’s child lives. 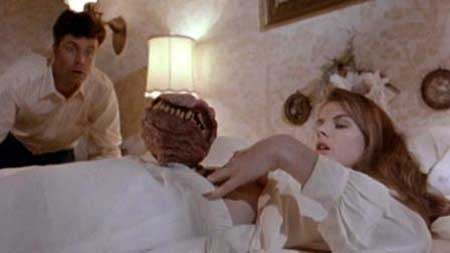 So she gathers them all up into a bus and off they go to visit the good doctor, otherwise known as Uncle, Hal (Dan Biggers) and his son little Hal (Jim O’Doherty) who is a technology buff who invents all sorts of gadgets that seem to have the run of their house. But little Hal keeps to himself most of the time although he does pop his head out from time to time to offer a friendly “Hello”, but just his head. We soon learn that little Hal is actually Granny Ruth’s son and the true reason she has taken so many outcasts under her protective wing.

So Belial has been separated from Duane and is anxiously awaiting the birth of his child but meanwhile the sheriff has taken notice of the new neighbors and has set his deputies to flush out the freaks at any cost. Of course Granny Ruth & her brood aren’t going to go down without a fight although they weren’t looking for one. When Eve goes into labor the entire clan helps out which is necessary since she isn’t your average pregnant mom and this isn’t a typical childbirth. In a scene that still has to be seen to be believed Eve eventually gives birth to twelve little baby Belial’s (And I mean that literally, they look just like their daddy)! As little Hal notes midway through the procedure “They’re popping out like Pez! Later in the film the sheriff discovers where Eve and the kids are recuperating and he kills her as she attempts to protect her kids. He then scoops up all of the little ones and incurs the wrath of not only Belial but Granny Ruth and her unconventional brood as well. 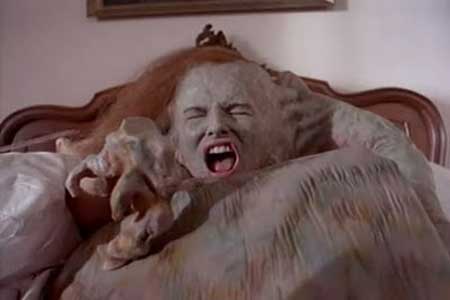 You know I just gave you a fairly detailed description of the plot sans a couple of scenes but you can just trash all of what I just wrote because in essence “Basket Case 3” is just 90 minutes of hysterical, over the top madness that actually begins to wither on the vine if you try to analyze it too deeply. Working with what was probably the biggest budget he had for the three films, Henenlotter leaves nothing out here: sex, nudity, bondage, over the top violence, freaks and the people who love them, blood, gore, a musical interlude, the kitchen sink & most anything else you could think of. In addition to all of that he tosses in all kinds of latex faced mutants that are running amok! Gabe Bartalos & crew have their work cut out for them but they rise to the challenge and while some of the masks are fairly expressionless & stiff the lion’s share of the prosthetics are convincing enough. 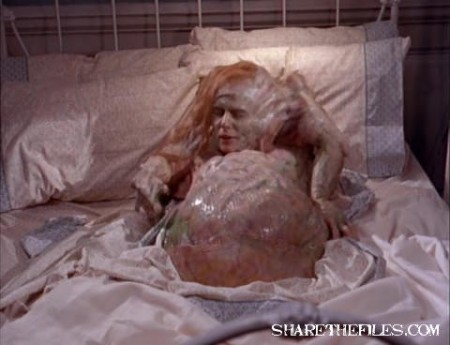 It’s hard to gauge the quality of the acting on display here since no one on screen is taking any of this stuff seriously but Annie Ross has an extremely warm & nurturing air about her that only made me fall in love with her character that much more. Her smile is both ingratiating & maniacal at the same time. As Duane, Van Hentenryck ought to be part of the focal point of the film (Along with Belial of course) but he seems more than willing to stay in the background and leave most of the heavy lifting to his peers although he does have his moments in the sun. Especially a scene in which the sheriff’s daughter finds him in a jail cell and decides that he ought to be punished for whatever it is he’s guilty of and she’s just the girl to do it. Throughout the series Van Hentenryck has never allowed Duane to lose the innocence that Henenlotter wrote into the character from the outset. 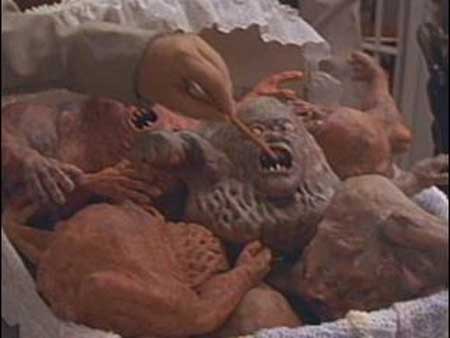 In between all of the madness there’s a nice homage to “ALIENS” involving little Hal and one of his creations (At least I thought it was inspired by Cameron’s classic but this flick is so wacky who knows)? Executive Producer James Glickenhaus has a bit of history with over the top film fare (“The Exterminator”) and he allows Henenlotter & his crew free reign to produce a movie like no movie before it and no movie since quite frankly. It & it’s immediate predecessor have a much campier tone than the original “Basket Case” but don’t hold that against them. While “Basket Case 2” wasn’t as effective in either scaring or weirding it’s intended audience out as it should have it was still an interesting and unexpected direction for the franchise. “Basket Case 3” is just the logical sequel to it. They couldn’t go backward so the production just decided to throw all sense of propriety out the window and create one of the loopiest films ever made. It’s not scary at all & some of the makeups do look amateurish & rushed but it has it’s heart in the right place and it’s never anything less than completely captivating. 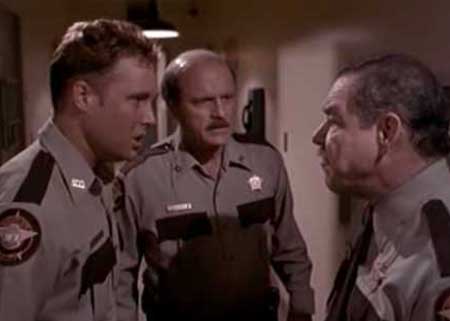 If you’re a fan of wild & out of it’s mind cinema then “Basket Case 3: The Progeny” will satisfy like few films before it. You really cannot beat the combination of the assorted freaks, their matron & a horde of little Belial’s being born in the midst of all the madness. It has something for everyone (It really does) and I bemoan the fact that a fourth entry has yet to be produced. Then again, if it was to be made today “Basket Case 4” would almost certainly be chock full of CGI effects and that would kill 95% of what makes “Basket Case” such a beloved series. If I can’t have a rubber Belial then I don’t want a fourth film to be made. It needs to stay gritty and true to the original film’s sleaziness, CGI just won’t cut it. R.I.P “Basket Case” series…you went out on your shield with this one!

Basket Case 3: The Progeny (1992) is now available on bluray per Synapse Films 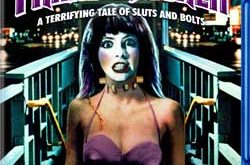