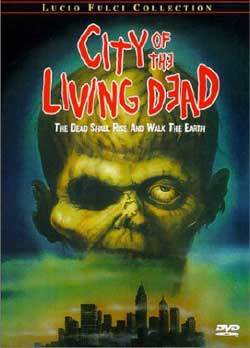 A reporter and a psychic race to close the Gates of Hell after the suicide of a clergyman caused them to open, allowing the dead to rise from the grave

“The soul that pines for eternity shall out span death. You dweller of the twilight void come Dunwich.” From the get-go we’re served a chilling, culinary delight of terror from Italian horror legend Lucio Fulci. The use of rolling fog and mist eclipse into something sinister that is simply taken for granted in today’s horror films. Fulci not only has a firm grip on what fears us as an audience, he exploits our disdain in shocking revelation. 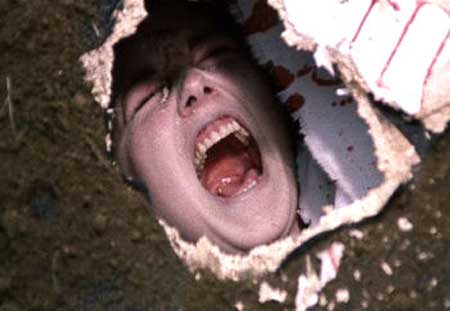 As Father William Thomas strolls solemnly through Dunwich’s cemetery we not only sense his impending doom, we feel it, experience it with each hallowed step. Ultimately the man of the cloth hangs himself and opens a gateway to hell. Kudos to the special effects/make up artist Franco Rufini for illustrating a grayish, decayed, soul-less expression upon the dangling priest that is sure to make your skin crawl.

Our next scene fades into a séance in progress. As the camera pans out at first we think we’re being force fed copious amounts of cheese. Never fear non-believers, this is no hokum ceremony. Around the medium’s table each protagonist sits hand in hand. We’re once again (see author’s review of The Beyond) graced and bedazzled with cinematic eye candy Catriona MacColl in the role of Mary Woodhouse. 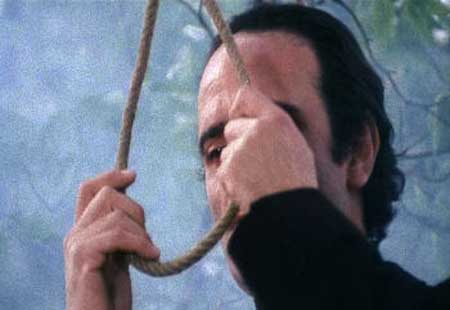 Surely MacColl has induced her fair share of cardiac arrest but this tie it is she that succumbs to an untimely death. Our hearts sink as our knuckles whiten with gripping tension as Mary (MacColl) howls like a banshee collapsing to her demise. Her psychic visions of Father Thomas and the bowels of hell frighten her to the point of death. Fulci displays this disturbing episode flawlessly as we the discerning horror fan know in our guts we’re onto something special here.

As we mourn the passing of our vixen scream queen our plot moves to a cut that mirrors any exploitation flick. Sgt. Clay is on the scene probing Mary’s mysterious death. Medium Theresa is memorably quoted: “You don’t deserve help! You’re a comic book version of a detective, Sergeant!” The dialogue and exchange is laughable yet one suspects this may be precisely what our fearless director was going for. Needless to state, we’re invested into the characters and their circumstances that unfold.

In some of the most twisted execution of set design and effects in recent memory we witness Mary fully prepared for burial inside a solid casket. After another hearty dose of tongue in cheek dialogue among the cemetery workers, the camera zooms into Mary’s face panic stricken while tearing ravenously upon the coffin’s satin interior. Yes indeedy scream fans this is the sort of imagery insomnia is made of. 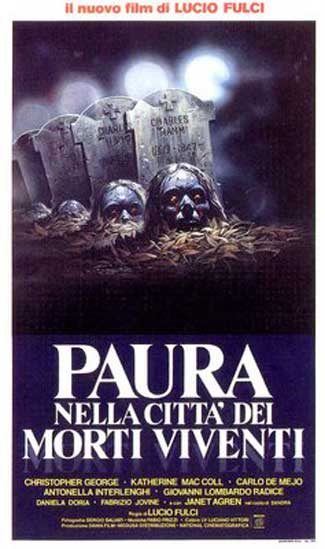 Reporter Peter Bells (Christopher George) sniffs around the graveyard and in true cavalier fashion digs up the surviving beauty just in time. And this ghoul groupies is just where the fun begins. 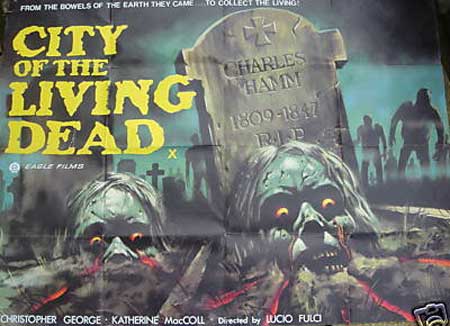 Peter and Mary (coincidental biblical reference? Hmmmm) race against time and the forces of evil before the dawn of All Saints Day to find the burial site of Father Thomas before hall hath no fury for eternity upon earth. 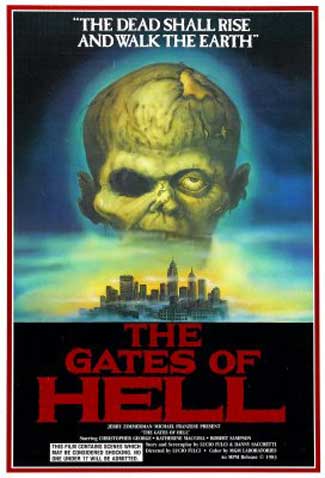 Veteran film maker Lucio Fulci preys upon our last frazzled nerve combining all the necessary emotion for a roller coaster thrill ride. When he doesn’t terrify us out of our seats with shattering glass he makes us cringe with blood riddled tears in stigmata like visions. Oblivious and desensitized to these elements; just try and sit still through the wet, sloshing sounds and landslide of regurgitated organs seeping through select victim’s mouths. Once again the make up/special effects team truly out did themselves. 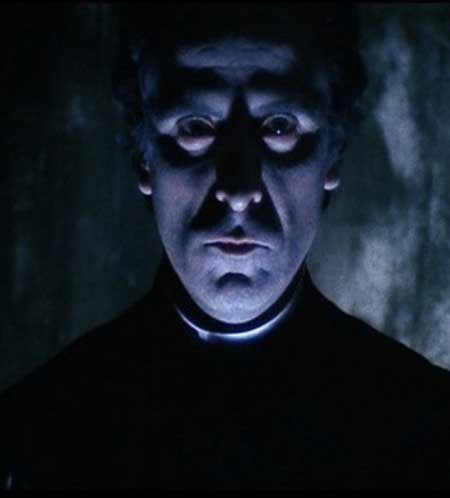 Another bout of gagging and gut wrenching gross out involves our band of heroes and a certain rain of maggots. Looking at the writhing, wriggling sea of organisms I’m hard pressed to consider how this could possibly be emulated without using the real McCoy. Our pride of protagonists unearth the priest’s burial site to engage in a holy war that has a climax out of this world-a resounding four out of five tombstones.