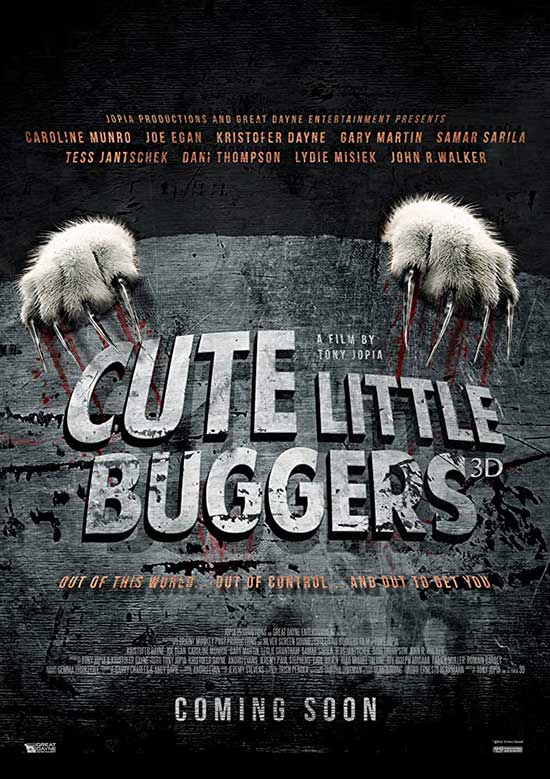 From the Director of ‘DEADTIME’ and ‘Crying Wolf’ comes Cute Little Buggers! Will you let them take our women? It’s Gremlins meets Hot Fuzz set in the English countryside. When hostile aliens crash land on local farmland the villagers at the summer ball get suspicious when young women start going missing. The villagers soon band together around our hero Melchoir to fend off the invaders and bring back peace to the sleepy English countryside! B-movie laughs in this creature feature from Director Tony Jopia.

Since I first experienced the unbounded joy of laughing and screaming within the same instance (or as close to it as is possible) while watching the 1948 classic Abbott and Costello Meet Frankenstein at about the age of 11, I’ve been fascinated by what makes the perfect balance of horror and comedy in a film. Some filmmakers, like Charles Barton in the above film and John Landis with 1981’s An American Werewolf in London, absolutely have nailed it while far too many others have struggled mightily (to be kind). Along comes Chilean helmer Tony Jopia’s flawed but generally engrossing and darkly amusing comic chiller from 2017 Cute Little Buggers.

Aliens crash land in a small village on the English countryside, taking possession of bunny rabbits as defense in a plan to kidnap women for reproduction purposes. Locals participating in the village’s summer ball party band together to fend off the cute, furry yet ravenous monsters and try to stop the invaders. 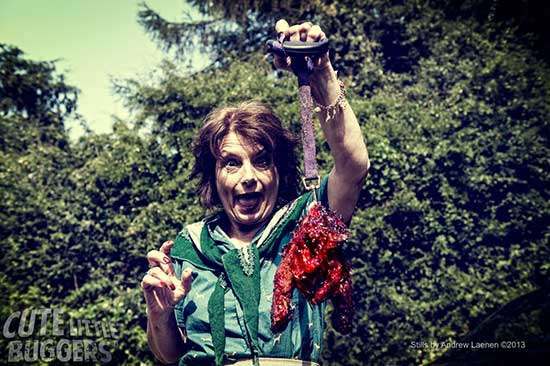 Jopia has quite the recent history with genre mashups with the neatly mixed laugh/chill fest Crying Wolf 3D in 2015 and the rock music/horror opus Deadtime a few years prior. His approach is sound in that he seems to have a knack for finding just the right balance with each element shining its own spotlight rather than being subservient to the other. Lesser movie-makers tend to trust one subject less than the other and lean on it, leaving a picture feeling decidedly lop-sided and the audience walking away with thoughts of a missed opportunity. Like Landis and Barton above, Jopia has the keen sense (perhaps a skill in itself?) to rely heavily on a smart script and assembling just the right roster of actors to pull off even the cheekiest of dialogue.

On the story front, Jopia (with a “Created by” credit) joins with Kristofer Dayne, Garry Charles and Andy Davie in plopping quirky, every day folks (with a thin layer of eccentricity added for good measure) into a nightmare scenario and allowing the viewer to watch how these denizens react or respond to it. That our heroes and heroines respond with an almost “time to go to work” mentality is merely one of this cinematic entry’s charms. The dialogue is quite ripe and a suitably goofy match for the characters. Especially stuff like what comes from the local animal expert regarding the terrorizing Bugs Bunny beasts. “What we have stumbled on must be a new species!” There’s a frenetic urgency behind the uttering of those words that I found gave me more than a chuckle. The scene of some of the protagonists facing down a line of the furry critters blocking a roadway brought thoughts of a wacky High Noon-ish confrontation. Is Gary Cooper going to show all of a sudden as Elmer Fudd? 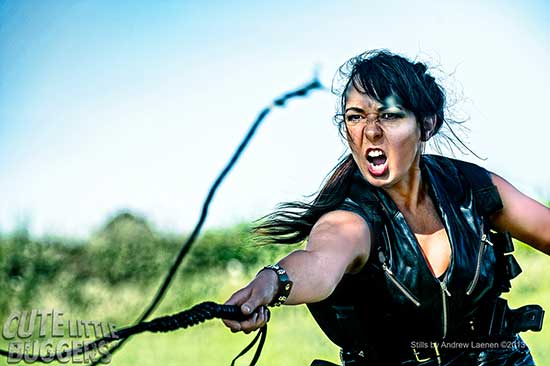 The cast certainly aids in delivering the fruity dialogue with aplomb. Veteran horror star Caroline Munro (of Hammer Films and James Bond fame) headlines as the slightly cracked local fortune teller Mystic Mary. This is a role type she has long since mastered and here is no exception.  A combination of precise comic timing with flints of steel-eyed gaze sincerity help you forget the nonsense she is babbling out. Kristofer Dayne, stepping in front of the camera as the lead hero Melchior, adds a certain steadfast deliberance in the middle of the chaos along with more than ample charm to hold the viewer’s interest.

It is no surprise regarding Dayne’s deftness and skill in the adding of subtle nuance to his parts. A 2011 graduate of the Stella Adler Academy of Actors in Los Angeles, Dayne honed his talent under the auspices of one of the acting giants in the industry. A favorite quote of mine from Adler, comes to mind as it pertains to Dayne here: “Acting is in everything but the words.” A simple, yet pointedly cogent, remark if there ever was one regarding the thespian process summed up. 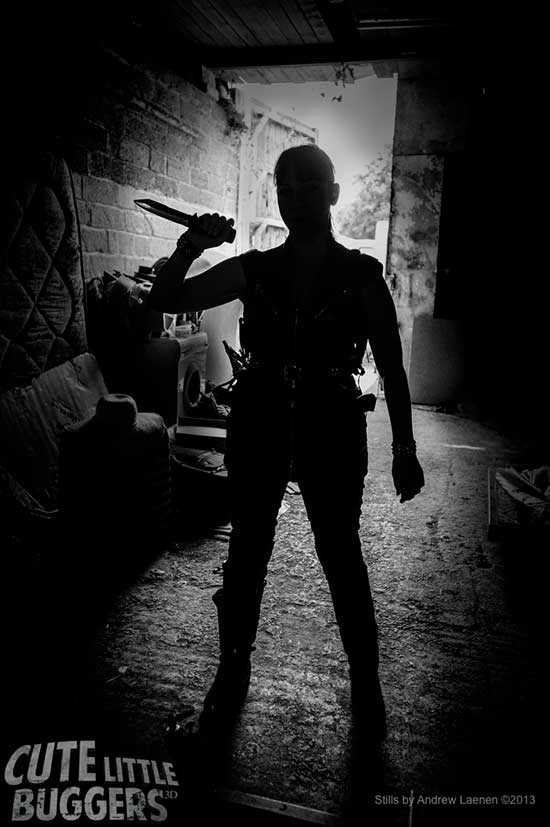 Kudos to actress and singer Sara Dee for not only assaying the bitingly funny PC Hitchins onscreen but also contributing as vocalist and songwriter (with Martin Pavey) to the soundtrack with the ridiculously silly and laugh-out-loud songs So Cute and Hoppittee Heart. They rang through my head for some minutes after the final credits rolled.

If you are looking for fare that has the right meshing of jokes, gore and off-kilter auras that have you pleasantly recalling Barton, Landis or even an Edgar Wright of Shaun of the Dead fame, you could do far worse than catch Tony Jopia’s Cute Little Buggers. It’s not every day that a cinematic effort has you going “Awww! So cute!” followed by a bloodcurdling scream and running for the hills.