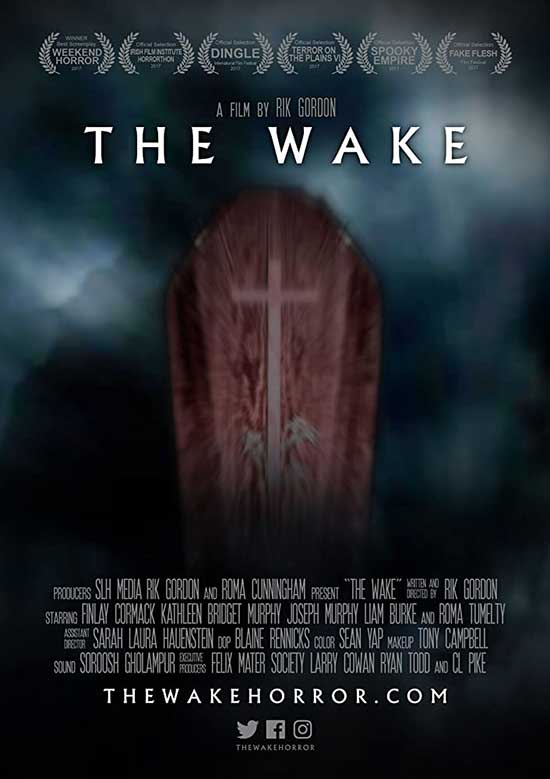 A young Englishman is led to a traditional Irish wake, but he soon finds out that some of the customs are not so traditional.

More short films, kiddies! Today we have THE WAKE, written and directed by Rik Gordon.

We all know what a wake is, right? Sort of the funeral after-party. There’s different names and traditions associated with this practice. In the Irish tradition we drink and sing to remember and celebrate the deceased. Its sort of a “sitting up with the dead” scenario where the after-party usually has the deceased in attendance.

In this film, Peter (Finlay Cormack) is a young Englishman accompanying his girlfriend Claire (Kathleen Bridget Murphy) to the wake for one of her relatives. They arrive at an old farmhouse in the Irish countryside, where they are almost immediately seperated. Peter joins the men in the kitchen where the drinks are poured and the songs are sung while the women gather in the other room with the deceased.

The evening doesn’t quite go as planned for Peter, and he obviously doesn’t truly understand the traditions of his girlfriend’s family. If he did…well, he wouldn’t be there and we wouldn’t have a movie.

This was a brilliant short Gothic/folk horror story. I will not ruin anything by talking about it any further.

I do want to point out the performance of one of the male mourners, played by Celtic musician Matthew McGrath. He starts the song “Danny Boy” as the drinks begin to flow and let me tell you something…his voice is amazing. if for no other reason, please watch this film to hear this man sing.