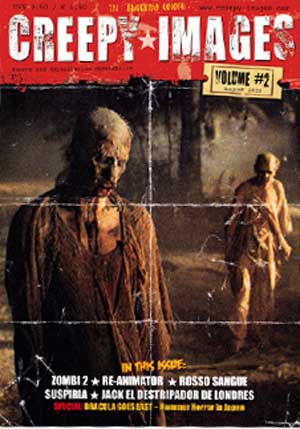 Are you a horror collector, enthusiast or just admirer of classic movie memorabilia? How’s you interest in stills and lobby cards that at times never even make the movie cut? I think I found the magazine for ya. Creepy Images now on its 2nd release aims to please and delivers what it intends. Quite frankly beautiful in its full color pages, it’s small and petite but fits nicely on the shelf next to those “Asian Cult Cinema” magazines which are printed on similar size.

The latest release digs out some killer shots from “Zombi 2”, “Re-animator”, “Rosso Sangue”, “Suspiria” and some long name I can’t pronounce…”Sette Cadaveri per Scatland Yard”. What’s inside? Hard to find poster images, stills and lobby cards. The pleasure comes in seeing some of the great paintings used back in the days to illustrate these films. Maybe even better than the films deserved but they did what they set out to do…sell tickets. Zombi 2 of course has some great zombie pics and poster images. My favorite of the set being the zombie fat man who didn’t appear in the final draft.

You’ll also notice the tendency to really focus on the extreme and gory shots of the films that most likely didn’t find there ways to the local lobby displays. My guess is these served the purpose of promo packs to help entice theaters into stocking the films.

I’m not one to shell out big bucks for hard to find images, so this little read does the job. You get to see and collect the images in magazine format and save yourself 1000’s of dollars…not bad. While some may be expecting alot of text and articles within, really this mag is about the pics. Though as they indicate in the intro that most textual inclusions will most likely increase with reader needs.

Many of the images that are featured from the overseas Japanese market are narrated as being posted under different names than the original titles. In this case, “Shiro” made it way around town as a commonly used title variation. This kind of information does 2 things…makes it harder to track things down and also confuses the buyers as to the real name of the film. Though this is why references are so important to the collectors market.

I often had this problem with the Fulci Zombie films which went under several name variations.This is usually worked out in film collection books which list all the title variations. Well I’m sold ….a few of these titles I’ve yet to see such as the film “Horrible” but am anxious to seek out a copy and compare the images to the screen versions. I’m guessing though that the magazine images will far exceed the color range.

Cool stuff from the folks at creepy-images.com…collect them all and give them as gifts this X-mas to your loved ones!