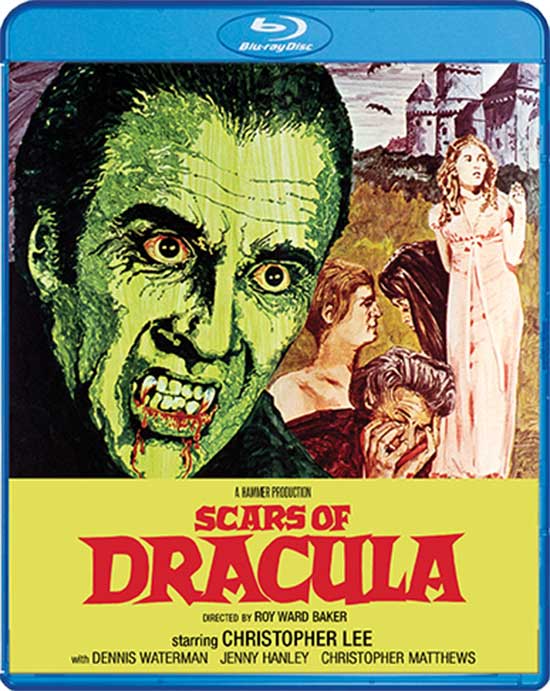 A young man, Paul Carlson, is on a trip and spends the night at Count Dracula’s castle. He is murdered. After some time has passed, the young man’s brother Simon comes to the small town where all the traces end to look for him.

Hammer Film Studios used to be THE studio for gorgeous Gothic horror films. Starting with “Curse of Frankenstein”, the studio brought classic horror characters into the modern world with color, which allowed bright, red blood to flow. No character is better related to the red stuff than Dracula himself.

“Horror of Dracula” released in the USA in 1958 and introduced Christopher Lee as the blood-sucking Count Dracula. He continued to portray the character in a number of other Hammer films. 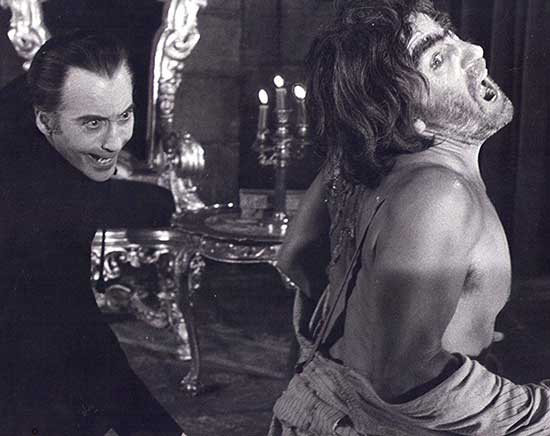 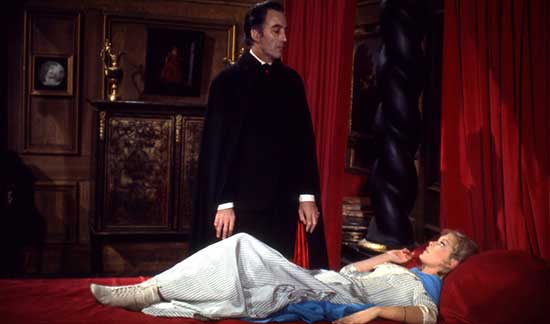 In 1970, Hammer released “The Scars of Dracula”. Lee, according to various sources, was enticed to join the production which indicates he may have originally declined the role. 12 years after creating an iconic image, Lee, and most likely Hammer Films as well, saw that the world had changed, and vampires were the least frightening thing out there. Yet they proceeded with the film.

The film begins with a man carrying yet another young female victim of Count Dracula. He takes the body to the local tavern. The men decide it is time to end the vampire, and they herd the women and children into the church for safety. The castle burns in spite of the vampire’s servant, Klove, warning the villagers that the flames will never reach the Count.

Surprise! Huge vampire bats have butchered every last woman and child, leaving the church walls splattered with blood and gore. Dracula wins again, and the village returns to cowering in fear. 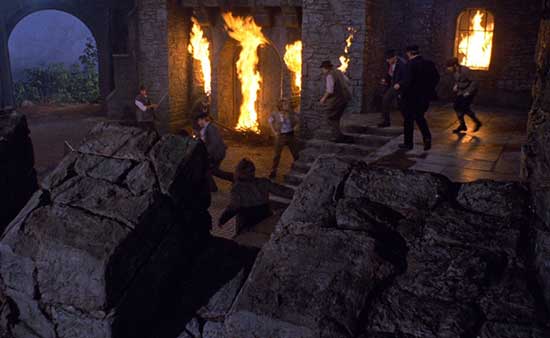 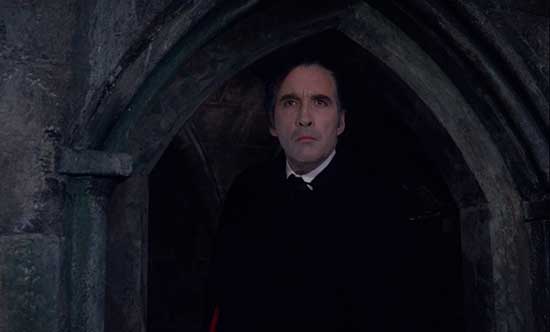 The film jumps to a party for Sarah. Clinging to her side is Simon. She seems indifferent, but he is obviously smitten with her. As the festivities continue, Sarah inquires as to the location of Simon’s brother, Paul, as she seems to crave his presence.

Turns out that Paul is shacked up with the Burgomaster’s clingy tart of a daughter. When he realizes he is missing Sarah’s party, he attempts to dash away just as the Burgomaster returns home. He is accused of assaulting the young lady, but Paul escapes and makes his way to the party. He shows Sarah his gift, a small framed photo he took of her. Unfortunately, the glass has cracked, so Paul promises to fix the problem and return it to Sarah.

Paul flees again when the Burgomaster’s men crash the party. Through various events, he ends up in the village we saw at the beginning of the film. He is turned away from the tavern as they bolt the doors after the sun goes down. Leaving there, he finds his way to the remains of Dracula’s castle. Upon learning his host is Dracula, Paul finds out he is trapped and is stranded in the secret chamber of Dracula’s coffin. 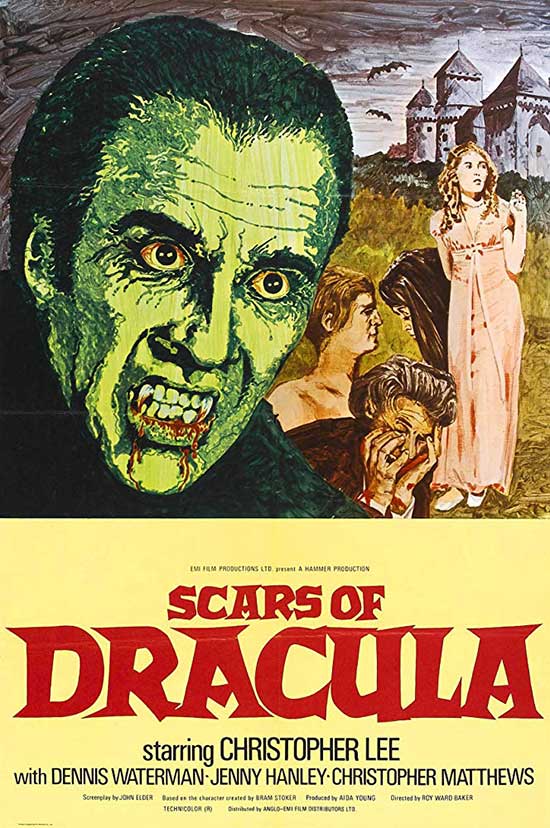 Simon and Sarah go looking for Paul. Somehow, they find themselves in the same village he visited. They too are ultimately turned away when it is clear they are looking for Paul. Off to the vampire’s castle they go. Though they are treated as important guests by Dracula, Klove, recognizing Sarah from the photo in Paul’s possession, warns them that her life is in danger. The couple runs back to the village only to be turned away again by the villagers. The village priest takes them in for the night.

Next day, Simon goes back to face Dracula. Even though he eventually finds his way into Dracula’s secret chamber, he fails to slay the monster and is rendered unconscious. Meanwhile, Dracula’s minion bats slay the priest. Sarah tries to run but ends up back at the castle. Can Simon free himself and save Sarah’s immortal soul?

If this film had rolled out in the early 60s, it would have been a point of controversy, most likely. Gruesome and bloody deaths paired with lingering views of cleavage would have been some spicy stuff. At the beginning of the 70s, Gothic horror felt creaky and outdated when you had real-life horrors on your evening news. On top of that, the film released the same year as “Taste the Blood of Dracula”, which had a stronger script. 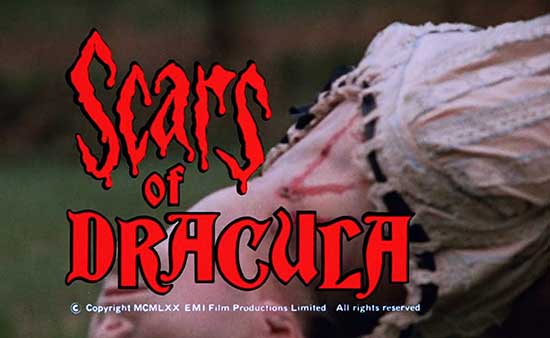 “Scars of Dracula” is entertaining but hollow feeling.

The script is a collection of plot points with no character arcs other than Klove, portrayed by former Doctor Who star Patrick Troughton, defying Dracula due to his attraction to Sarah, and Klove gets less screen time than the character deserves. Too many events repeat themselves with getting turned away from the tavern/village and characters failing a task as it would end the film too soon coming to mind instantly. The script highlights items that are base exploitation elements — violating traditionally “safe” characters such as killing children, visual representation of blood and gore, blatantly focusing on bosoms for titillation’s sake. While those elements made the initial Hammer Horror entries stand out, the same items seem to be the only reason for this film to exist given the weak characters and story.

You see more shots of woodland action than you see grand sets filled with sumptuous set decorations. In fact, you are limited to just a few primary sets that have the feeling that they were repurposed from earlier films. The matte paintings used look like paintings instead of looking like an organic background or expansion of a location. Even the costumes, usually a point of pride for previous Hammer Horror productions, look second-rate and ill-fitted. 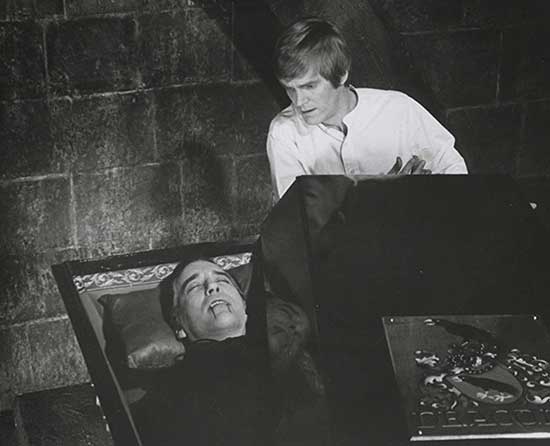 The film just feels like a cash grab or a vain attempt to maintain a sense of relevance. Around the late 60s and early 70s, the financial landscape for Hammer was changing as incentives for American film studios to underwrite and distribute British films started to die as the major studios continued to lose total market control after the breakup of major Hollywood studio monopolies. This meant Hammer no longer had a sure market; budgets were cut drastically, and “Scars” seems to have suffered as a result.

By no means is “Scars of Dracula” a bad movie. It provides all the basic elements you showed up for. Do not expect it to be an example of Hammer Horror at its Gothic best, and you can still enjoy Lee looking menacing in that special way he had.