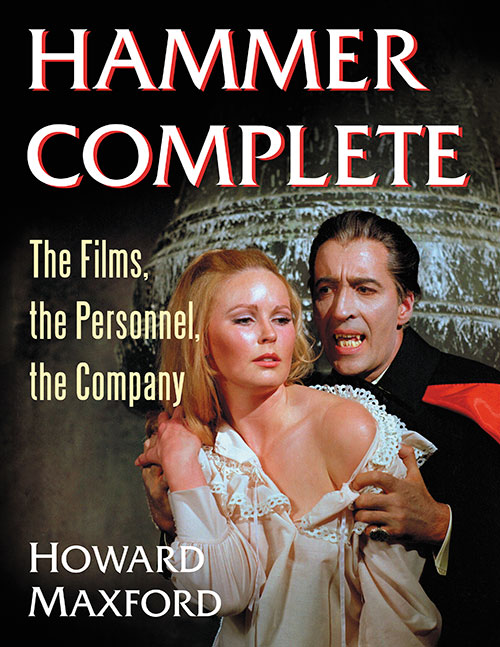 Howard Maxford is not a household name as far as authors are concerned, however in the realm of film books he has provided some truly informative and entertaining titles dedicated to Alfred Hitchcock, David Lean, and George Lucas. He is also responsible for The A – Z of Horror Films (1996) and The A – Z of Science Fiction and Fantasy Films (1998). His 1996 book, Hammer, House of Horror: Behind the Screams is a cleverly-titled work that runs just shy of 200 pages and provides a chronological history of Hammer Films from the studio’s start in November 1934 up to and including the 1970’s. That book was widely criticized at the time as being a likeable albeit insufficient history on the subject of Hammer. Obviously, Mr. Maxford agreed with that assessment as his new book, released in December 2018, is a tome called Hammer Complete: The Films, the Personnel, the Company and weighs in at 984 pages, just under six pounds, and measures 8.5” x 11”. It’s massive and can honestly be called a towering achievement. It’s also a personal account of a horror lover’s obsession and appreciation with a particular segment of the horror genre as evidenced by his introduction wherein he lovingly describes watching Dracula – Prince of Darkness (1966) on television, and even provides the exact time and date of the television airing. I love this fact, as I am the same way and a stickler for all things because screenings like this, for us when we were much younger, were an event to look forward to. Seeing these films changed us as people. I recall scanning the weekly TV Guide and circling the films that I wanted to watch in the pre-home video days, making note of how fast I would have to travel home from school to catch the beginning of a Laurel and Hardy comedy or how late I could stay up on a school night to watch a “network television premiere”.

Mr. Maxson also professes his love for Italian films, one of my favorite genres, and recalls a British magazine called Monster Mag, a publication that, despite my 38-year love of horror, I’ve never heard of before! This was a real treat. His intro is incredibly informative and exhaustive and a template for the style that follows in his writings. Illustrated with nearly 400 behind-the-scenes and on-set photos as well as images of rare movie posters (all images are in black and white), the book unfurls in an encyclopaedia format where some of the entries consist of a mere three or four paragraphs (see Darby, Jane), and others run over multiple pages (see Pithey, Wensley). Still others are even more in-depth, the most obvious being the section on the late Sir Christopher Lee who gets no less than six pages devoted to him. And why not? He is on the cover after all! While I have not seen all of Sir Christopher’s work, my introduction to him came at age five when I saw Horror Express (1972) on television which was made as the result of a wonderful bit of last-minute inspired moviemaking. Rumors concerning that film’s origins have swirled for years long before the availability of the Internet to the masses. The leftover train from Doctor Zhivago (1965), or Nicholas and Alexandra (1971), or (as contended by the producer) Pancho Villa (1972), the last of which is probably the case as it was also directed by Eugenio Martin and also starred (I kid you not) Telly Savalas, was supposedly the inspiration for this nifty horror outing that has remained a favorite of mine for over four decades. While not a Hammer film, Horror Express is fun and worth seeing.

What really stands out about this book, published by McFarland (mcfarlandbooks.com) besides its daunting size is the sheer number of entries in the form of personalities and film titles, to say nothing of the identification of thousands of film titles where the personalities are identified. Mr. Maxon provides much info that appears to be original, exclusive and fresh which is welcome when one considers that much of what has been written about the horror genre has been printed and rehashed many times over as well as from the standpoint of a fan’s point of view. Hammer Complete comes from a mature and critical standpoint, and belongs in every horror aficionado’s library, not just Hammer fans.