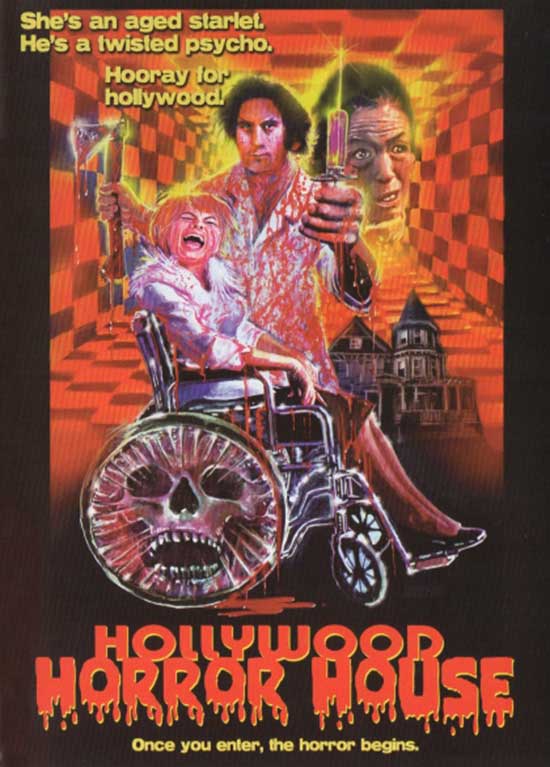 An aging actress living in her Hollywood mansion with a retinue of elderly servants employs a new, mentally disturbed, personal assistant who schemes to takeover the large estate.

Sometimes, it is fun to imagine classic Hollywood films reworked into horror films. Instead of Rosebud being a sled, what if Rosebud was a ghost that haunted Kane throughout his life. What if the Wicked Witch sent gut-munching zombies after Dorothy and Toto?

Imagine, if you will, “Sunset Boulevard” as a slasher flick!

That’s the vibe you get while watching 1970’s “Hollywood Horror House”, aka “Savage Intruder”.

A young man who had a troubled past with an alcoholic mother and some very freaky emotional/mental abuse takes out his internalized anger and angst on older women who enjoy their drink a bit too much. He chops and saws them into pieces and then dumps the parts where they can be found. 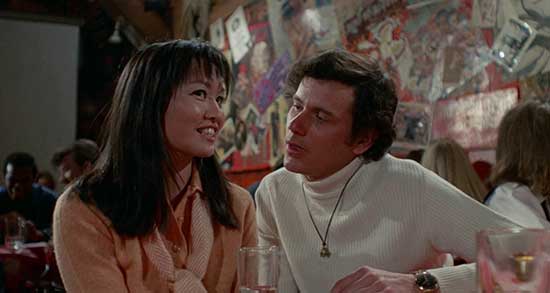 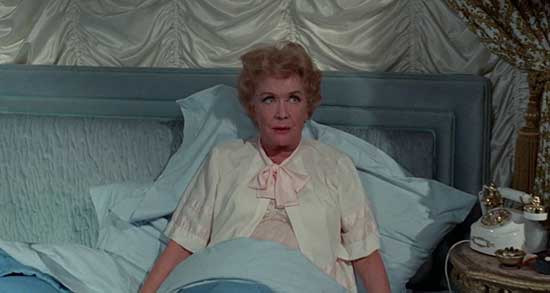 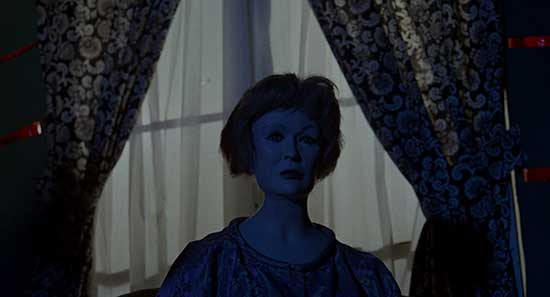 After watching him in action, the film cuts to a bus tour of Hollywood celebrity homes. It stops at the mansion of Katharine Packard, an old-school star who has faded like the famous Hollywood sign shown in the opening credits. Oddly enough, Katharine is played by Miriam Hopkins, who is also a faded old-school Hollywood star, in her final film appearance.

Lurking on the back bumper of the bus is our anti-hero, Vic Valance. He decides the mansion is remote enough, perhaps. Maybe he knows about Katharine’s historic benders. Perhaps his choice is random. The script is not clear. He hops off the bus.

Luckily for him, Katharine, during a drunken delusion, has recently broken her leg, and her staff expect an assistant from “the agency” to assist the old star as she recuperates. He worms his way into the job in spite of setting off red flags for both the head of staff and the primary housekeeper.

Settle in for a long build up as Vic woos both Katharine (obviously due to his severe mommy issues) and Greta, the young maid. He takes control away from Leslie, head of staff and handler of Katharine’s personal/financial affairs. He delights is frustrating Mildred, the old housekeeper who has served Katharine for decades. 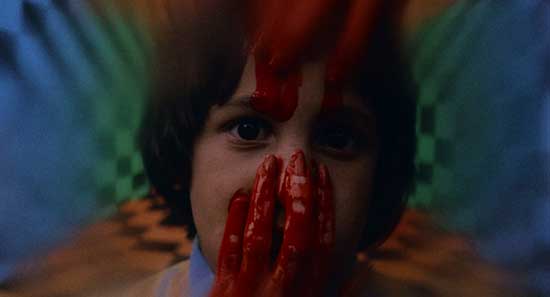 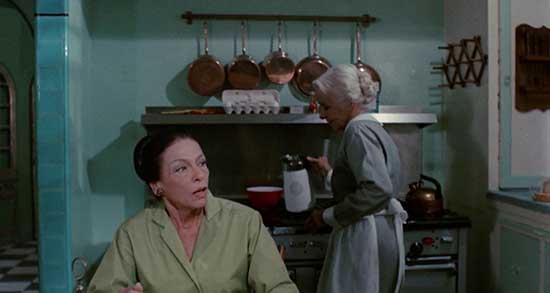 Once he learns that Greta is pregnant with his child and that she plans to expose his dual romance, Vic kills her. Then the real fun begins.

Most of the film plays out like a social/generational clash much like the one the country experienced in the late 60s and early 70s. Katharine and her staff represent the old guard with certain morals and convictions riddled with the decadence of the Hollywood life while Vic stands in for the far more liberal youth culture attempting to push the previous generation aside. Neither side is presented in the best light in this film, so don’t expect any clear depictions of who should win your sympathy; both have their faults, though only one side resorts to violence to advance its aims, however insane those aims may be.

Fans of classic cinema will have a wonderful time as the film is filled with other old-school actors other than Miriam Hopkins. Gale Sondergaard plays Leslie, Katharine’s right-hand assistant who handles her life, house, and finances. Florence Lake, with nearly two hundred film roles going back to 1929, is the feisty head housekeeper. Lester Matthews fills the role of Katharine’s agent and long-time friend. Joe Besser, a former member of The Three Stooges, plays the tour bus driver. Even Minta Durfee, former wife of Roscoe “Fatty” Arbuckle and a silent star herself, makes a short appearance. 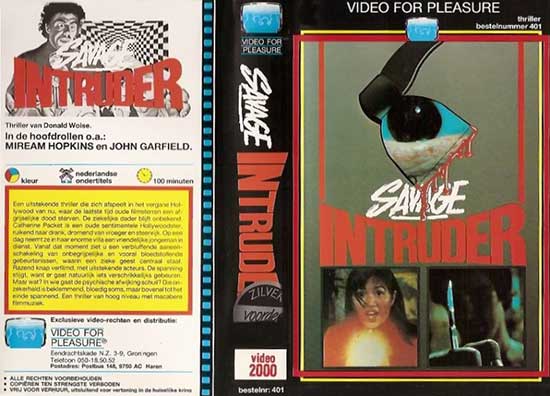 Miriam gives a varied performance. At one moment, she seems to be a caricature of aging film stars as she gives a campy spin to her drunken scenes, but then gives over to fairly believable hysterics as she is tormented and abused by the young, psychotic assistant who has upended her world.

John David Garfield, the only son of the famous actor John Garfield, is entertaining in his role of the emotionally and mentally disturbed Vic. One minute goofy, the next charming before becoming menacing. Since he is the ultimate focal point of the film, his shifting performance fits the role, but leaves the viewer wondering what his character’s real purpose is behind the drawn-out take over of the Packard household. 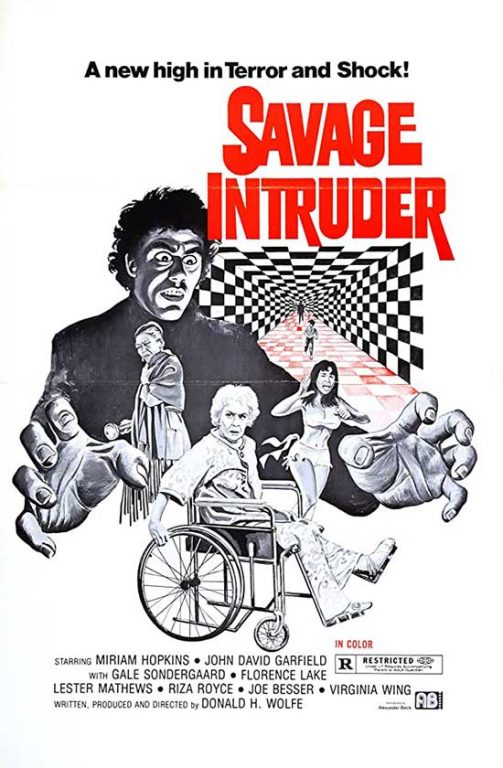 Gore fans will find a few interesting scenes, though most of the splashy stuff is confined to his psychedelic flashbacks of his tawdry, drunken mother. Take note of the scene of her hand being chopped off as it looks like a screen test for a similar scene in Dario Argento’s “Tenebrae” in 1982. 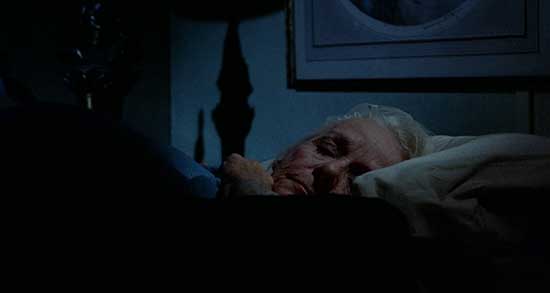 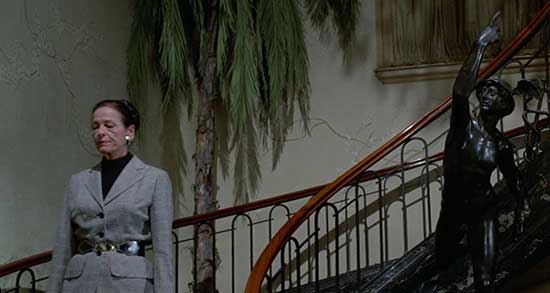 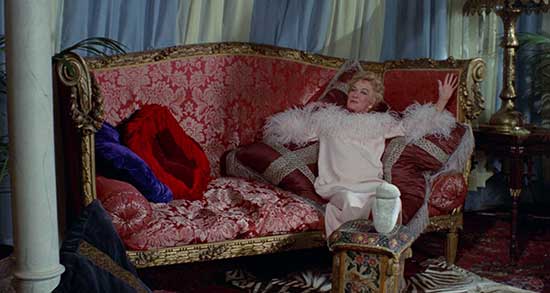 “Hollywood Horror House” is worth checking out if you dig late 60s/early 70s weirdness. It is entertaining, though a bit long for those used to action sequences every 8 minutes. For those who whine about older movies hurting their eyes, find the recent 4k release on Blu-ray. Just keep in mind that this film is not a non-stop splatter-fest, and you may find a worthwhile curiosity to add to your collection.

Film Review: Santo and Blue Demon Against the Monsters (1970)