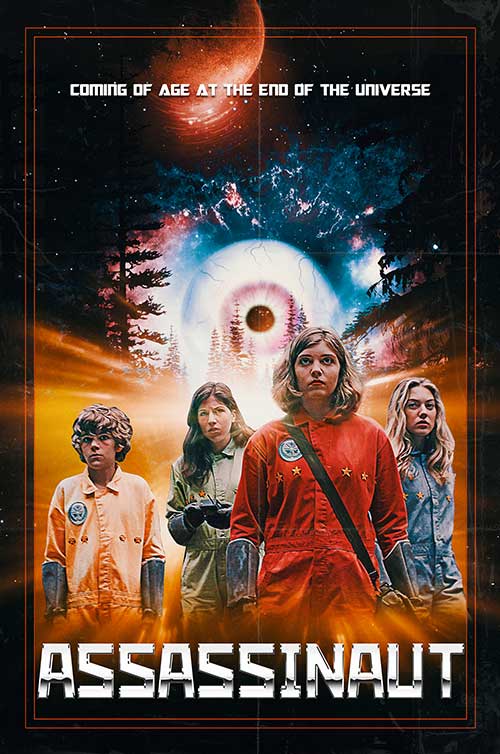 A group of kids in an alternate timeline where earth has interstellar enemies gets stuck on an alien planet with the President after an assassination attempt.

Assassinaut is the film you get when you throw the 1970’s Land of the Lost TV series, 1997’s The Jackal, and a superficial understanding of Stranger Things into a blender. FX specialist Drew Bolduc (The Taint 2011) writes and directs this ambling tale, and is presumably responsible for the all-too sparse moments of alien gore. As a whole, Assassinaut spends over an hour of its hour and twenty-three-minute runtime getting the cast to a planet that looks a lot like central Oregon, and plays an absolutely non-sensical story as seriously as if it were Casablanca.

What little plot there is involves a group of kids who are sent on a public relations stunt to the “President of Earth’s space station” (not kidding). The kids—Sara (Shannon Hutchinson of the upcoming Electric Jesus), Charlie (Jasmina Parent, Genèse 2018), Tom (Johnathan Newport, Permanent 2017), and Brooke (Yael Haskal, Everything is Wonderful 2018)—are then jettisoned to a nearby planet before the station is blown to space-bits, and must avoid assassins on a quest to find the injured president (played by 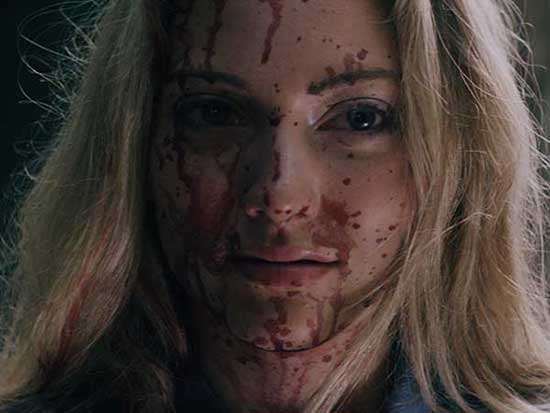 On paper, this sounds like a crazy sci-fi romp, but it plays out as anything but. Monsters are almost non-existent, and the plot is in no way resolved or motivated. In fact, it’s completely unintelligible. For example, the film opens with a peace treaty being signed between humanity and an alien race that will somehow cause the latter to bomb planet Earth–why would aliens need a treaty to do that? Combine such faulty logic with statements like “My leg’s broken; it’s already started to rot,” spoken by characters whose wounds would’ve barely stopped clotting, and you’ve got a very bad script.

Credit to Bolduc on the cinematography, though. Each shot is vibrant and expansive, though huge gaps in storytelling make budgetary restrictions the main center of attention on more than one occasion. For example, the entire first half of the movie consists of the kids prepping for their trip into space, and it’s not even shown. In fact, it’s not even clear that the trip has happened until a character says it out loud. This is partially because the interior locations leave a lot to be desired. For example, the President of Earth’s space station appears to be a church basement, and there’s not even room for the characters to interact. The special effects, as rare as they are, are nicely rendered practical effects.

The acting on display is weak, although it’s got to be hard to bring life to a script where emotions are unmotivated and there are countless… unnatural… pauses… during… conversations. The characters are either cookie-cutter stereotypes such as the whiny motormouth or smarty pants, or have no definable personality (read: the main kid Sarah). Somehow, we’re somehow supposed to root for them anyway. This proves impossible, and when they’re gruesomely dispatched one-by-one, no tears are shed.

Taken as a whole, it seems that Bolduc wanted to inject a bit of Stranger Things’ coming of age drama into a political espionage, science fiction backdrop. However, it lacks the understanding of interpersonal interactions and nostalgia-nods that make ST a hit. Instead, it plays out like an even less-followable version of 2011’s Hannah, with bare-bones acting and a plot that moves forward without reason. 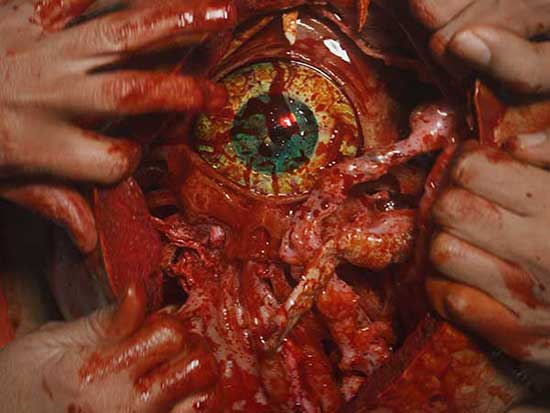 Is it worth watching? That depends on your ability to sit through twenty minutes worth of film stretched into an hour and a half. The graphics are nasty in a good way, but the poor dialogue, acting, and lack of alien monsters are nasty in a bad way. Why the zany plot was played seriously is beyond me, and it doesn’t pay off, which is a shame. Zany paired with Bolduc’s effect’s prowess could make for a potent pairing, but Assassinaut is far from that.

Assassinaut (2019) is now on blu ray per Epic Pictures