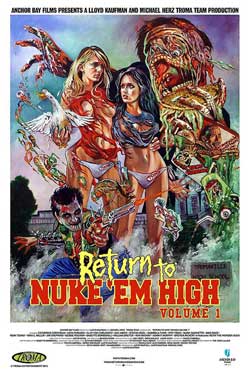 Return to the Class of Nuke ‘Em High follows a young couple that are up against the school glee club. Unfortunately, the glee club has mutated into a gang called The Cretins. When the other students begin to undergo mutations, our couple must solve the mystery and save Tromaville High School.

By the time the 1980s were reaching the back nine, the shine was starting to wear off the slasher template for us Getz children.  During the usual scavenging of the $2.00 video bargain shelf on a shopping excursion (we’d find “Blue Velvet” there three years later), I came across “The Toxic Avenger.”  The moment the sibs and yours truly laid eyes upon the jaunty box art, rendering Toxie in all his deformed glory, we had to have it. 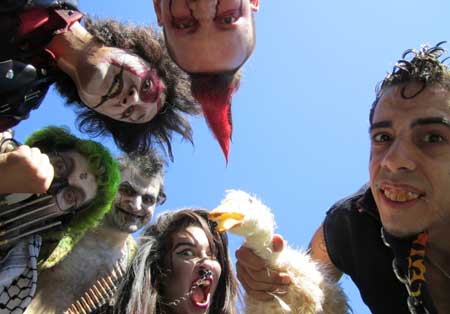 Since then, I’ve seen more Troma films than I care to admit to anyone outside of the psychiatrist I’ll inevitably require one day because of all the Troma films.  For forty years, partners Lloyd Kaufman and Michael Herz have built a scrappy empire upon raunchy sex, tasteless humor and cheap gore displays. Like that grade school pal who delighted in relating “Little Johnny” jokes, these gentlemen want nothing more than to disgust and delight you.  It’s their raison de’être.

Kaufman is back at the helm for the first time since 2006’s “Poultrygeist: Night of the Chicken Dead,” which was every bit as wonderful as the title suggests.  Accompanied by co-writers Derek Dressler (Disney’s animated “Kick Buttowski: Suburban Daredevil”) and Travis Campbell (the talented film maker behind “Slaughter Daughter,” who also edited) the old salt has indeed delivered something special with “Return to Nuke ‘Em High Vol. 1.”  More an updated remake of the original in the “Evil Dead 2” vein than a true sequel, this fourth installment of the cult series offers zero pretentions as it delivers exactly what’s expected of a gooey throwback.  Whether or not that’s a good thing in the eyes of a particular viewer is a completely different and subjective matter. 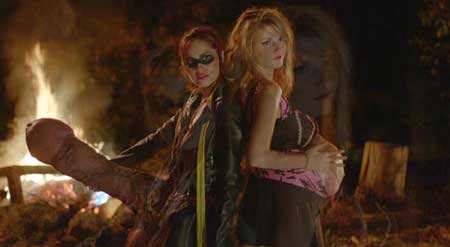 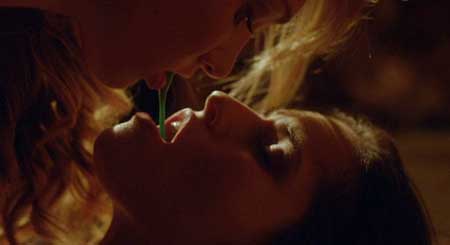 An entertaining montage of basically just the deaths and breast shots from the first three “Nuke ‘Em High” movies accompanies the voice-over narration of Stan Lee (I know, right?), who swiftly summarizes the previous events leading to present.  Wasting no time, we are immersed in a grimy custodial closet as two teens go at it like. . . well, teens, unaware of the toxic goo (the same day-glo green slime we know and love) dripping from the pipes above them.  In just these initial five minutes, we bear witness to full female nudity and not one, but two disembodied penises.  I don’t have a clue where the second schlong even originated from, but the janitor’s reaction to the aftermath is priceless. 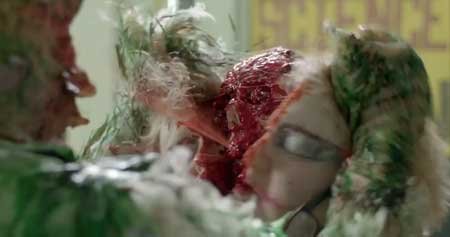 The nuclear power plant that loomed over Troma High for decades has now been bulldozed due to the high rate of skin-melting fatalities, and in its place stands Tromorganic Foodstuffs.  Unfortunately, public health is even less of an issue to the new company, which sells its radiated beef to the school cafeteria.  This results in a disastrous Taco Tuesday, as a student we’re informed is moments away from curing all forms of cancer eats his fill of the tainted beef and disintegrates in front of his fellow classmates.  Also affected is the Glee Club (one of many stale gags), who transform during an assembly into a horde of harmonizing mutants.  In a nod to the original, the subhumanoids have been dismissed in favor of the “Mad Max” inspired Cretins. 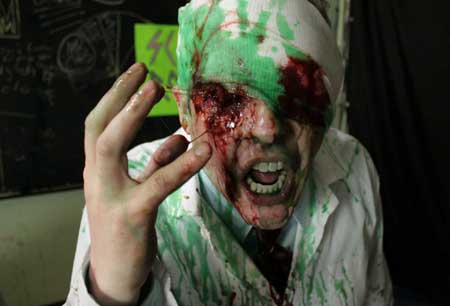 At the heart of ensuing mayhem is the budding and occasionally charming romance between tough activist blogger Chrissy (Asta Paredes) and pampered rich girl Lauren (Catherine Corcoran), who begin as clothes-tearing, cat-fighting adversaries.  This changes once Lauren loses her duck Kevin (her “driving and crying” scene after discovering the empty cage is a riot) and is assaulted with the pet by the Cretins, resulting in the film’s silliest sequence as she runs around Tromaville with the waterfowl shoved halfway down her throat. 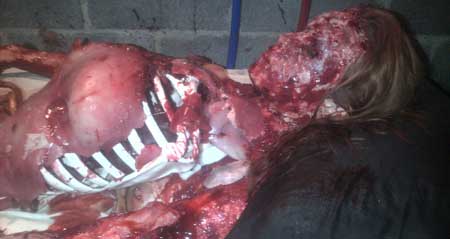 Quite possibly the film’s shrewdest move is casting two genuinely gifted comedic actresses in the leads.  Paredes and Corcoran, both bit players prior to this, exude a natural chemistry that is milked for all it’s worth in Kaufman’s pervy hands.  The lengthy (I hardly noticed) sex sequence, even with a brief appearance from the ooze, rivals those of “Mulholland Drive” and “Black Swan.”  Oh yes, it’s that hot.  You can’t take your eyes off these two, and hopefully this gig leads to many more for them.

The chaotic and loose nature of the plot is a huge asset to the relentless shenanigans, as every possible shred of offensive material is thoroughly explored and bumped up an extra notch or two.  From school tragedy humor (“Three days without a shooting!”) to Jerry Sandusky jokes that completely tank, the lack of couth is at times jaw-dropping.  A few surprise cameos (Lemmy from Motörhead, the store owners of “Oddities”) add to the festive atmosphere, but what pays the rent are the low-tech splatter effects, and “Vol. 1” certainly delivers in that respect as well.  Though focusing a bit more attention on the goofy gags than perhaps necessary, there is no denying the endeavor its gross-out props once Chrissy and Lauren arrive at the Cretins’ den, sporting mutations that must be seen to be believed. 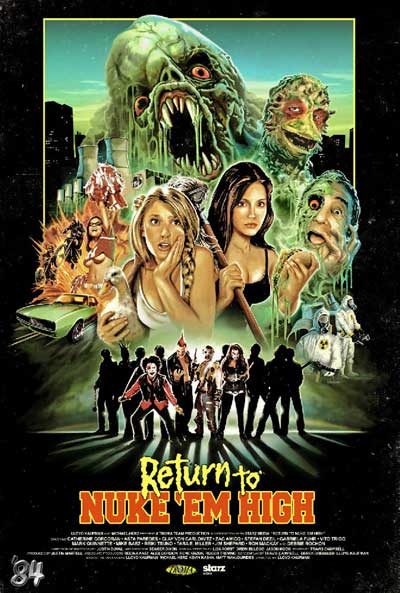 Sounds great, but does it suffer from any script issues, continuity errors, weak performances and/or questionable production values, you may ask?  Does a bear drop his morning deuce in the woods?  However, more so than nearly any other previous Troma offering, “Vol. 1” achieves a level of meta lunacy that would leave one disappointed if every cinematic sin weren’t accounted for.  Like checking items off a list, it hits them all.  Hard.

The abrupt cliffhanger ending is excusable, given that it’s an awkward yet earnest homage to the “Kill Bill” series.  Hell, this is a Troma flick, friends.  Either you forgave it from the beginning or you never will.  “Return to Nuke ‘Em High Vol. 1” is a love letter to the twisted souls who have kept Team Troma afloat through the decades, but it professes another deep affection as well.  After all these years, Kaufman’s adoring ringmaster embrace still envelops every single frame of his sleazy side show universe.  That warms the heart of this jaded critic and wannabe schlockmeister.

Making movies can be loads of fun.  For testament to that fact, look no further.  Bravo.  Bring on “Vol. 2.”