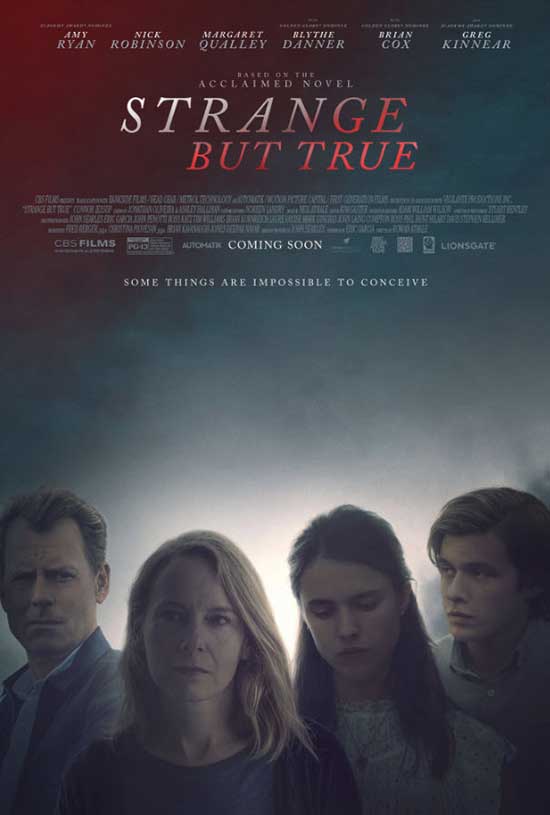 A woman surprises the family of her deceased boyfriend by telling them she’s pregnant with his child.

Ever watch a movie and, in your head, you envision the movie as being one thing, but, after watching it for a while, you realize the film is something you did not expect – and you really dig it? “Strange But True” did that.

If you expect supernatural or similar types of occurrences given the premise, you might want to step back your expectations. This is a horror movie that focuses more on the casual horrors of life itself. The only things that go bump in the night are us and those in our lives, and things can get pretty effing scary.

Take a happy family. Loving mother, successful dad, and two handsome sons. Add a doting girlfriend for the younger son. Mix in death and tragedy. You have a horror story there. Lives are lost; others are shattered, and nothing is ever the same again.

Five years after the death of the younger son, his girlfriend arrives, pregnant, and claims the dead son is the father. She swears Ronnie was her only sexual partner. One day, she realized she was pregnant despite living alone on the property of an elderly couple. It must be Ronnie’s no matter how impossible it may sound, she reasons.

The family does not take this well, but a thread of doubt keeps them from dismissing the situation utterly. Secrets, lies, and half-truths spring up, and the horror of life looms over them again. But there is an even darker fact that sets in motion a new series of tragic events.

“Strange But True” covers material that you would commonly find on the Lifetime Channel; except on Lifetime, they would ONLY deal with the death of a child or the unusual pregnancy or the dark truth behind everything. This film hits you with ALL OF IT, and, even if in hindsight the plot is a bit convoluted, the initial response can be rather powerful.

The one thing the film gets right (I assume the novel on which it is based does the same) is weaving together the characters, their individual stories, and the plot elements that push the story along. The viewer gets bounced from the past to the present as the film peels back the story bit by bit. Each scene opens the characters, changing the viewer’s perception as the characters shift from cold to sympathetic, or from pleasant to calculating. Since care is given to the writing and acting, the film moves at a deliberate pace, doling out just enough information to hook into the next scene, leading the viewer down a dark hole of humanity. 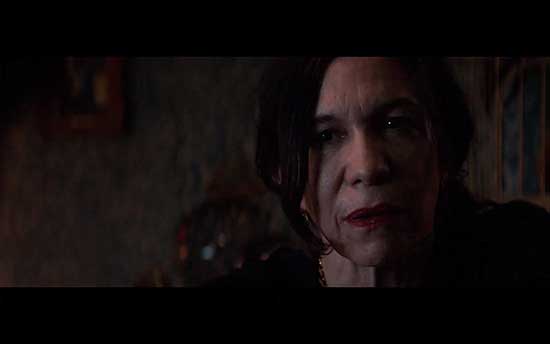 As I have said before, this isn’t traditional horror. The horror here are the parts of those around us that are hidden from our view. We put trust in loved ones to treat us with the same care and respect they afford themselves. What if those we trust do horrible things to us without our knowledge? The horror can go unchecked.

Another interesting element in “Strange But True” is the camera work. The camera rarely brings attention to itself throughout the entire film. A lot of big films will have the camera bouncing or turning tricks that would make a call girl envious. In this film, the camera either sits silently recording the events, or it sidesteps in like an eavesdropper.

Of all the few complaints I could level against this film, the worst would be that certain elements of the final 15 minutes of the movie feel forced to produce the desired resolution. Again, that feeling that you have been manipulated (and you have been) only came up AFTER watching the film. If a film can be compelling in its storytelling, a few purposeful rearrangements are worth dealing with.

As stated, “Strange But True” is not aimed at violence-and-blood fans. That being said, there is one scene in which a person suffers a massive injury that should take the breath away from most viewers who don’t eat stringy lasagna while watching real autopsy footage. The scene is virtually bloodless, but just thinking about it can make a person cringe. (Actually, I’d like to see a 10-hour loop of the “accident” on YouTube, just for giggles.) 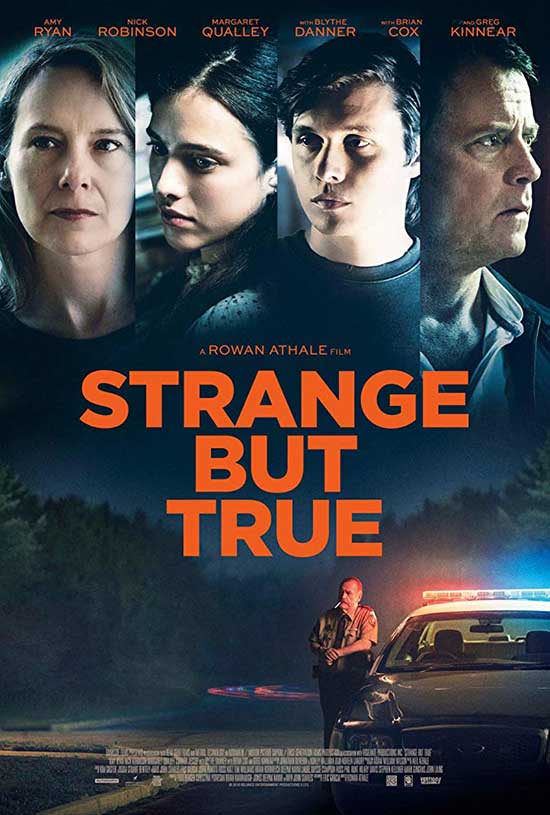 “Strange But True” is a good film that may be considered “horror” because of the premise. To be honest, I find the real-life horrors of this movie more frightening than the idea of Cthulhu’s visage slowly manifesting in the blue sky. Some may find it lacking, depending on what you are looking for in a film, but “Strange” is a far better film than was expected no matter what genre it truly belongs to. Worth taking a risk of a rental, if nothing else.