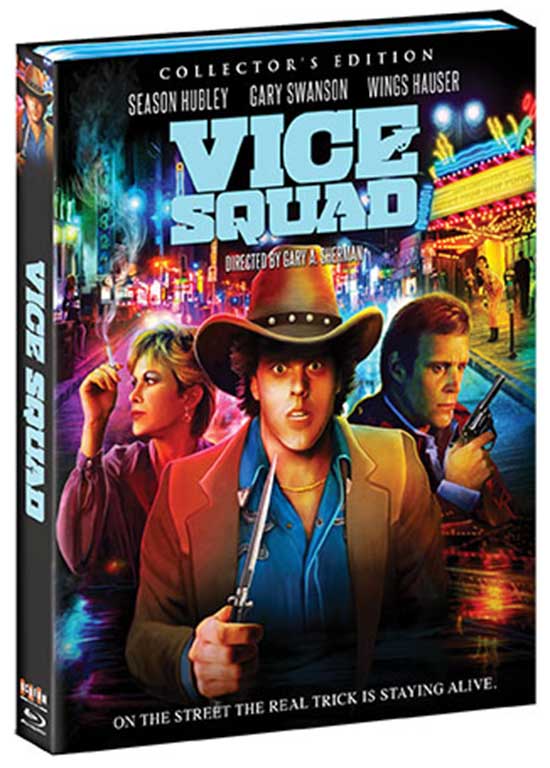 A Los Angeles businesswoman, known only by her street name of Princess, turns to prostitution to support herself and her young daughter when she’s forced by Detective Tom Walsh and his vice squad to help them arrest a brutal pimp named Ramrod for the murder of a prostitute named Ginger. But when Ramrod learns that he was set up, he escapes from police custody and begins a long night of tracking down Princess while Walsh and his vice squad are always one step behind him.

Wow, the very mention of the movie “Vice Squad” takes me back a bit. Released in 1982, this movie bears the distinct inclusion of 1 actor, Wings Hauser, in the role of bad guy/pimp, Ramrod. At the time, this actor was very convincing in his ability to play the nasty antagonist of film, almost to the point of typecasting him.

Though if my memory serves me correctly, this was also a time where having an ass hole antagonist that people love to hate was pretty much a trend that worked in the 80’s. Actor John Vernon in “Savage Streets“, Willem Dafoe in “Roadhouse 66” (1984) and some others that don’t come to mind, serve as a few like examples of typical film setup. 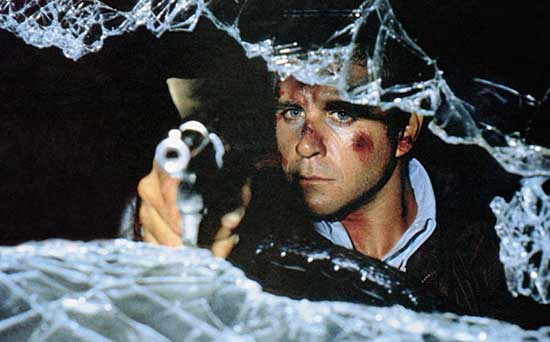 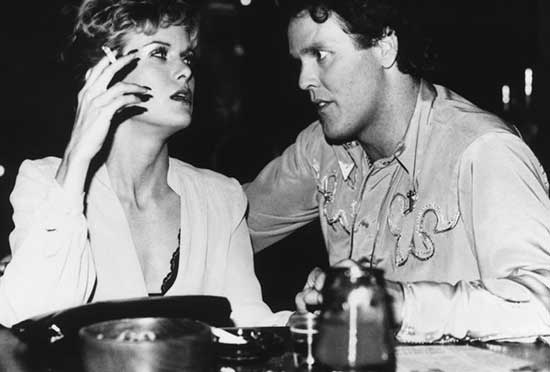 Now, 2019, we are given a treat per the Shout Factory team by giving current generations a polished up version of this police style street film named “Vice Squad”. These style of films were the trend in those days often emulating a more sophisticated version of what was popular on television. On year prior we had films like “Fort Apache the Bronx”, “Savage Streets” and of course the 2 death wish films (2 and 3) making a return to screen. I suppose you could go 1 step further with films like “Escape from New York” taking a more apocalyptic future approach to it all. 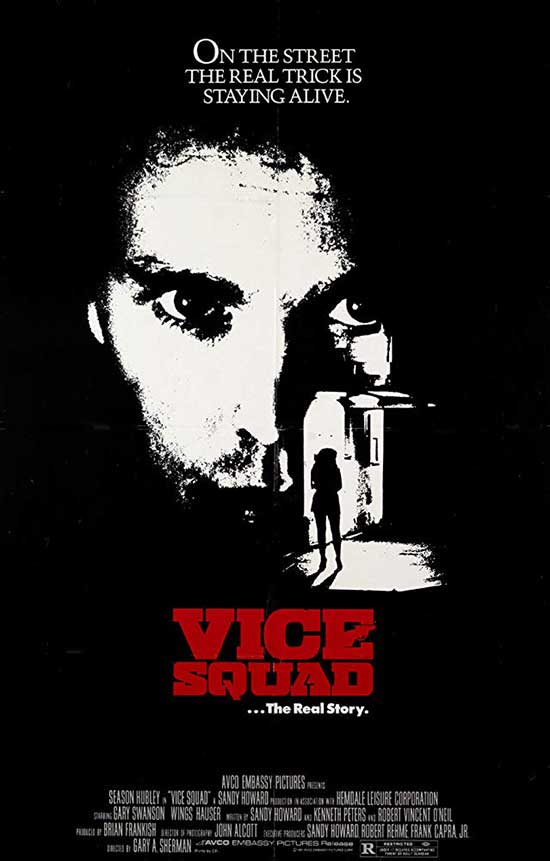 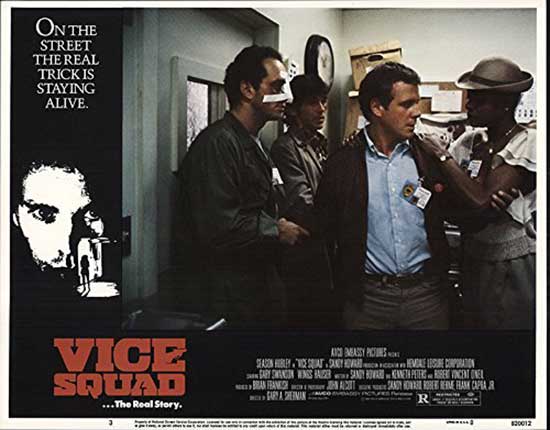 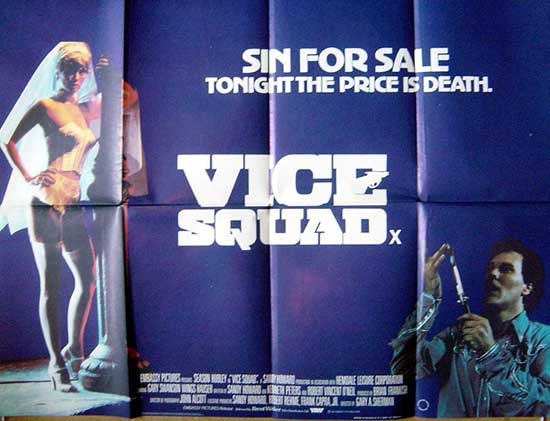 Ramrod, the meanest pimp in L.A, appears to have a problem with abusing his staff, more specifically his collection of call girls. Tough, mean as a pit bull, and half out of his mind, Ramrod runs the streets with an iron fist making claim to those who work for him. A bad reputation isn’t enough, as he also appears to be making more enemies than friends. Pimps, business men, police…it’s all fair game.

Season Hubley plays the call girl Princess, also a key character to “Vice Squad”. While quite beautiful and sometimes resembling an Olivia Newton John (let’s get physical) style, I never really felt she looked prostitute enough to be believable in her role. I suppose that should be taken as compliment, however Princess even donning her slut-makeup still struck me more as a high class Nordstorm’s counter girl than a hard-life prostitute. 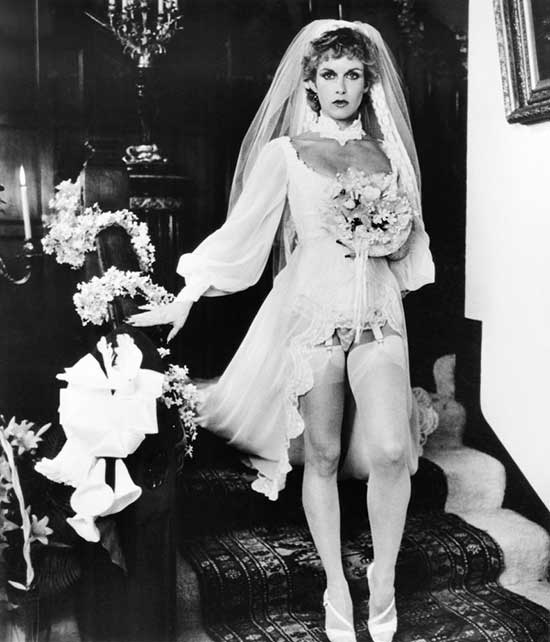 In any case, Princess is key to “setting up” Ramrod with local law enforcement, after her best friend Ginger is literally beaten to death. This sets into motion the key conflict of the film which has local officers hot on the tail to take down and imprison Ramrod (if not also inflicting payback for his long string of abuse, violence, and disregard for the police force).

The film plays out like most of this genre, the antagonist sets the stage for vengeance from those he wronged, while seemingly still able to allude the police force (despite him being one guy and having the whole squad after him). Fights, car chases, violence, and insanity build in this perfectly suited police vs bad guy action film. Gary Swanson as police chief Tom Walsh gives a great protagonist performance as he chases down Ramrod. 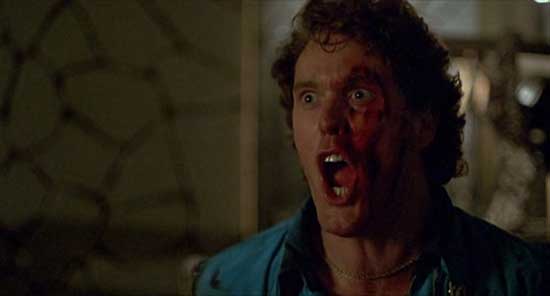 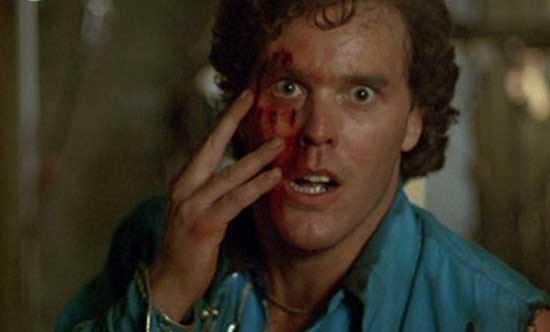 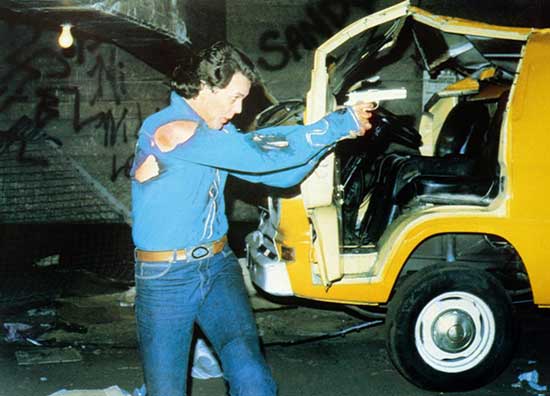 “Vice Squad” was one of the nastier ones that really put Wings on the map as a formidable villain for his time.

Oh, ya, in case you were wondering? Yes, that is MTV’s Nina Blackwood playing the role of prostitute Ginger. I had to do a double-back on that one, as I couldn’t place the face. 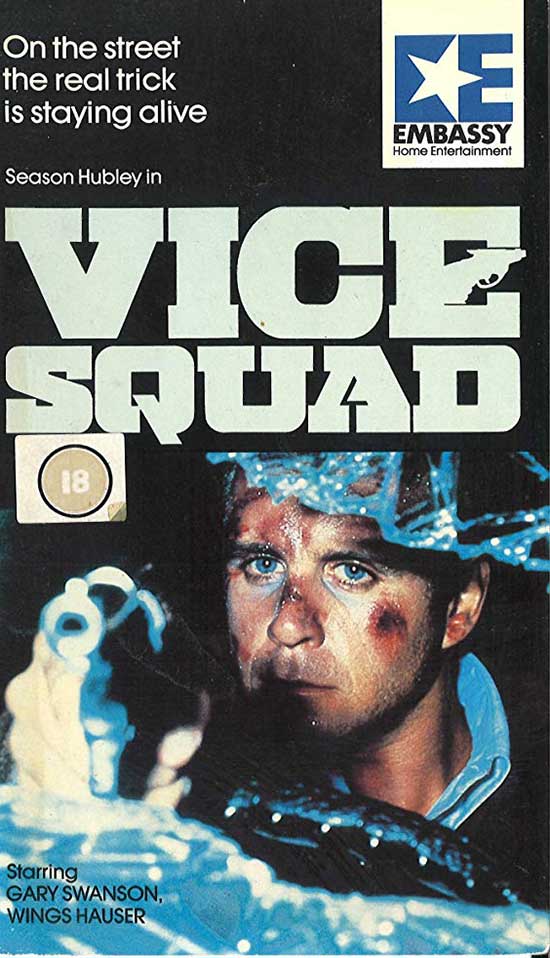 “Vice Squad” is a cool film worth viewing. It’s been decades since I’ve sat down with this one and don’t regret it for a second. A strong amount of action and revenge drama make for a great play against a real nut bag. Shout Factory recognized this one was long over due for a facelift and so viewers can see it now better than ever before the VHS tape era

Vice Squad is now available on bluray per Shout Factory