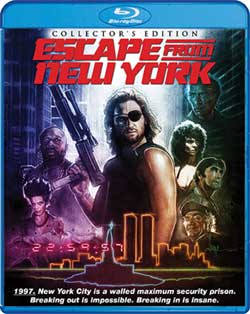 “The year is 1997. New York City has been turned into a maximum security prison colony, when the American crime rate grows high. New York City is surrounded by a wall and the bridge is mined making sure no convict escapes from New York. Snake Plissken, a one-eyed former soldier turned bank robber arrives at New York after being sentenced to life imprisonment in New York City. Bob Hauk, police commissioner who runs the New York penal colony gives Snake a job for his freedom. Snake is sent into New York to find and rescue the President of the United States who is trapped in New York, when a terrorist hijacked Air Force One and crashed it in New York. Not only must Snake rescue the President, he must also retrieve a cassette containing vital information in the President’s possession. Hauk has Snake implanted with a bomb which is programmed to detonate in 22 hours, which will kill Snake if he fails the mission, and Hauk will have the bomb disarmed if Snake succeeds. Entering New York and 22 hours before the bomb kills him, Snake sets out to rescue the President who is being held hostage by a ruthless warlord known as The Duke of New York. Can Snake rescue the President and retrieve the cassette before the 22 hours are up? And will Snake escape from New York?” (courtesy IMDB)

Born in 1948, John Carpenter was one of the new generation of young directors to come out of the same film school – the University of Southern California School of Cinematic Arts – during the early seventies. Though his first feature Dark Star (1974) was well received at film festivals, it was years before it gained any sort of wide distribution, and he didn’t become generally known to the film-going public until the release of Halloween (1978). Carpenter had to wait a while before getting a fully professional directorial assignment, and passed the time writing screenplays. The one script that was eventually made, The Eyes Of Laura Mars (1978), was much changed from his original conception and, to this day, he still doesn’t like it. He was then allowed to direct a modest thriller from his own screenplay based on the John Wayne classic western Rio Bravo (1959), Assault On Precinct 13 (1976), which was enthusiastically received at the London Film Festival. Producer Irwin Yablans was in the audience, and this eventually led to the making of Halloween.

The rest is history – quite big history actually – for many years Halloween held the record for the biggest profit made on the smallest outlay, costing around US$325,000 to make and earning almost US$50 million, about 154 times its original budget. With this success, Carpenter had reached the big time but, with his next two films, it seems like he didn’t know what to do with the bigger budgets that were given to him. The Fog (1979) is an interesting little supernatural thriller about the spectral crew of a ghost-ship that returns to wreak vengeance on the tiny Californian port whose ancestors were responsible for their deaths a century before. His next film, Escape From New York (1981), is undoubtedly science fiction, supposedly Carpenter’s favourite genre, and the one he was brought up on. 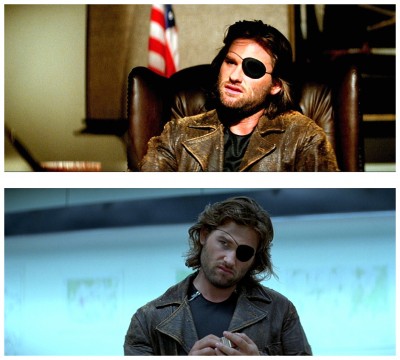 In conjunction with films like Mad Max II The Road Warrior (1981) and The Terminator (1984), Escape From New York helped establish a more pessimistic vision of the future in the early eighties. Originally written during the tail-end of the Nixon administration, the screenplay offers a forecast of the decade’s rising crime rate and a strong attitude toward the duplicity and secrecy of governments. In the far-flung future year of 1997 (sixteen years after the film was made), Manhattan Island has become a maximum security prison, containing a colony of criminals and outcasts free to do what they like inside, but locked away from the outside world by massive barriers, fifty-foot-high walls and mined bridges (surely the bridges would have been destroyed by the government…if Carpenter didn’t need to utilise one in his escape plot, that is. But I digress).

Terrorists have hijacked Air Force One, the plane belonging to the President of the United States (Donald Pleasance), and succeed in crashing the jet into one of the city’s derelict skyscrapers. The President survives only to wind up captured by a gang of prisoners led by the ruthless Duke of New York (Isaac Hayes). War hero veteran-turned-thief Snake Plissken (Kurt Russell) is sent in to the dangerous city to rescue the President by police chief Bob Hauk (Lee Van Cleef), who informs Snake that if he doesn’t get out within twenty-two hours, tiny pellets injected into his neck will explode and kill him. “It’s the survival of the human race, Plissken, something you don’t give a shit about.” 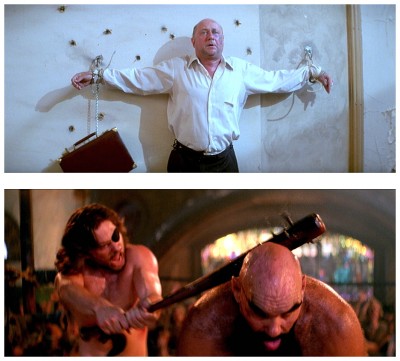 Once inside, Plissken enlists the aid of several prisoners, including Cabbie (Ernest Borgnine), Brain (Harry Dean Stanton) and Maggie (Adrienne Barbeau). Together they find out that the President is being held hostage by the Duke, who intends on using his high-value hostage as a ticket to freedom. Carpenter and co-writer Nick Castle‘s bleak vision of 1997 is a dystopia of zero tolerance (escapees are blown up within the first few minutes) where any undesirables shipped off to the prison have an option for self-termination if requested. The penal system has been abandoned in favour of an anarchistic free-market structure that sees the rise of everyone from crime lords to oil producers to cannibals.

The inventive screenplay also leads to some unforgettable action sequences with Carpenter’s memorable score speeding the anarchy along at a rhythmic rate. The film has a great cast (also with Season Hubley, Charles Cyphers and Tom Atkins) and an interesting premise, but Carpenter ignores the political possibilities of his subject – see Stephanie Rothman‘s Terminal Island (1973) for a better example – and opts for the comic-book route, giving us trite story points (many taken from westerns) and unreal cliched characters. The one original moment is probably when Snake discovers an underground theatre with male performers in drag and a small group of musicians.

Like Assault On Precinct 13, Escape From New York is essentially a western in a modern setting. In fact, just because Lee Van Cleef was in the cast, Carpenter decided to have Kurt Russell impersonate Clint Eastwood throughout the film – his dry monotone voice can certainly get on one’s nerves. Resisting the urge to use older studio-suggested stars like Steve McQueen or Charles Bronson, Carpenter insisted on casting Russell, with whom he had worked on the hugely popular made-for-television production Elvis The Movie (1979). Whereas a big-budget action movie starring a former Disney child star would be questionable today, the duo of Carpenter and Russell made it work. 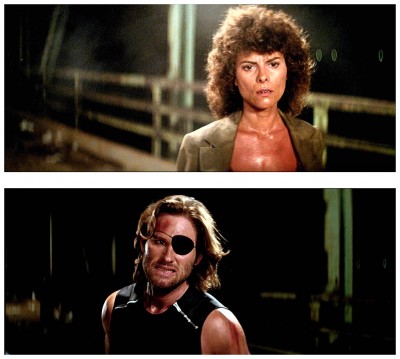 Carpenter devotees will no doubt enjoy the action sequences, flashy outfits and catchy electronica soundtrack (possibly Carpenter’s best), but the film is surprisingly downbeat. Intentional mindless escapism and tremendously good fun, it was ultimately a disappointment for some because, by the early eighties, audiences were expecting remarkable things with each new John Carpenter production. The film is admittedly atmospheric as Snake weaves his way through the exotically tough low-life society inside this sanctuary of free enterprise, but it gets rather episodic with little narrative thrust and slightly lackluster climaxes. Furthermore, at no point does Carpenter make creative use of his New York locales, mainly because most of the exteriors were filmed not in New York but St. Louis in Missouri – it could have been called Escape From Cleveland and no-one would be any the wiser – and it’s with this geographic thought in mind I’ll politely invite you to please join me next week to have your innocence violated beyond description again while I force you to submit to the horrors of…Horror News! Toodles!