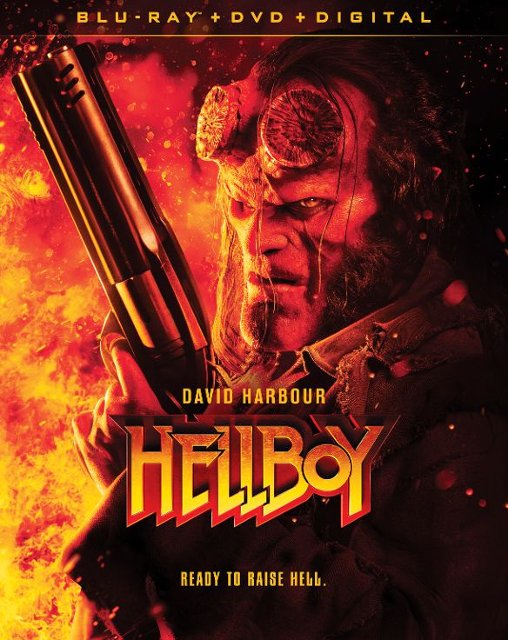 Based on the graphic novels by Mike Mignola, Hellboy, caught between the worlds of the supernatural and human, battles an ancient sorceress bent on revenge.

Hellboy, an unexpected success with fans, has definitely seen its share of franchise movement. Of course the original 2 movies featuring Ron Perlman, Selma Blair, and Doug Jones were fan favorites adding further impact to comic-to-cinema realizations. However, years later, we find the Hellboy universe getting a total reboot from its 2004 debut (presented yet again for 2019 audiences).

While reboots are becoming often too common these days, it is a welcome transition when the franchise is treated with respect and delivered with pizzazz. “Hellboy (2019)” is one such film that upon repackaging the story a bit, still comes across pretty damn impressive. 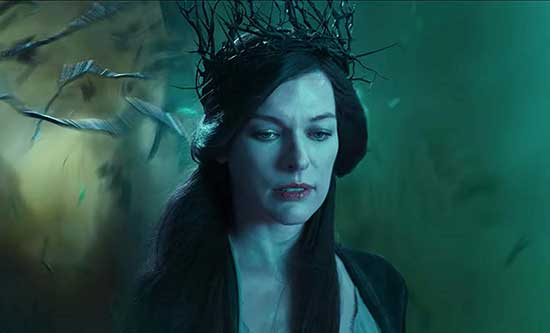 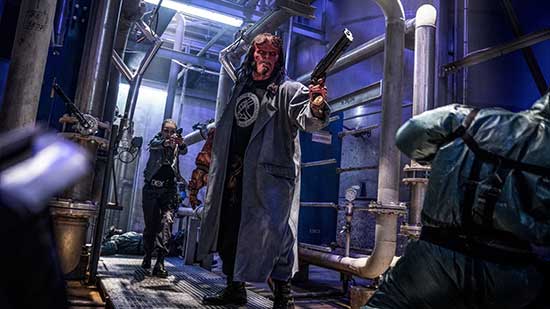 To step back, I ended up seeing Hellboy in theatres this year only because “Avengers Endgame” premier was completely sold out. Hellboy appeared to be an interesting alternative, so instead of feeling bad about sold-out tickets, I gave it a go. It was only after seeing this 2 hour movie play out, that I realized it was way more bad-ass of a movie, than originally anticipated. So I made a point that once it came out digitally, I would properly review it on second pass. (…..And so that brings us here!) 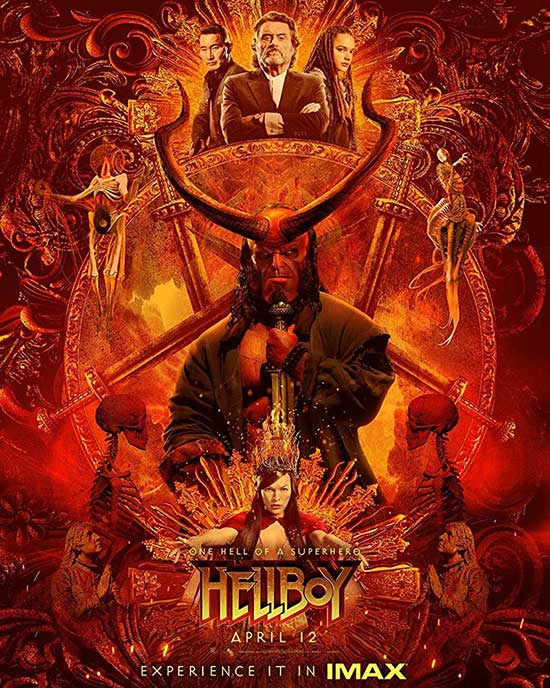 David Harbour is our new Hellboy (aka: Anung Un Rama) for the 2019 reboot. Despite me being a fan of Ron’s version, I found myself really pleased with David’s performance. David Harbour felt right in the part, thus carrying the Hellboy torch with style and conviction.

Now of course, it is a reboot, so some story arcs are revisited, though with former Hellboy star Selma Blair dealing with medical issues of her own, it was probably a good decision to re-brand the story and the players.

Hellboy is the brainchild of original creator Mike Mignola and the Dark Horse Comics team. Now on a re-make, we are joined yet again with the supernatural odd world of Hellboy and his conquests. To bring the story to light, it centers on the witch Vivian Nimue, aka The Blood Queen played by actress Milla Jovovich. After being defeated by King Arthur and Merlin back in A.D, Nimue was dismembered with her pieces being split into boxes to be separated and guarded.

Now in present day, dark forces plot to revive her for the coming of the apocalypse. Hellboy unaware of this is assigned to defeat Giants, Werewolves and even Baba Yaga herself before being revealed that he is prophesied to play a major part in the end of the world.

Hellboy is reunited with associates and friends from the past as the journey and end game grows ever closer, his mission of course to locate and prevent the queen from fulfilling her destiny. Ian McShane plays the role of Trevor Bruttenholm, Hellboy’s father, with Sasha Lane as Alice Monaghan, a powerful psychic.

Stephen Graham (and Douglas Tait) plays the part of the fairy boar, Gruagach, whom becomes Nimue’s assistant and strong arm recovering her pieces. 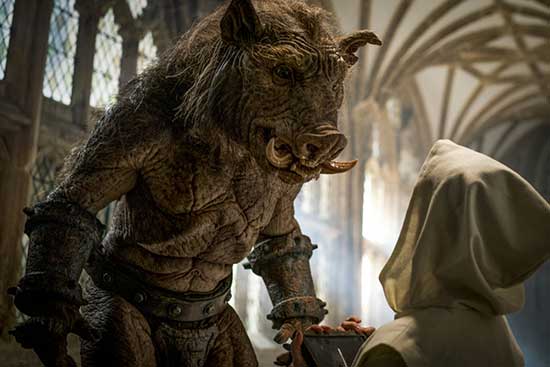 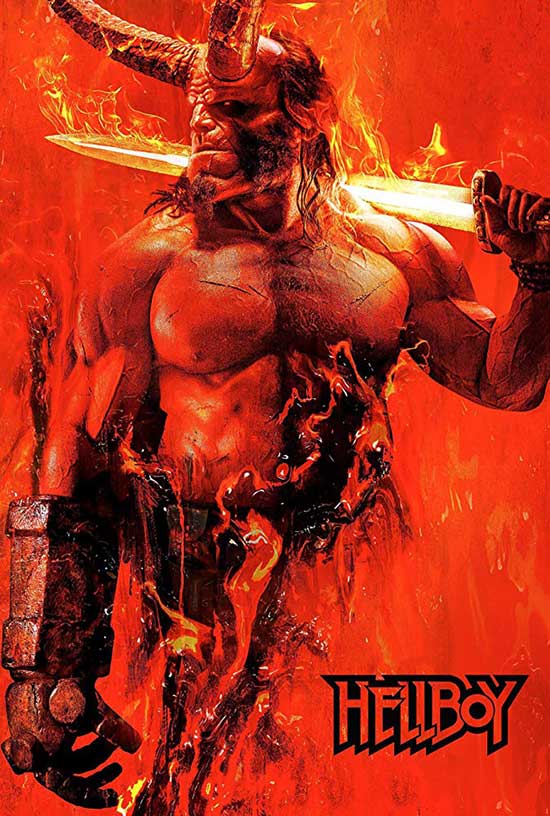 The film moves from one oddity to the next laying down a fantastical-and-often-gory showcase of creatures, magic and mayhem while doing it all in a enjoying way. Now if the images seen here aren’t enough, then I can tell you the resurrected demons featured here might just be.

The character Hellboy and his universe is one presented quite darker than many of the Marvel characters films we have seen over the years. His is a world of devils, demons, witches, sorcery and towering malevolent beasts. Though in contrast, Hellboy is a likeable spawn of Satan who has chosen a path of righteousness bent on taking down the minions of evil. While you won’t see him wearing a cape, he does battle his enemies with pizzazz, strength, humor, and a less than serious attitude keeping things fun in the process. 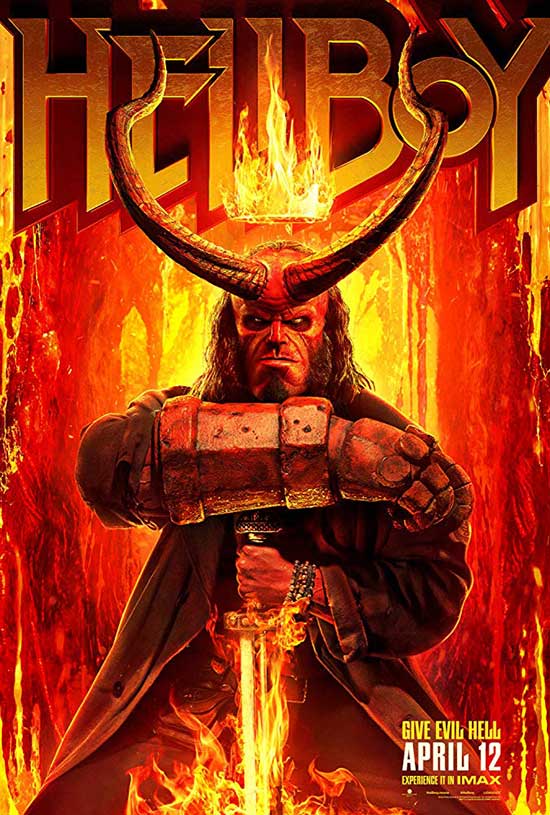 Let me offer this advice. 2019 Hellboy is an exciting film that will satisfy most fans of superhero movies and horror all wrapped in one. The beasts and demons are incredible and the FX work (aka: Mr. X, Rhythm & Hues, Rise FX and Worldwide FX) is simply bad ass. Upon seeing it in theatres, I knew it was one to own….and so coming full circle, Hellboy is now available on blu ray (chock full of cool extras) promising a stellar viewing experience. If the reboot factor is swaying you, don’t let it! – Hellboy is simply impressive!