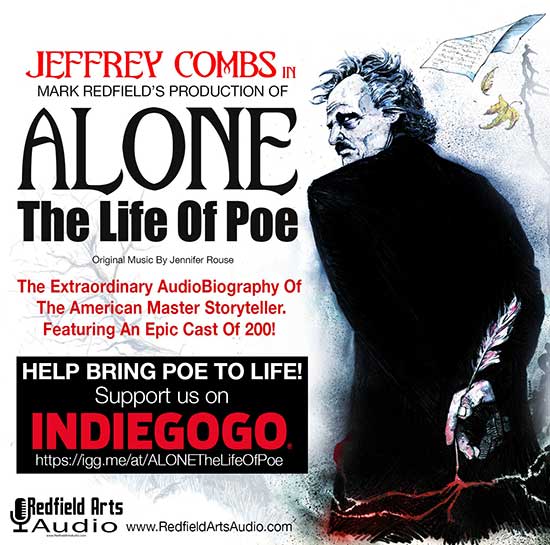 Jeffrey Combs (ReAnimator, The Frighteners, Star Trek) leads an all-star horror voice cast in the 10-hour audio drama of the life, times and mysterious death of American writer Edgar Allan Poe.
“ALONE The Life of Poe” is a 20-chapter, 10-hour audio drama written, directed and produced by Mark Redfield. Jennifer Rouse is the composer and Sound Designer. The project is currently raising initial production funds via IndieGoGo, and goes into production in the Spring of 2019. “ALONE The Life of Poe” will go on sale as a ten-disc CD Box set, and on iTunes and Audible on Poe’s birthday, in 19 January 2020.
In addition to Jeffrey Combs voicing Poe, “ALONE The Life of Poe” will also star Lana Wood (as Maria Clemm), Mackenzie Menter (as Virginia), with Paul Day Clemens, Brinke Stevens, Debbie Rochon, and many others voicing a character list of of 200 roles.
“ALONE The Life of Poe” chronicles the tragic life of one of America’s favorite and most influential writers, from his birth in Boston in 1809 to traveling actors, to his mysterious death in Baltimore in 1849.
Jeffrey Combs is a beloved actor in the horror genre, making his major debut on film in Stuart Gordon’s Re-Animator (1985). Other films include Peter Jackson’s The Frighteners (1996). Television includes guest starring roles in GOTHAM, BABYLON 5, STAR TREK and the Masters of Horror episode “The Black Cat”. This television program lead Jeffrey, with director Stuart Gordon and writer Dennis Paoli, to create the one-man show NEVERMORE: AN EVENING WITH EDGAR ALLAN POE.
Mark Redfield is an actor, author and artist. As an independent filmmaker, his films include Dr. Jekyll and Mr. Hyde (2002) and The Death of Poe (2006). His novels include “Cult of the Nosferatu”. He produces audio drama and audio books with his company Redfield Arts Audio. Edgar Allan Poe has been a life-long passion. He has produced events to raise money for The Poe House and Museum in Baltimore, and served as Vice President of Poe Baltimore Inc., when Baltimore City decided to stop funding the National Historic landmark. He was the hands-on producer on two occasions for the Combs/Paoli/Gordon production of “Nevermore, An Evening with Edgar Allan Poe”, in Baltimore (2010) and in Boston (2014).
The IndieGoGo Campaign link for “ALONE The Life of Poe” is
www.indiegogo.com/projects/alone-the-life-of-poe#/
The Redfield Arts Audio website is
RedfieldArtsAudio.com
Share