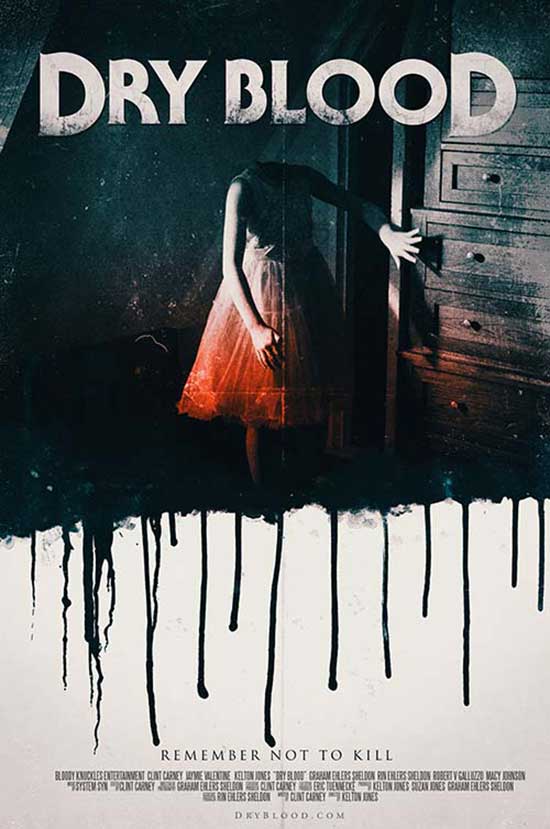 In a rural mountain town, an unstable drug addict must unravel a surreal murder mystery as he’s terrorized by malevolent ghosts, a deranged sheriff, and the frightening hallucinations from his withdrawal.x

Before diving into the review itself, I wanted to mention that I have become a fan of Epic Pictures releases. This being the 5th movie I’ve reviewed under their distribution, I can tell you it’s 5 for 5 as far as their ability to pick really great horror movies to take under their wing. We, as a horror site are pretty inundated with movies hitting us every week that need a attention, so for us to find a company that consistently delivers, is not only a time saver, but a treat! (Other releases of their’s include : The Monster Project, Lasson, Extremity and Terrifier) 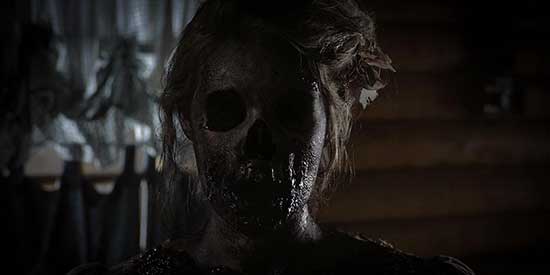 So on that note……………let’s get to the heart of this article, the review. In retrospection, Dry Blood is a really likeable film. Likeable and disturbing…all in one, it has it’s own particular presentation. The movie was written and stars Clint Carney in the prime role as a recovering drug addict, Brian Barnes. The likeability is due primarily to its starring actor Clint Carney, who brings us a seemingly innocent character to relate and sympathize with.

Jumping right into the premise, Barnes, who just wants to get away from the pace of city life heads to a small quaint mountain town that appears to only consist of a general store and a snarky sheriff. As you would guess, Barnes becomes a target for the sheriff (Kelton Jones) who appears determined to mentally harass Barnes with constant surveillance. This actually becomes a comedic point for this story which pokes at Barnes continually to the point of breakdown. However, the constant reappearance of the town’s sheriff gives the horror aspect of this film a contrast (a contrast to where it ultimately ends up). 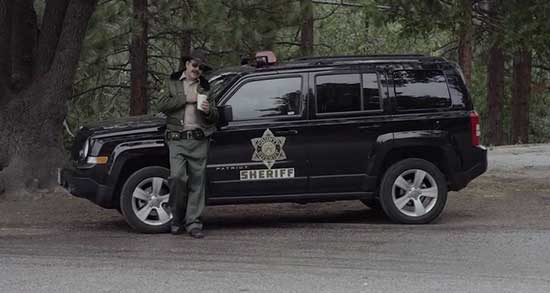 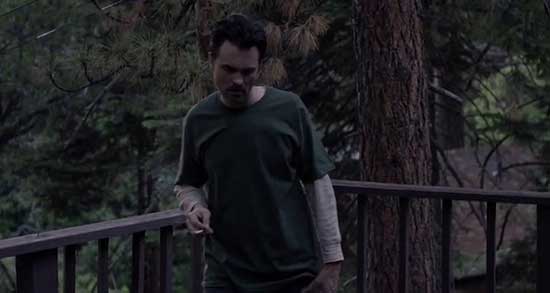 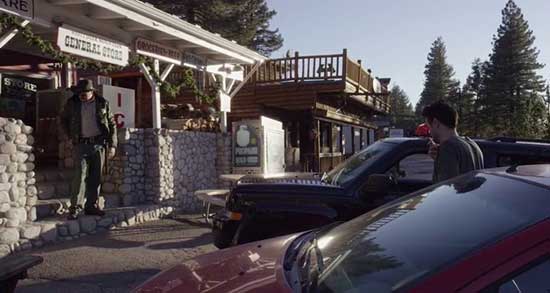 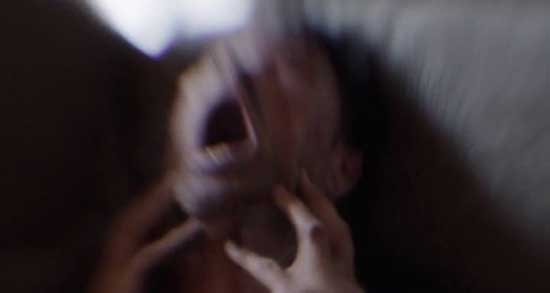 Barnes who can’t shake his demons struggles with his addiction by intaking any substance he can find to ease the pain. This struggle embarks him to call upon his friend and former love interest Anna (Jaymie Valentine). Anna appears shortly after to help him thru his difficult times. We later learn that Barnes owns the mountain retreat, which has served as a getaway from time to time.

The main purpose of this film falls somewhere between a drug addiction hallucinary experience and a harrowing horror film. A horror film that works with all the dynamics of the storyline. 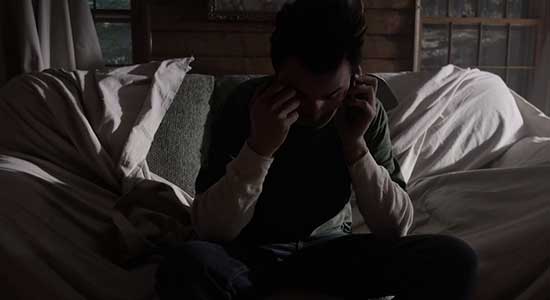 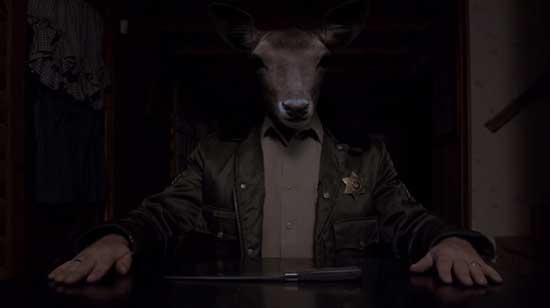 As Barnes goes thru a form of detoxing, he begins to expedience apparitions, specters, and nightmarish visions that seem to only appear to him alone. This prompts a paranoia which also steers the story in new directions. Though as an audience we are subjected to his visions (which range between plain bizarre to hauntingly disturbing). The FX work works wonders here while also staying way within a minimalist presentation (or at least at first). With substance abuse films comes the expected experience that asks the question is it a real experience (for Brian) or just an after effect of the toxins still in his system. 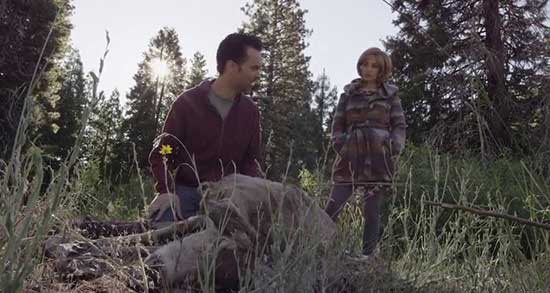 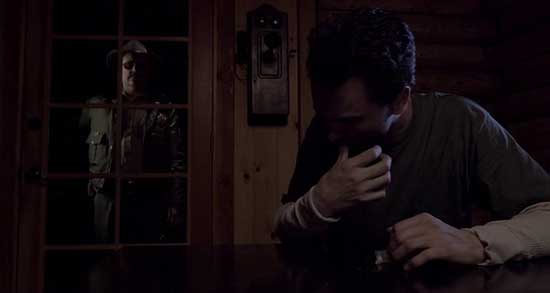 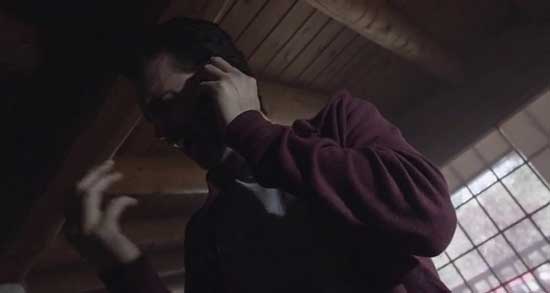 This is elaborated further in the 3rd act of the film which answers those questions and takes the viewer on an extremely heightened visceral ride. Horror fans can rest assured that there is plenty of tasty gore and violent circumstances that makes the wait with the time vested. Dry Blood is quirky indeed making for an original piece comfortable in its own skin.

Again, I felt that Clint Carney, despite authoring the script, was well fitted to play this role. His character’s lackadaisical attitude falls right in line with a kind of “Kevin Smith film” vibe and one that you done expect to elevate to more diabolical levels.

I had heard about this film a few years ago and luckily have just found the time to dig in and enjoy. Readers of this review should take my advice and give it a whirl. There are far more wasteful time consuming films out there that offer nothing in return. “Dry Blood” is not one of them. 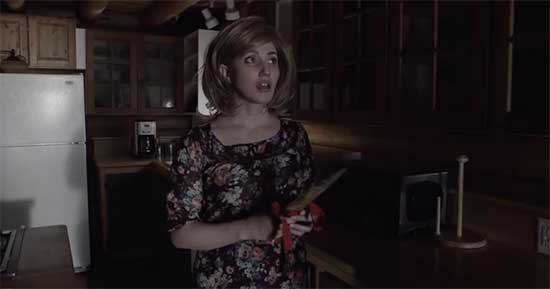 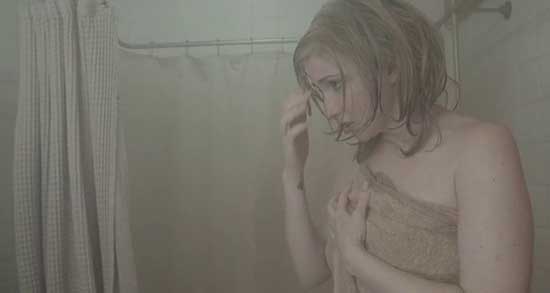 Clint and Kelton Jones make a great team that I’d like to see in more future work, though in the meantime they are talents to keep an eye out for. Special mention to actress and beauty Jaymie Valentine, who was just perfect for this role. Her charm and demeanor remind me of actress Renee Zellweger in that sense. I wish them all the best. Horrornews.net loves Dry Blood!

Dry Blood is now available on bluray per Epic Pictures, and one I recommend to own