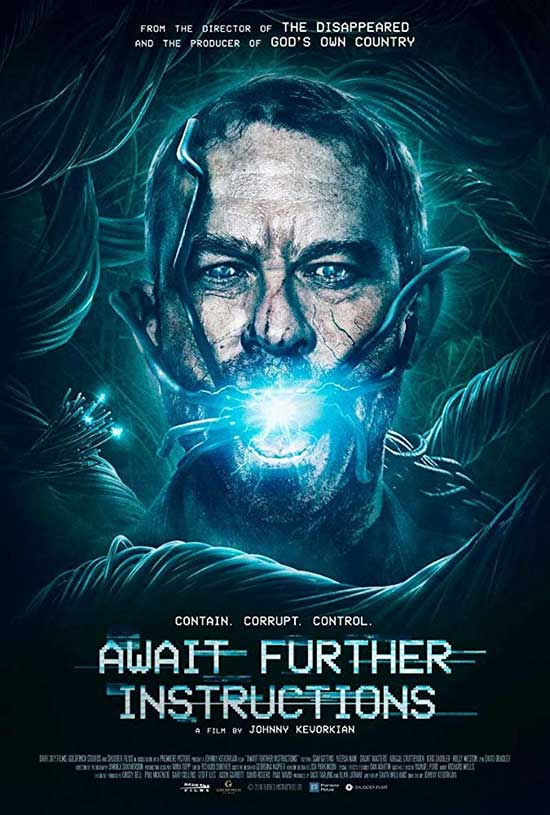 A family’s Christmas takes a strange turn when they awake to find themselves trapped inside and begin receiving mysterious instructions through the television.

There is something to be said for a film that uses an economical approach to setting and location. It can heighten feelings of isolation while keeping your budget utterly manageable. “Await Further Instructions” pushes this concept pretty far, and it greatly helps the film overall.

Sadly, it is like attempting to provide life support to a person savagely trying to end their own life when it comes to this film. 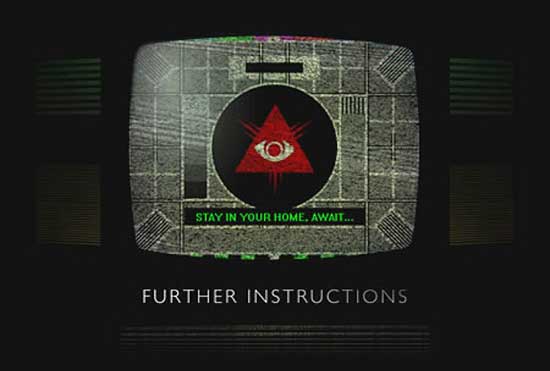 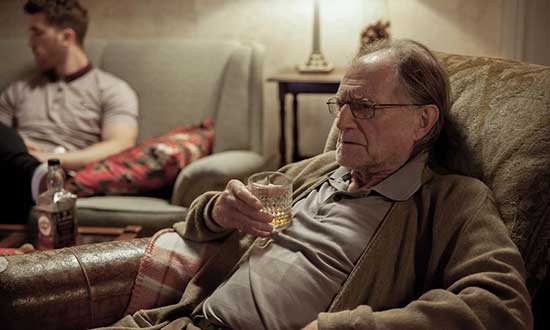 Why hide the fact it really doesn’t work? The leaps of logic, as well as plot turns that seem to take place because SOMETHING had to keep the damn thing moving forward. The cardboard characters meticulously crafted and shaded with all the subtlety of dumping a tub of a single-color paint. The unexplained menace that has god-like power but toys with the characters because we have 80+ minutes to fill. The cliched scenes that has the viewer reciting the dialogue BEFORE the characters on the screen. The characters that are simply more of the kind of people you would most likely cross the street to avoid, so, yes, let us spend over an hour in their delightful company as they go from being damned annoying to making you chant, “Die, die, die!!!”

The most interesting thing about “Await Further Instructions” is this question: What the hell are they on about with this film?

Okay, here’s a summation of the movie: A young man and his new girlfriend go to his family’s home for Christmas. He hasn’t been there (or called) in three years. Instant ruffled feathers with the overbearing father who has massive insecurity issues. Then the idiot pregnant sister and her mostly braindead husband arrive, and she is angry that the return of the black sheep is taking attention from her. She also manages to tap into the prejudice against the son’s girlfriend, who is Indian. The grandfather is a racist bully who delights in causing fights. The mother (played by the sexiest woman in the movie, in my opinion) is a limp rag who lets everyone else run the show while she avoids conflict as much as possible. 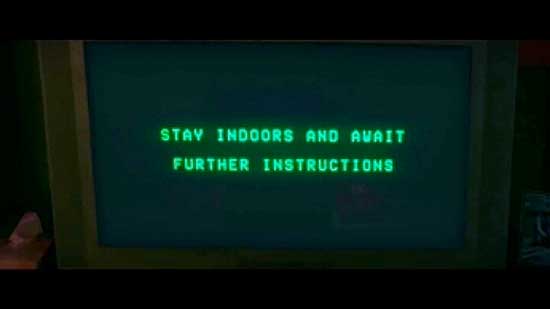 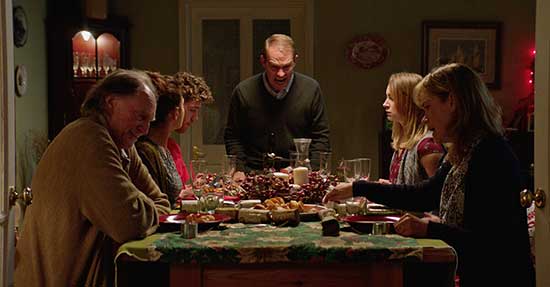 As the characters are introduced, the television runs a series of news reports about electrical disasters, increased random violence, and what seems to be a terrorist threat nationwide.

Come the next morning, the house seems to be encased in some very weird substance that looks like it is made of coaxial cables woven together. No Internet, no phones, not a single luxury…sorry, even “Gilligan’s Island” is more appealing to my mind. Yet, oddly enough, the television works, and it begins issuing directions to the occupants of the house.

In short order, everyone is at each other’s throats, though, Heaven knows, none of them were more than 3 words and 2 seconds away from attempting to kill each other when the film started. Fingers get pointed when they aren’t getting snipped off. People die. And the telly starts making with the whole God Complex. “Worship me.”

Reasonable idea, but what’s the point? This is a family that should stay the hell away from each other. They really didn’t need some unexplained threat to push these people into violence. Just some cranberries in the shape of the tin can they came in would be enough for a shotgun massacre at this gathering. We can take “family crisis” off the plate. 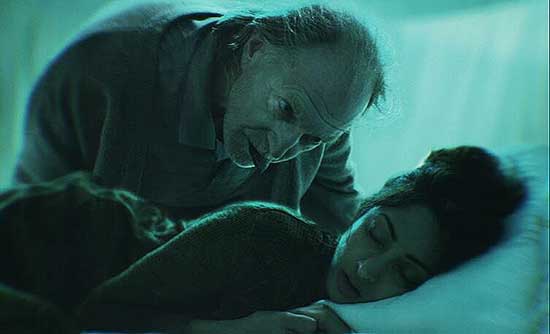 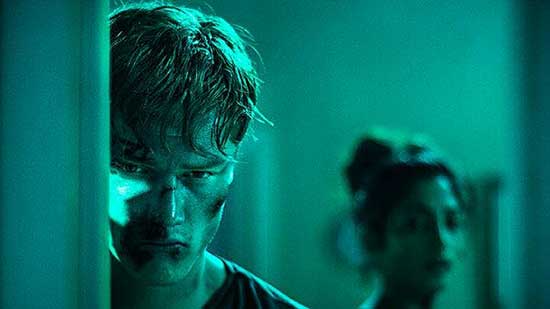 Is this some strange commentary on our dependence on media? Could be, but considering it is centered around the TV, the message is poorly related. Most people I know spend as much, if not more, time on their phones as they do watching TV. A film taking a shot at obsession with news and official government directives is at least a decade too late. Plus, “Videodrome” was far more adept at such an obsession with image, so this concept is not workable unless the filmmakers have never heard of smartphones and/or tablets.

That pretty much leaves us with the film taking a swing at our obsession with what is truth in this world of “fake news”, full-motion digital impersonation, and opinions/feelings as truth (see Twitter and Facebook for daily does of this stupidity). The characters have no access to the outside world except through the TV that they assume is broadcasting government directives. No way to verify anything you are being told, so the characters decide to act on faith that it is the government speaking to them and that the government knows what it is doing. But faith is in short supply these days, as evidenced by the internal conflicts of the family inside the sealed house. Even the rather out-of-place ending seems to support this theory. Somewhat. 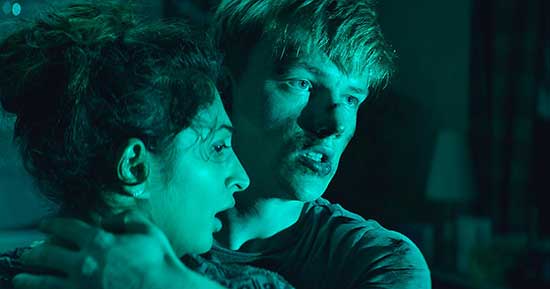 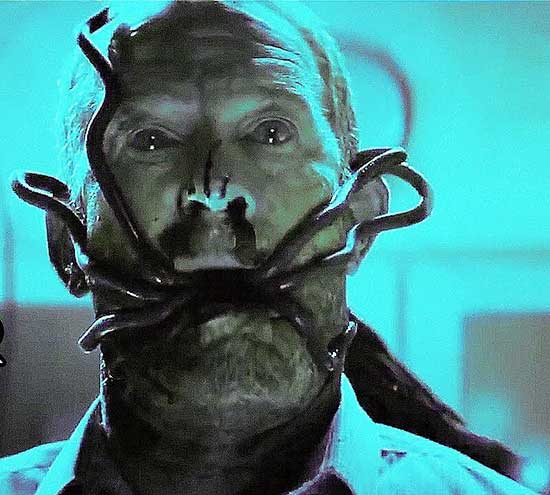 Not having a clear idea of what the object of the story is makes “Await Further Instructions” a tempest in a teapot. Lots of stuff happening but none of it seems to matter or even make complete sense in the end. That’s a shame because, technically, it is a well-made film, though the sound was a bit soft in my copy. The acting was minimal but functional, with David Bradley (Argus Filch from the Harry Potter films) giving the best performance. All the elements were there, except a focused script with point.

“Await Further Instructions” is watchable if you aren’t looking for subtlety and don’t mind some politically correct finger wagging, British-style. Otherwise, find something fun to watch, like “Dr. Minx”.