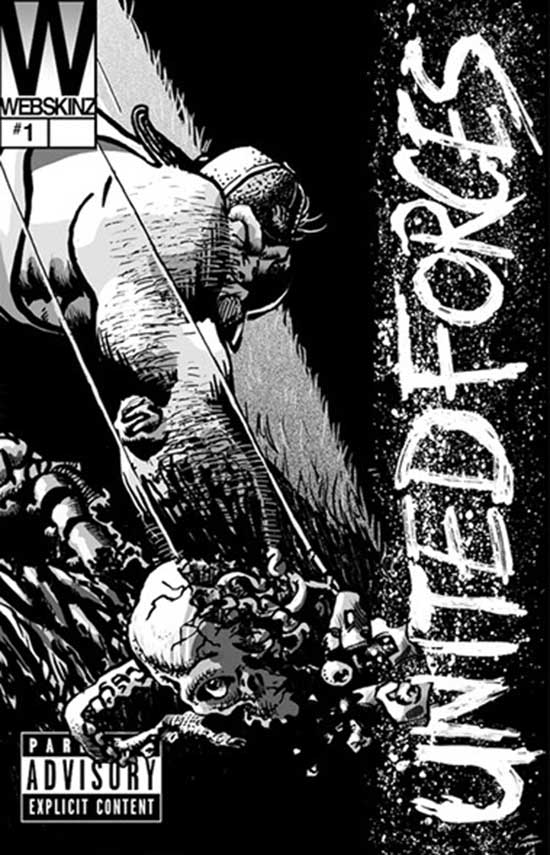 Hey there horror and comic fans we got a new contender in town. This latest review looks at the comic book/ zombie franchise that just emerged under the title of “United Forces”. now I wont’ waste any time driving you over to the right spot, as you can learn more about this organization and their products at unitedforcescomic.com

The team here were nice enough to send me a few samples of their goods which range from comics, T-shirts, a music CD and even a bottle of meat sauce called “Living dead sauce”. So this team is already off in the running with a nice start indeed!

Here are the PR details on that:
Living Dead Sauce is a slow roasted, caramelized garlic, cumin, and cayenne sauce. Delicious on a variety of meats and veggies, and is packed with enough flavor to wake the dead!!!

Now onto the main event!
United Forces is a brand new (currently 3 issues) comic line that features the artwork/writing talents of Gary Dufner and Phil Avelli. They currently they have completed their 3rd issues of this run which is self described as “heavy metal indie comic art”. Fans of the undead will undoubtedly find great rewards checking out this team’s work which is methodically drawn and inked in fine detail. The artwork itself was originally conceived in the 90s drawn upon a whole smattering of influences that ranged over that period. Never-the-less, with the fueled interest in today’s market to that of things undead and walking, the team have emerged with a great start to their ongoing epic. 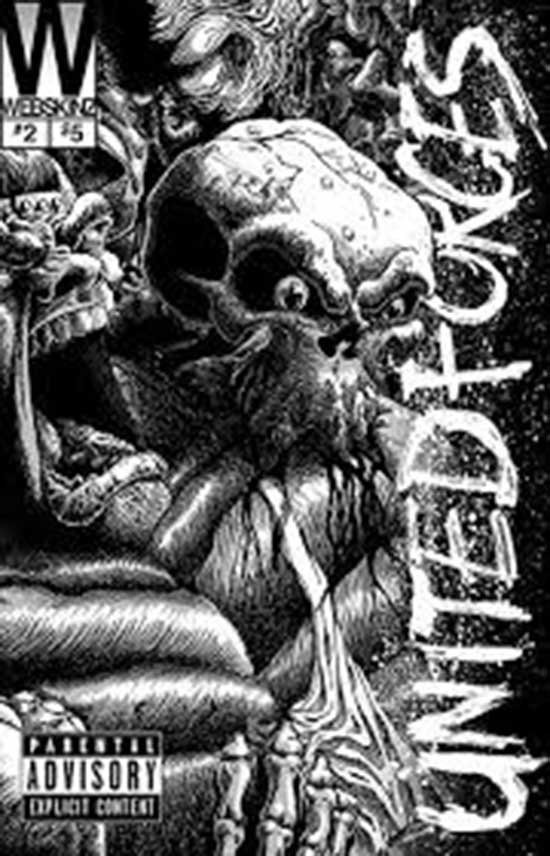 The panels here are presented a bit different than standard comics using full page art combined with half page graphic sequentials that tell the visual aspects of this story. To help us along, you’ll usually find the narration of what’s occurring in between as they tale us on this complex journey.

Because of this style it took me all 3 issues to get my bearings and connect the dots a bit. Though we arrive on a funeral which later turns into a living dead emergence that is energized by a strange looking orb (was this the orb that we came to love in the “Heavy Metal” (1981) film of long ago?…probably not….)

As it appears this orb is at the center of it all. Pushing forward a zombie outbreak, the orb empowers the buried grandfather to arise and deliver itself to a lonely caretaker by the name of Phil. Phil a local caretaker who lives behind the cemetery is suddenly thrust into a surreal reality that the dead are waking up. Though the orb itself reveals to Phil that he is suddenly burdened with delivering this orb to an institutionalized heavy metal singer by the name of Victor Vetika. Victor who got into a bit of trouble himself, now finds himself wrapped in straight jacket awaiting whatever lies ahead. This includes frequent visits by his girlfriend Heather.

As Phil works his way thru a newly awakened graveyard, he wastes no time in chopping heads and sawing thru corpses to both escape their mob-like clutches and figure out what has caused this sudden shift in other-wise dead and buried bodies running rampant. The dead are unrelenting in their pursuit which also appear to be driven by some form of fantastical elements such as possessing some of the living along the way (to seek out the orb) and a pair of reoccurring entities who appear to emerge from nothingness. 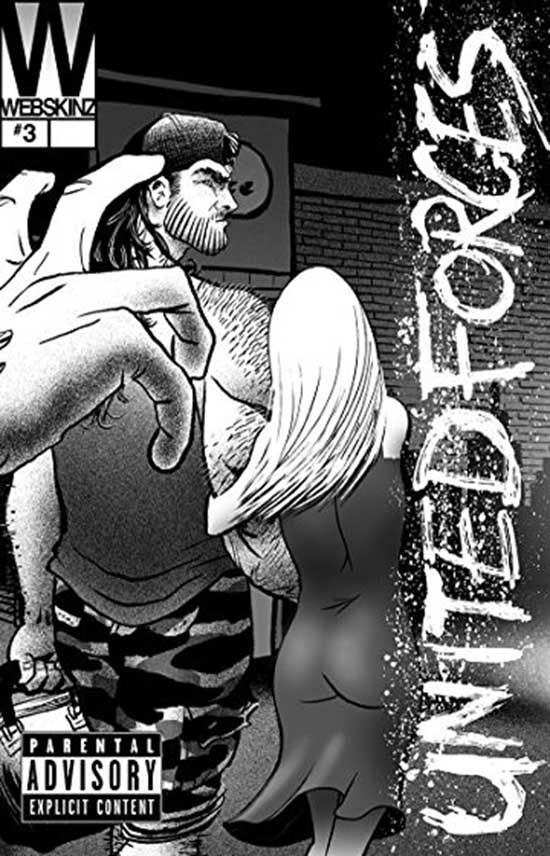 It’s an fantastical and horrific start to this story which is nicely illustrated per the creators of this line. United Forces indeed takes paths of its own to bring its tale to life. The fun here of course is in the graphic detail and gory presentation which while inked in black and white, still get the point across. I was reminded of imagery such as “Sin City”, “Heavy Metal” and retro magazines ” Eerie” and “Creepy”. It’s fun to read and alot of fun to look at. I’d love to see this all transform into a graphic novel down the line…

I am anxious to see where this line goes and wish the team luck! So take a leap on over and check out this team’s work! 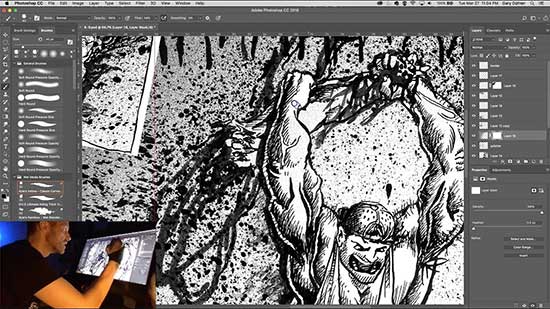 You can also take a closer look at their production process here which has a few videos to check.

PR SYNOPSIS:
A cemetery caretaker’s midnight shift goes sideways when a dead man rises from his grave to give him a magical orb and a mission, to deliver the glowing orb to his Grandson Victor. Only two things stand in his way, Victor Vetika is a reclusive world famous singer and he currently resides in Enasni Hospital for the criminally insane for murdering a group of fans at one of his sold out shows. As he travels to Enasni Hospital the caretaker discovers he is being stalked by the dead, powered by souls from another dimension.