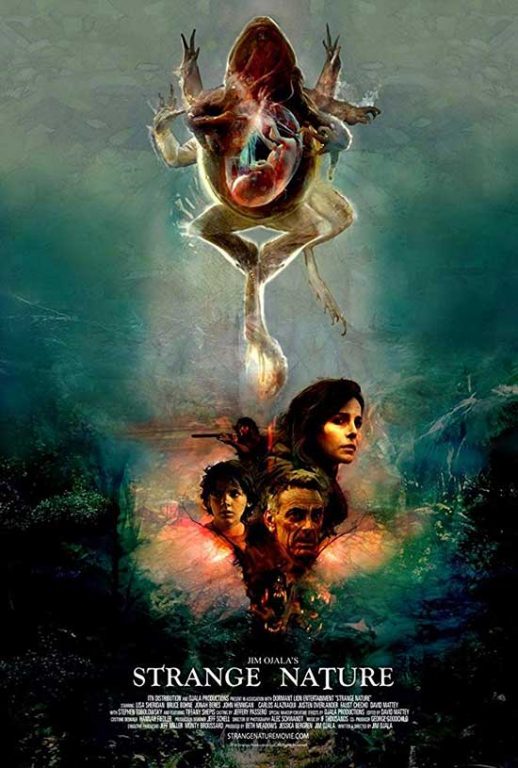 The first film to expose unsolved wildlife deformity outbreaks and where they may lead.

A reasoned person would not necessarily need a lecture by Al Gore or Erin Brockovich to be enlightened on the fact that our constant reliance on chemical products unleashes a particularly severe level of harm to not just our ecological system surrounding us but our own bodies as well. The evidence of cancer development and birth defect is on display for all to see. The folks in Flint, Michigan have been dealing with their very own ecological nightmare of alarmingly high levels of lead showing in their water since April of 2014. Remember Erin Brockovich and her suit against California’s Pacific Gas and Electric regarding the drinking water of the Southern California town of Hinkley being contaminated with hexavalent chromium? Now, before I lose everyone with more chemistry terms and historical references, I’ll stop there.

I will say that Hollywood has long found a uniquely minable source with this ecological horror backdrop. A way to mix reality and educational moments with raw horror themes. A way to take viewers to school and scare the pants off them at the same time. In the 70s there were the cheap potboilers such as Dogs with David McCallum and Day of the Animals with Christopher George and his megawatt grin. It had died down just a bit since the early 80s, with only a few notable low-budgeters such as 1982’s Deadly Eyes and Bruno Mattei’s 1984 opus Rats: Night of Terror dotting the cinemascape. Speeding forward to 2018, James Ojala takes a stab at things with Strange Nature, based on true events that occurred in Henderson, Minnesota in 1995.

Struggling young pop singer Kim shows up with her son to the Minnesota home of her ailing father, Chuck. Soon after, she begins to take notice of a surprising number of mutated frogs (extra limbs and an odd number of eyes mostly) popping up along Lake Superior. Concerned that it may involve pesticides in the very water the citizens use for drinking, cooking and bathing, Kim begins raising the issue with local folk and the city’s mayor. The mayor strikes her down due to an unwillingness to go up against the company at the center of this pesticide mystery because it is the main job source for the citizenry. As Kim keeps carrying the torch, other animals with deformities (including a two-headed wolf) start attacking the populace. Further, babies are being born with pronounced birth defects. Can this nightmare be stopped?

In August of 1995, students on a field trip near Henderson, Minnesota came across hundreds of deformed frogs occupying a pond (many with spinal and limb deformities). By 1996 35 states, 3 provinces in Canada and the preponderance of Minnesota’s 87 counties were reporting mutated frogs appearing. For two years from 1998 to 2000, agencies from Minnesota Pollution Control to the Environmental Protection Agency investigated. Evidence was inconclusive as to the cause of the defects. Writer/Director Ojala, a native of Duluth, followed the story of the mutated frogs with interest. The gestation of how the film came to fruition was something of quite the long road for Ojala. He’d started his screenplay in the early 2000s, basing much of his information on William Souder’s 2000 non-fiction book A Plague of Frogs. Prior to principal shooting being completed in August of 2014, Ojala had trouble even securing financing for the picture due to his insistence on using as much of the actual locations where events took place rather than the more popular places like Louisiana or Bulgaria that producers opt for.

Having been a horror special effects guy to that point, he enlisted the aid of Fangoria in promoting a kickstarter campai\gn he set up to cover some of the funding. It ended up making some $46,000. With filming already completed in Minnesota, pick up shots and effects scenes were finished by November 29, 2015. Post-production was not wrapped up until June 20, 2017. This was, perhaps, due to the struggle for funds as is common with independent films of this type. The struggle for financial backing may also lay in a reluctance by potential funders to be attracted to a project that is considered the first ever picture to deal with wildlife deformity outbreaks and the root cause. Not so simple of a subject to be able to market, especially to scare show fans.

Despite the trappings of blood, gore and horrific imagery, Strange Nature is not presented as an out and out horror film. In fact, minus the splatter and grotesque puppetry of the animals, it plays much like a premium cable docudrama as Kim fights obstacles and hurdles thrown at her. She’s even allowed a few moments of speechifying and rabble-rousing that felt closer to pieces that Julia Roberts or Meryl Streep would reach for. I found myself quite impressed with Ojala’s desire to have this personal of a project be elevated well beyond the level of terror fodder. It does make for a minor disappointment in the finale when Ojala relents to some predictable horror tropes. He does keep that relatively brief, however, and makes sure the final wrap is anything but the “We won! The evil is defeated!” feel. The last moments rather awkwardly shift back to prosaic resolution with promise of investigations and such.

All the mention about the drama aspects of this movie Ojala, Art Director Vanessa Lara, and Visual Effects artist David Mattey deliver on the frights and grossout moments in spades. The two-headed wolf appearing in the climax was a true cringe-worthy sequence for me, a standout amongst several unsettling points. It looked to be a rather seamless mesh of digital and puppetry, combining for a tense realism. Credit here to the music department and composer Tasos Eliopoulos for the mood appropriate music timely inserted. A mix of soft and serene with kinetic and a pulse of urgency.

There is a certain air of rejoice when an independent project attracts veteran actors to lead the cast as well as lend an aesthetic credibility of sorts to the proceedings. Lisa Sheridan is an artist I’ve followed with some regularity since her Larkin Groves role in the neat 2005 horror/fantasy series Invasion. She has always leaned toward the tough yet vulnerable heroine and the Kim role is an easy fit for her as a result. Stephen Tobolowsky, as the morally questionable Mayor Paulson, draws from a more than four decade career as a character player to bring depth and a shade of realism to the Paulson role. He is essentially the physical villain by proxy/fall guy here since the pesticide corporation behind it all is never really seen. Even if it is coerced, I did appreciate him finding his moral center in the end. It offered a hint of humanity and something beyond the archetype.

Honestly, if you are seeking a pure gore shocker entry for late creature show viewing, you’ll want to look elsewhere. If you are looking for cinema that gives you pause to think in between splatter gushes, Strange Nature delivers the goods. Now, if only bloody effects could’ve been inserted my grade school educational films. I might’ve stayed awake through more of them!