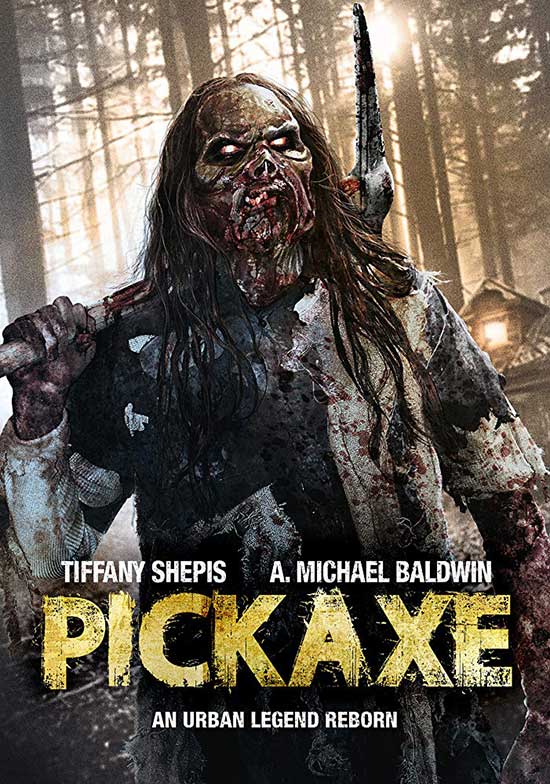 1982: The survivors of a series of brutal killings in a small town thought mass murderer Alex Black was dead and buried after the townspeople put an end to him. But teenagers experimenting with the occult awaken the monster from his grave and he begins another rampage of terror with his favorite tool, a pickaxe. Only those who have faced him before have any chance of stopping Alex Black once and for all.

Well, what can I say about the movie Pickaxe (directed and written by Jeremy Sumrall)? I will say that growing up in the 80’s I was privy to the first run on some of the arguably greatest slasher films ever made. A Nightmare on Elm Street, several of the Friday the 13th and Halloween releases, Silent Night, Deadly Night, April Fools Day, etc… I’ve watched horror movies since I can remember so I feel safe to say I know a thing or two about what constitutes a good slasher/horror movie. What I can say about the movie Pickaxe is that it doesn’t fall into this category. Filled with some of the most seriously terrible acting I’ve ever witnessed on screen, blood and gore scenes that are laughable, time hops and transitions that make no sense, and so many flashes of boobs that it actually started to get boring (after seeing 20 sets of boobs the novelty starts to wane) I may be able to state this will be the worst movie I will see in 2020. However, the year is young and there is a lot of time to disprove this theory.

The movie opens with a man and a woman getting it on in the forest while on a mission to find an amulet that belonged to the now deceased mass murderer Alex Black. We get an eyeful of the movie’s first set of boobs, then man seems to come upon the amulet right where they had been having sex. The woman returns after going off to pee in the woods, then takes an axe and kills her lover. Covered in blood she screams some Latin words that resurrect the once dead Black. Cut to some text on the screen that provides a bit of back story and we come to find out that Black was a crazed killer thought to be the son of Satan. He went on a rampage in Camp Arapahoe back in 1982 and killed several teens. It is now six years later, and Black has come back from the dead to finish what he started.

The opening scene to this movie was the best part and it just gets worse from there. It’s now 1988 and we are introduced to a group of teenagers who scored some tickets to a rock concert taking place in the town of Woodland Hills. The teens head out to the concert but stop at a cabin in the woods to get their pre-game on and of course engage in lots of mediocre sex involving some rather unattractive people that look closer to middle-age than teenagers. It’s ridiculous how much they do not look like teenagers and how absolutely terrible the acting is.

Around this time, we are introduced to Adrienne (Tiffany Shepis). She killed Black during his first rampage in 1982 and has been in and out of mental institutions. She drowns herself in copious amounts of alcohol in order to deal with with her emotional fallout. Spending much of the movie drunk, it’s hard to even tell if her acting is any good, but I would say it’s a bit better than the group of “teens” we are forced to follow, which is not saying a whole lot. Another main character in the movie is Sheriff Matthews (A. Micheal Baldwin) who apparently played a part in killing Black back in ‘82 and likely had a fling with Adrienne, even though he looks old enough to be her father. Adrienne tries to warn him that Black is back after he tells her about some dead bodies he found, but of course he doesn’t believe her since she lost quite a lot of credibility with her stint in the mental hospital and her raging alcoholism.

At some point the group of teens make their way to the rock concert and it’s here were Black shows up to continue his killing spree. Black makes his way steadily through the throng of people, managing beheadings with a pickaxe, eye gouging, and disembowelment. Most of the crowd of people just stand around and scream for a good while before finally running off. The group of teens get away and drive over to the cabin to pick up a younger brother they left behind. Somehow Black teleports himself over to the cabin (he was just at the concert and didn’t have a car) and all but one of the group is brutally murdered. The last surviving teen, Heather (Ashley-Marie Zgabay) runs through the woods, predictably tripping and falling along the way, and eventually Black catches up with her. About when he is going to take a pickaxe to Heather’s skull, Adrienne and Sheriff Matthews show up and shoot him in the chest. Even though Black didn’t seem to be fazed by bullets previously, these bullets must be special because down he goes. Of course, every horror/slasher movie fan is going to know at this point he is not dead. Predictably, he gets back up and kills Adrienne, then almost kills Heather, but a group of townsfolk show up and pump him full of bullets. Heather grabs the amulet from his chest and destroys it, which should kill him for good, but the last scene shows him rising once again and grabbing Heather.

Everything I’ve described in this review is generally all you need to know about this movie. I don’t expect award winning performances in a slasher movie, but I think I could have done a better job and I have not acted a day in my life. The dialogue seemed forced and there was zero appeal to any of the characters. Even the murderous son of Satan Alex Black was not scary or believable when you have him basically teleporting from scene to scene and victims being served up on a platter. At one point in the movie one of the teens decides to run up to Black and challenge him to an unarmed fight, which of course ends very badly for the teen. At another point in the movie Black rips the shirt off a woman (queue more boobs) and she yells at Black for ruining her best top, then runs off. I guess he felt bad about that since he didn’t kill her? There were a few scenes I laughed, but not because it was one of those “this movie is so bad it’s good” deals, but because it was just that stupid.

Terrible acting aside, I would hope that in a slasher movie the murder and gore would make up for this flaw. I was prepared to be disappointed because the murder scenes were repetitive and made no sense most of the time. Black managed to disembowel one of his victims with one swipe of his pickaxe and we get to see the victim writhing on the ground and screaming in horror at what looked to be sausages covered with marinara sauce. Apparently, this is what they thought would make believable intestines. Also, the murders were not very creative. Pickaxe to the head, pickaxe to the gut, and blood spewing through the mouth comprised most of the murder scenes. 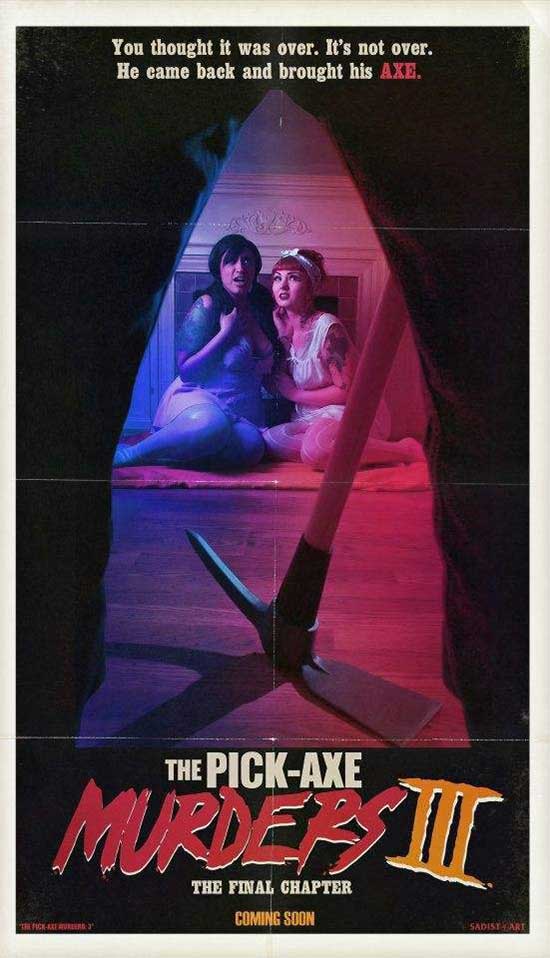 Last, the storyline and time sequencing were just plain lazy. They would have characters hopping to different scenes throughout the movie when it just wasn’t possible unless they teleported there or had a clone. If the movie had taken place over several days instead of basically one very confusing evening, this may have improved the inconsistencies. Perhaps due to lack of budget or time they had to rush through it, but not much thought went into making sure the timing of each scene made any sense at all.

I have likely devoted more time to this movie than it deserves, and you shouldn’t waste your time watching it. It is good for a few chuckles due to how utterly awful it is, but that’s about it. Of course, if you really like seeing multiple sets of boobs in various sizes and situations you might take a gander, but then that’s what the Internet is for so it’s probably still not worth it.