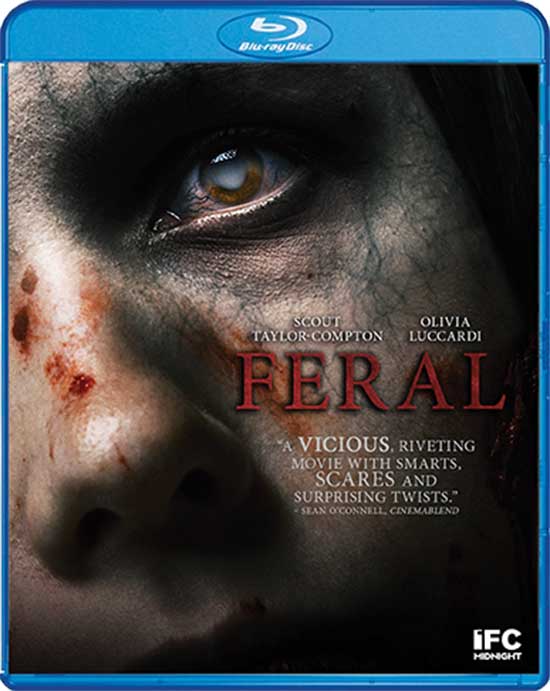 Medical students on a celebratory camping trip run afoul of a mysterious creature and a local hermit.

Feral (2017) is Writer/Director Mark Young’s indie film take on the monster-in-the-woods horror yarn, and the debut from co-writer Adam Frazier. The movie follows a group of incoming med students whose weekend camping trip falls prey to a monstrous entity hiding in the woods where they’ve set up shop. The film hits the right notes with serviceable performances and effective direction, but the script lacks the originality and power needed to make a lasting impression. 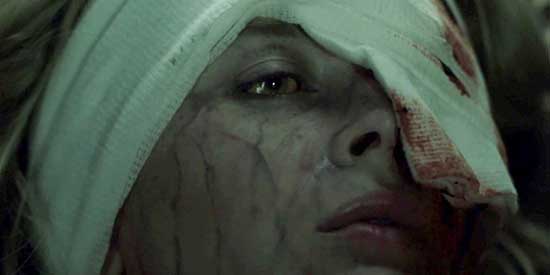 The group of youthful campers this time around is made up of homosexual couple Alice (Scout Taylor-Compton, Rob Zombie’s Halloween and Halloween II) and Jules (Olivia Luccardi, It Follows 2014), and their four friends Brienne (Renee Olstead, Unfriended 2014), Jesse (Brock Kelly, Pitch Perfect 2012), Gina (Landry Allbright, How the Grinch Stole Christmas 2000), and Matt (George Finn, Time Lapse 2014). Unfortunately for them, there’s a monster who already pegged the very same woods for its feeding ground. As the terrified kids get picked off one by one, they find the only help around is in the form of a creepy hermit named Talbot, played by genre-veteran Lew Temple (The Walking Dead series 2010, The Devil’s Rejects). Trouble is, Talbot has a secret, and it may be that he’s a gruesome murderer. 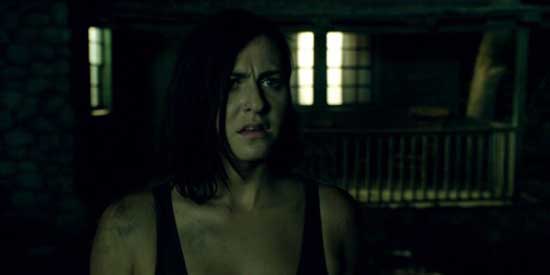 The monster has a bit of a backstory, too, though it’s all offered via exposition that renders it unimportant to the plot, and thus to the film as a whole. The makeup effects on the creature are nice, but like the plot, they feel unoriginal. The beast looks like something between the vampires in Buffy and the Reapers in Blade II, and you never get a good enough shot to second guess its quality. There’s some decent physicality to them, though, and it’s interesting to see them hunkering in trees and lurking in the underbrush. Gore is present but not heavy, and isn’t anything that freshman film students won’t see and think “I know how they did that.” It’s not the focus, though, and the struggle to survive is smartly put at the fore.

The script does a good job with the pacing, and nothing gets particularly slow. However, the dialogue for the short-lived friends isn’t as good as the stuff given to the longer-lasting members. The characters in general are missing a deep motivation beyond their whatever’s in their character descriptions, but the actors do enough with what they have for us to ignore that and enjoy the ride. 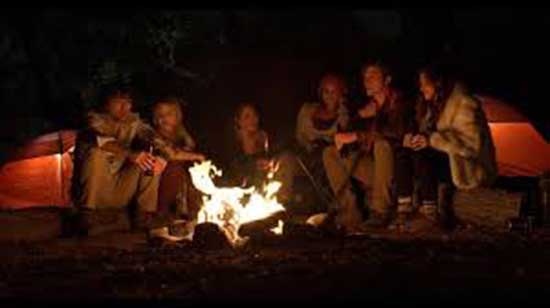 The acting in Feral is good on the whole, with the weaker-performing friends dying first, and Temple providing the ominous-old-man vibes with expert bad-juju oozing from his pours. Taylor-Compton and Luccardi are excellent choices for the love-struck leads, with Taylor-Compton playing the strong, take-charge leader, and Luccardi playing the soft-spoken defacto apprentice. The fact that they’re a gay couple could, in a different film, add some interest, but the only time it really comes up is when one of their monster-fodder friends doubts Alice’s true sexuality. The event has no impact on the story, and while the characters’ sexualities certainly don’t have to be a focus, it feels as though it was intended to be somehow groundbreaking and isn’t. 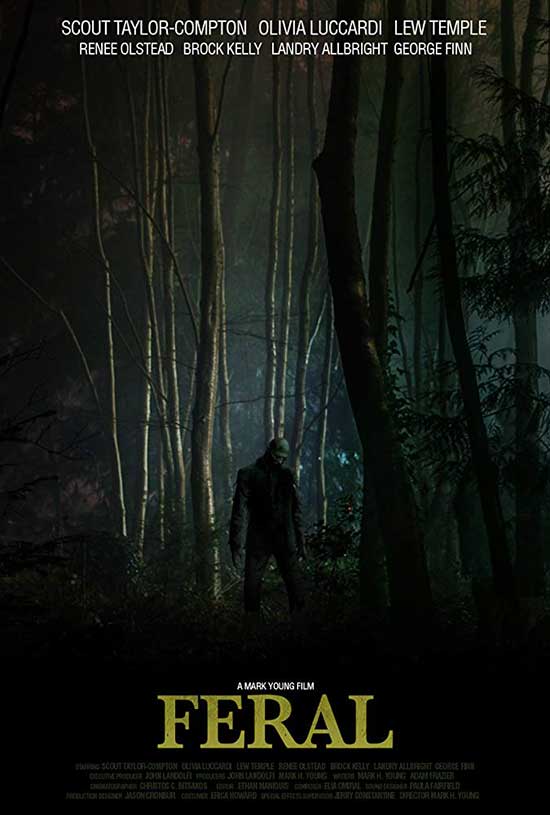 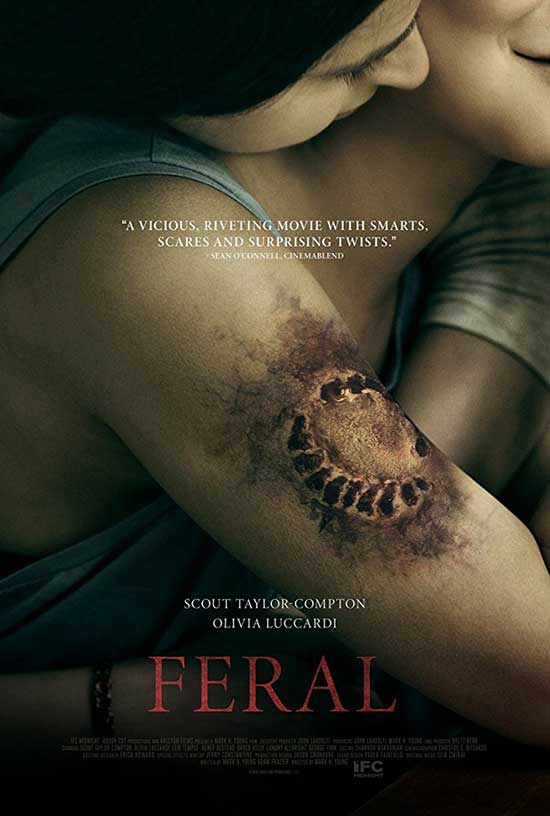 Overall, Feral offers some tension, solid production, and a spooky looking beastie terrorizing young folks. The attempt at modernizing the old formula with lesbian lead characters in strong roles is a nice idea, but it’s represented realistically enough that it’s just as tired as if the couple was straight. The lack of anything original in the mix keeps the film from rising above other films of its ilk, and Feral sits right in the middle of “good enough.” Still, if the idea of some indie-monster terror in darkened woods lights your pilot light, then give Feral a go. You may not remember it next year, but you’ll be entertained for the night.