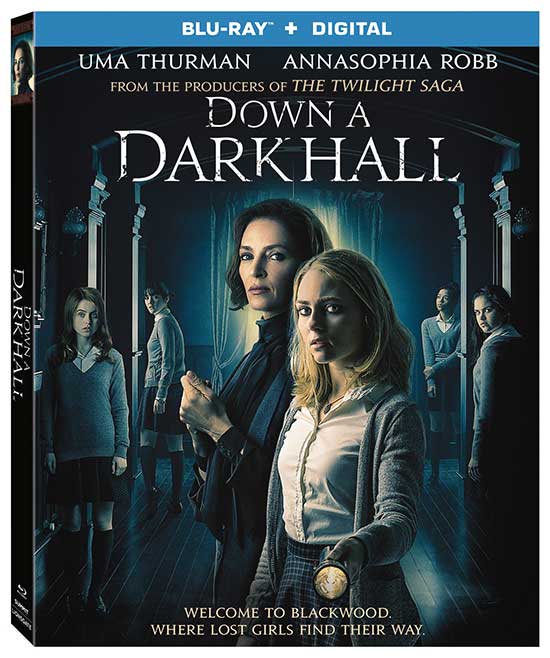 One of the draw points for me in watching a horror film of a type that involves a cult or coven (even a loose grouping of people) is having the antagonist have that face of gloom, doom and out of control righteousness to their cause. Uma Thurman has that countenance and more. What covers her look is a haunting beauty that you cannot look away from. It is this mix of creepiness, ghostly serenity and high cheekbones that are nicely utilized by director Rodrigo Cortes for his fantasy/horror excursion Down a Dark

Hall. If only the rest of the film were as gracefully put together of a package.

Still reeling from the death of her beloved father, teen Kit Gordy acts up to such extremes that her mom and step-dad are forced to send her to the special Blackwood Boarding School. This is not the kind of school you’d find on Yelp nor, likely, on too many road maps. A sprawling manse in the woods that is run by Madame Duret (Thurman, channeling Billie Whitelaw at her most severe and vile), Blackwood has more dead spirits moving about than live people. It seems that the weird Duret and her staff have a plan for Gordy and four other teens and it doesn’t involve English 101 and parent-teacher conferences. Duret has the ability to communicate with the dead. Specifically, dead artists out of history who are pining to complete some unfinished work. The girls are to be vessels for the restless spirits so that they can tie up the loose threads in their lives. To save herself and her friends from becoming the unwilling hosts to these malevolent entities, she must first resolve her own closure issues regarding her late pop. Aiding her is Duret’s son, Jules, who appears to be developing an attraction to our young heroine. 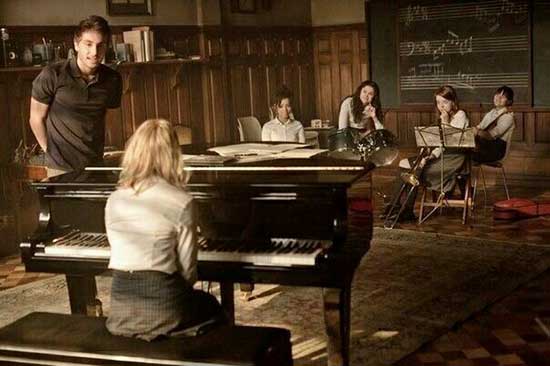 There is an intricacy in presenting the seamless when making a ghost story such as this. Perhaps this is why many a fantastic director has not even attempted such an undertaking. I give much credit to Cortes for dressing this tale as well as he does. He has a keen eye for the visual in the gothic motif. I’ve not felt old Victorian so tangibly in some years. With Cortes having such a relatively short resume (11 credits, this being his 3rd feature), it seems safe to say he drew less from work experience in atmospheric costume chillers and more from what he grew up with. 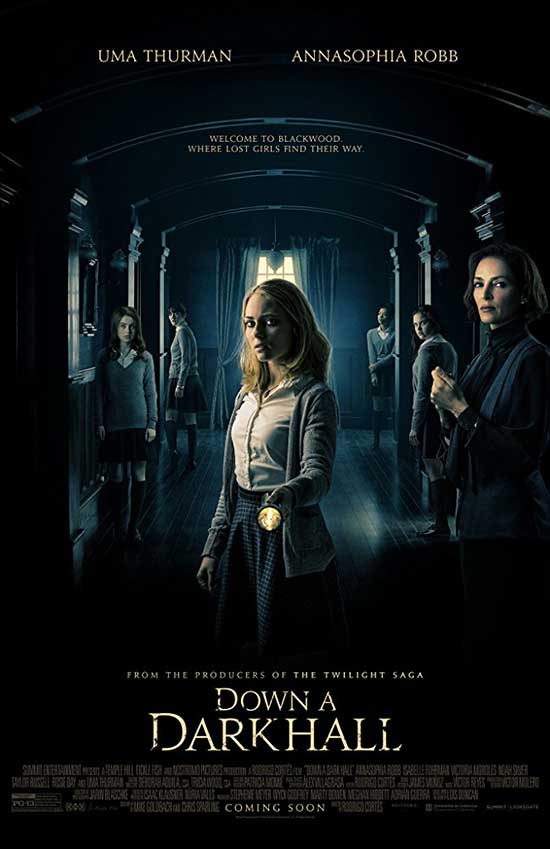 The lingering shots of wood-paneled hallways, the foyer, and the dining hall elicit fond memories of the very best of Terry Fisher’s work with the classic Hammer films. In fact, Victor Molero’s Production Design had me flashing back to Set Designer Bernard Robinson’s artistry for Hammer as well. Brief images of Chris Columbus and the sumptuous look of the early Harry Potter films flittered in a mite but that may’ve been just the J.K. Rowling fan in me playing around. No doubt Cortes learned, at some point, that step one in creating the foundation of visual style for a film is to budget for scouting locations. Step two is to find just the right locations. Using the island of Gran Canaria in Spain (as well as the capital Las Palmas) for shooting seems rather inspired. Extensive countryside for the right isolated feel. The fact that Las Palmas was ranked as the best climate in the world in 1996 in a scientific study may’ve provided some relief in the area of problems with the shooting schedule due to weather. In any case, the exteriors fit the action and events like a glove.

Now, if only the director didn’t bring along a few tired tropes in his bag along with the solid skills we wouldn’t have such a bumpy ride to the finish. Some of the fault falls on writers Michael Goldblach and Chris Sparling (adapting Lois Duncan’s best-seller) in creating a hero and heroine who come off as decidedly weak in the era of much stronger, survival-obsessed protagonists. The trio were reaching for the vulnerability of the characters, and that comes out in spades early on with a remarkable freshness. Yet both show very little physical fighting ferocity as the finale looms. Duret’s henchwoman, Mrs. Olonsky, takes both down with ease in one sequence.

Mistakes are made here in allowing Kit too much time on hysterics, fear, and crying (Only thing that was missing was her being chased and tripping on something) when more effort should’ve been spent on imbuing resolution in her to retain possession of her body and fight back. Wasn’t quite looking for Sigourney Weaver level but a little Dee Wallace/Cujo vibe would’ve been nice. Similarly, Jules de-evolves into the David Manners love-sick pup of a good guy, which gets a bit tiresome in the end. The big groan and quiet proclamation of “trope!” from me came during the climactic moments. Haven’t we seen enough of the Roger Corman-esque “Let’s burn down the creepy old house/castle for a nice, fiery finale” bit before? There’s even the sacrificial hero moment that I could see coming about 5 minutes beforehand. It had a strange feel of a climax that was ordered inserted by someone higher up in finance who wanted a pyrotechnic display because everything prior to it is an attempt at something fresh and original. 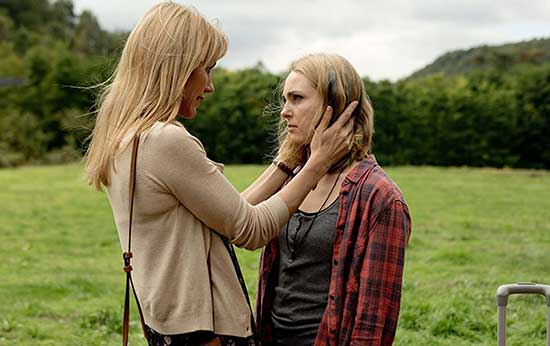 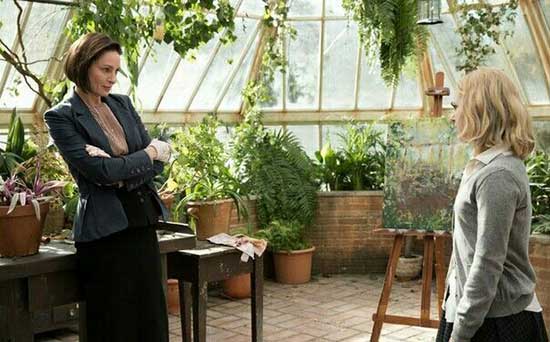 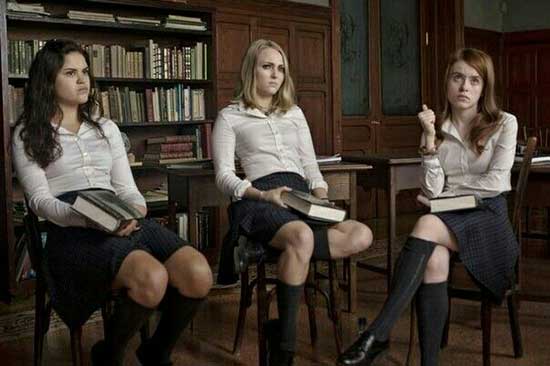 Thurman shines, underplaying the role for the most part and allowing her face to tell the story as much as her words. AnnaSophia Robb and Noah Silver both do a stellar job inhabiting Kit and Jules, respectively. They shape the cliched types as best they can into flesh and blood. I noted true intensity with Robb in the early scene in her school principal’s office and her lashing out at everyone. And Silver exemplifies vulnerability that love causes like few can these days.

There is a fair amount to like and enjoy when it comes to Down a Dark Hall. The ornate, detailed 19th century imagery, a plot that strives for (and achieves, for the most part) that rarely-seen unique, and a cast that’s all in to convince. If only the director left the hoary old tropes at home as he packed his bags for the shoot.