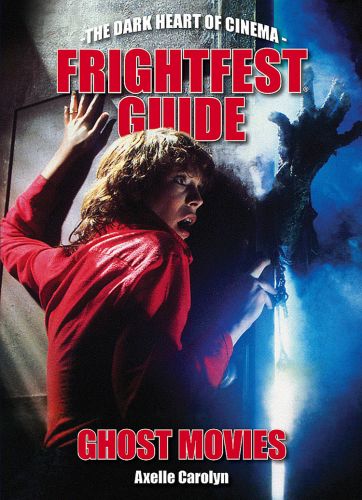 To jump back real quickly, we received and reviewed the previous release, “The Frightfest Guide to Monster Movies” in October of last year, which at the time was authored per Fangoria / Rue Morgue’s editor Michael Gin gold.

Now, as we’ve said many times in past, the FAB releases are real eye candy treats loaded with colorful imagery, scary photos, movie posters, stills, and a sharp and engaging design style that invites the readers to flip thru investigating haunting specters and creepy entities awaiting dark corners. The intro to the book dives right in with a personal acknowledge of the movie “The Fog”, a winner from the past that gave plenty of us older horror fans a nice little evening fright.

More importantly to combine with all this richness and flavor we’ve got the expertise of horror writer and genre enthusiasts Axelle Carolyn offering her guiding light thru all this darkness. Axelle has popped up here and there over the years on HNN offering interviews, book announcements, and general film news. It’s great to see her on board for this special release.

I say “special” because, while all of us horror fans love a good zombie movie and probably have about 10-14 books over the last few years solely focused on that subject, it’s a damn good surprise to see a book that covers nothing but Ghost Movies.

It goes without saying, (however still needs to be said) that ghost films have often offered the scariest moments in horror history ranging in all sorts of releases that span comedy, terror, Asian mythology, mysteries, thrillers, action-dramatics, urban legends, hauntings and even childrens stories.

We’ve seen it up the game over the last decades with new tales of fiction, some of which that are presented as non-fiction (aka found footage trickery) just to catch you off guard and present new styles of chills. Upon receiving this book, 3 releases instantly popped into my mind, 1981’s “Ghost Story“, 2017’s “A Ghost Story” and the more recent 2017-2018 release “Ghost Stories“.

All of them are featured here and a permanent part of my apparitional film journey thru the years. Though as the book proclaims, this is a Ghost Movies” release which means you may encounter many titles past and present as well as the undiscovered making their way into the genre and haunting the minds of masses.

As I made my way thru page after page of ghost-centric films past and present, one thing was very clear to me. The simple that I had a boatload of films (often mentioned and revered) that I had never taken the time to view before. Simple films like “La LLorona”, “the Canterville Ghost”, “Black Sabbath”, “The Ghost and Mr. Chicken”, were just a few titles I quickly wrote down to seek out and consume.

Sure, older films like “House on Haunted Hill“, “Carnival of Souls” and “The Innocents” brought a few shivers to my earlier years when TV was much more simpler. However, since some of these old favorites were mostly unavailable (often in late night viewing sessions that were also featured in the early morning hours) to a adolescent youth, I was really only familiar to most per titles alone, rather than personal experience.

My instant takeaway here was a sense of new inspiration that had me querying You tube for digital copies I could got back and watch. As a horror fan of modern releases, it reminded that there was richness in the past. This book helped pave the way for my new micro project that was about to unfold. If not for some to he images included here, I may have missed features that were oversights in title alone.

What I loved about this release is that while it covered several old titles, it also was as up to date as possible (even featuring images from the most recent film, “The Nun“). The Asian horror genre was equally represented here making sure to include some of the best ghostly scares to come out of that particular take on haunted apparitions and unearthly specters. Of course favorites such as “The Ring” and “Ju-on” were included, however several other titles that may have flown under the radar were also featured and interpreted for readers. In fact so many, that I was really surprised that Asian horror was so inclusive.

My final takeaway?
So you’ve had your fill of Vampire and zombies movie books, then look no further than this special collective of great old and present horror movies titles complete with highly engaging images and a thoughtfully written narratives leading you the whole way thru. The images and color designed pages make for a great reading experience that begs readers to go out and seek these special films.

Grab this book release before they sell out