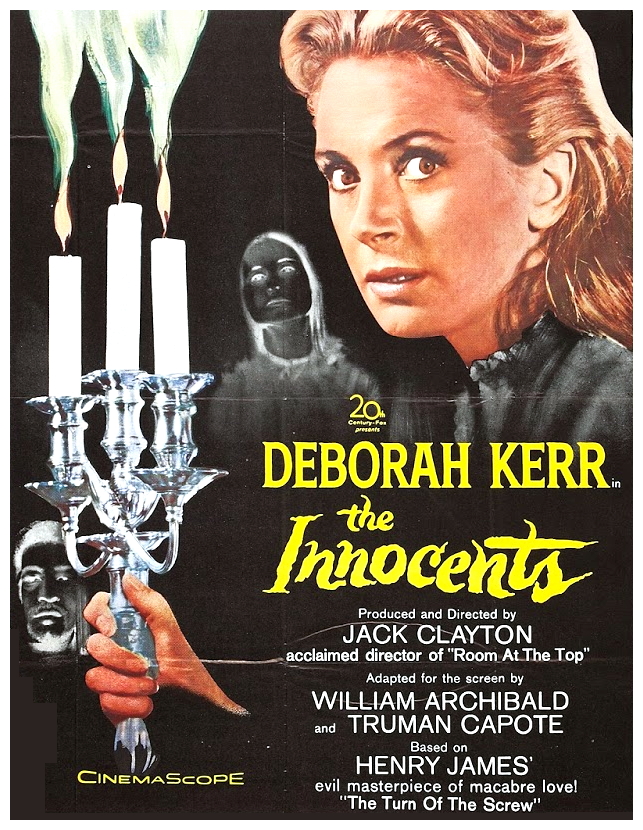 SYNOPSIS:
“Victorian England. Since the death of their parents, adolescents Miles and Flora have been under the guardianship of their wealthy selfish uncle, who admits he has no place emotionally for them in his life. While he lives in London leading his bachelor lifestyle, the children stay at his country estate, the children under the direction of a governess, Miss Jessel. After Miss Jessel passes away, the uncle hires a new governess, Miss Giddens, who admits that this would be her first posting as such, and about which she is nervous. The uncle has only two directions for her: 1. take control of every aspect of Miles and Flora’s life, and 2. don’t bother him with anything concerning the children. She will only have to care initially for Flora as Miles is away at boarding school. Miss Giddens’ first challenge ends up dealing with the news that Miles has been expelled from school for behavior corrupting the other students. Upon meeting Miles, Miss Giddens cannot understand how such a well mannered boy could be expelled, he being overly charming in an overtly mature manner. She also finds Flora to be a lovely child. As time progresses, Miss Giddens begins to feel that something is not quite right at the estate, as she sees visions of a man and a woman on the estate who she has not met and who should not be there according to the housekeeper, Mrs. Grose. She also finds that Miles and Flora exhibit odd behavior at times, especially with each other. She ultimately comes to the conclusion that there was just cause for Miles’ expulsion having to do with activities at the estate, and that she needs to bring these issues out into the open to exorcise the demons that affect Flora and most specifically Miles.” (courtesy IMDB)

REVIEW:
Keen intelligence and an educated eye for fantastic symbolism were not, of course, confined to the European New Wave during the sixties. They are very evident in two very interesting English-language films about haunted houses, by no means traditional horror films: The Innocents (1961) and The Haunting (1963). Both, significantly, are adapted from sophisticated and ambiguous originals: The Innocents from Henry James‘ The Turn Of The Screw, and The Haunting from Shirley Jackson‘s The Haunting Of Hill House. both were made by maverick intellectuals, Jack Clayton in the former, and Robert Wise in the latter. Both films are so tactful in revealing their ghosts that it is almost impossible to believe there are none – that we are witnessing the projections of troubled minds – and both rely heavily upon the careful building up of an uneasily electric atmosphere, clouded with enigma. Yet the two films are rather different. 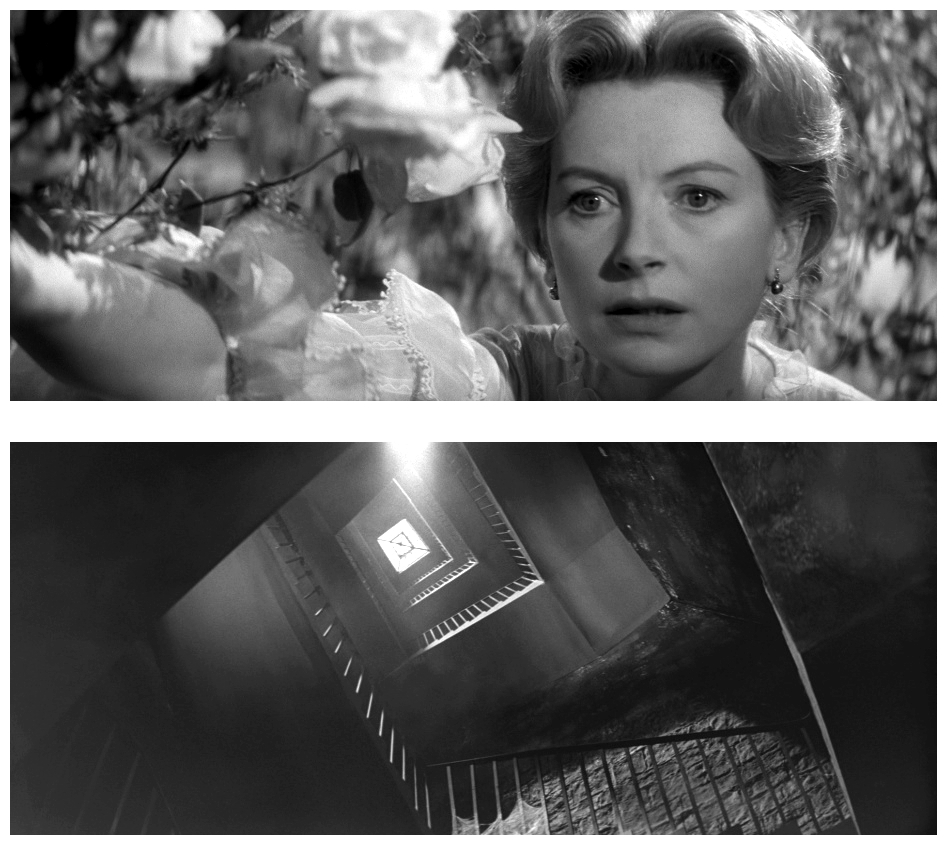 The Innocents has much going for it: the crystal-clear black-and-white photography by David Lynch‘s favourite cinematographer Freddie Francis (who went on to photograph and direct many horror films himself) and a screenplay by one of the most respected writers of the last century, Truman Capote. Based on the 1950 stage adaptation of The Turn Of The Screw, Capote is responsible for about ninety percent of the film’s script as it appears on-screen. Capote is also responsible for the strong Freudian subtext, though director Clayton chose to downplay this aspect to preserve the ambiguity. The story tells of Miss Giddens (a wonderfully genteel, nervous, repressed performance from Deborah Kerr) who applies for a job as governess. It’s actually her first job as governess, but her wealthy employee (Michael Redgrave) is not terribly worried about her lack of experience. 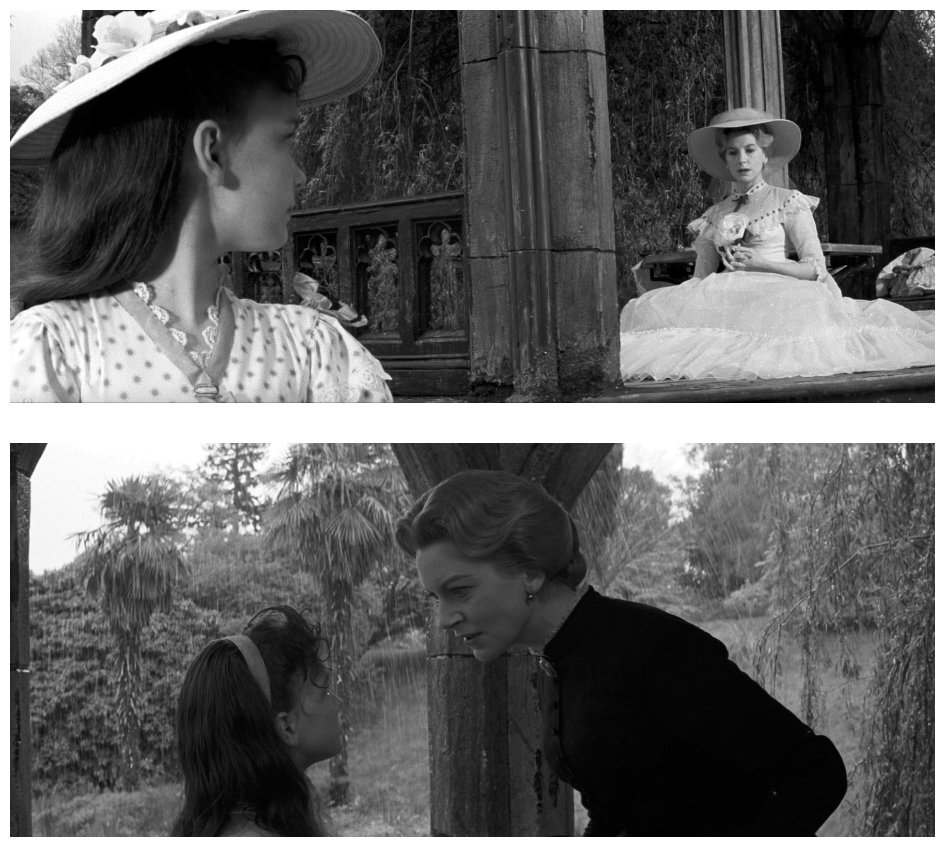 He confesses that he has no love for his niece and nephew, who were orphaned and left in his care, and the previous governess Miss Jessel (Clytie Jessop) died less than a year before. Miss Giddens is instantly taken with young Flora (Pamela Franklin) and forges a friendship with motherly housekeeper Mrs Grose (Megs Jenkins). The boy, Miles (Martin Stephens), is away at boarding school, though Flora insists that her brother will be home soon. Sure enough, Miss Giddens receives a letter saying that Miles has been expelled from school because of his bad influence on the other boys. Mrs Grose says she can’t imagine Miles ever being a bad influence and, when Miss Giddens meets Miles herself, she too thinks his teachers were mistaken. He’s charming and mature, perhaps too mature for his age. The children are friendly and polite, but Miss Giddens is disturbed by their occasional odd and secretive behaviour. 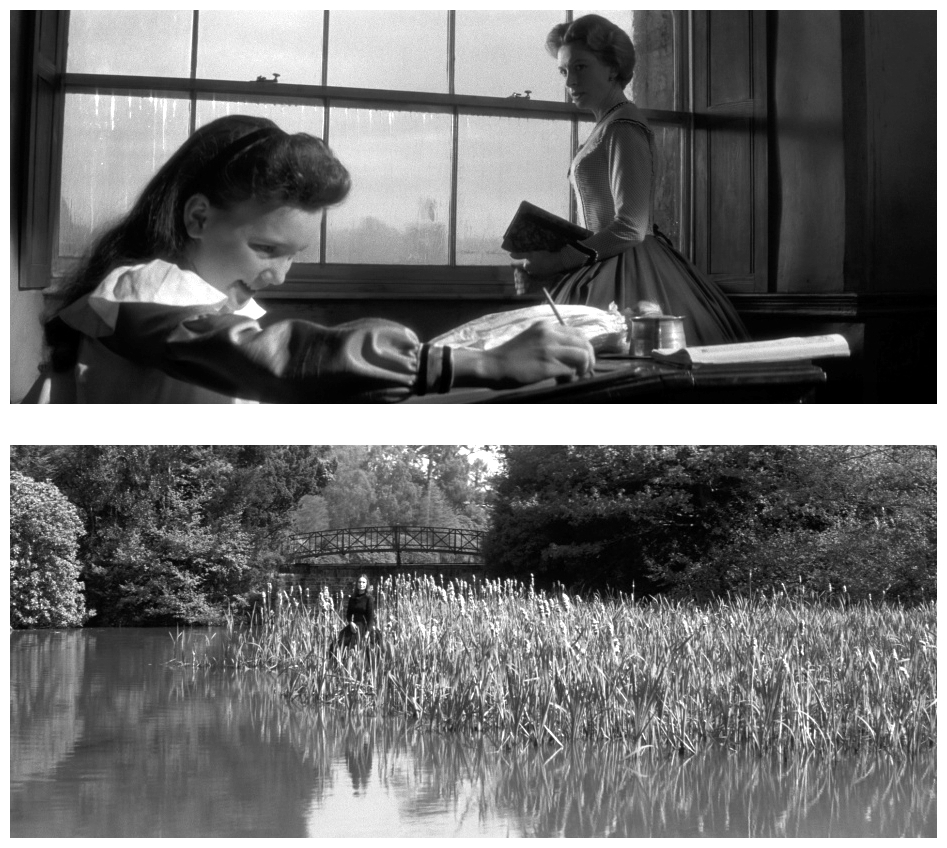 She starts to hear unexplained voices and witness visions of a couple, whom Mrs Grose identifies as Miss Jessel and Peter Quint (Peter Wyngarde), the former valet. She also says that Quint abused Miss Jessel and that they were indiscreet, performing sexual acts in plain sight of the children. After Quint’s death, Miss Jessel went into a deep depression and drowned herself. We the audience see their ghosts dimly and at a distance, but it may be that we are looking through the eyes of the governess, a frustrated spinster who conjures up imaginary images of sexual evil for entirely Freudian reasons. Clayton wanted The Innocents to be different from the Hammer horror films that dominated the market at the time, and used a number of European ‘New Wave’ devices to achieve this, including genuinely eerie sound effects and stylised lighting. 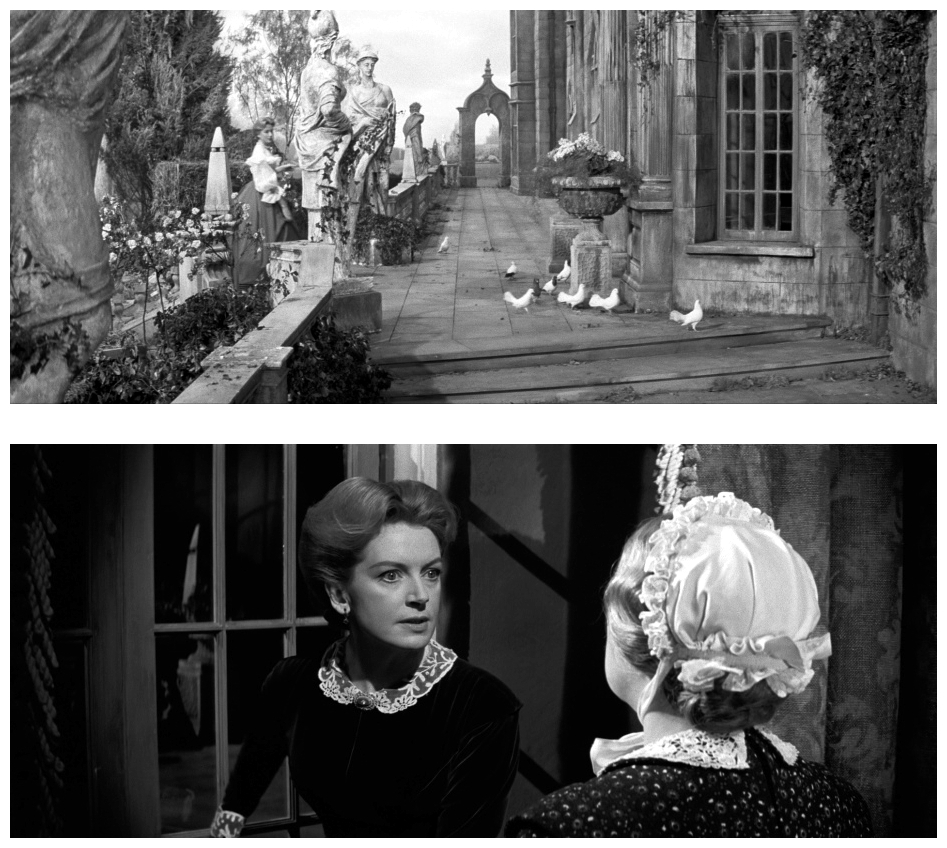 For example, the opening forty-five seconds the screen remains black while the theme song is sung (many projectionists thought this was a mistake). To make sure the children’s performances remained ‘innocent’ Clayton gave them only the script pages with their roles, resulting in an impeccable middle-class creepiness and helping to create a horror film that leaves the events open to interpretation. The contrast between sunlit gardens and moody shadows wonderfully reflects the psychological drama, but strongest of all are the individual baroque images: a fat black beetle crawling between the lips of a fallen statue of Cupid in the garden; the unsettling ballad he recites at night just before the windows inexplicably fly open (the music is haunting too with a song of dead love – “O Willow Waly“ – presenting a motif at the beginning and picked up later by Miss Jessel’s tinkling music-box); and the goodnight kiss from the young boy Miles which somehow becomes indecently sexual. 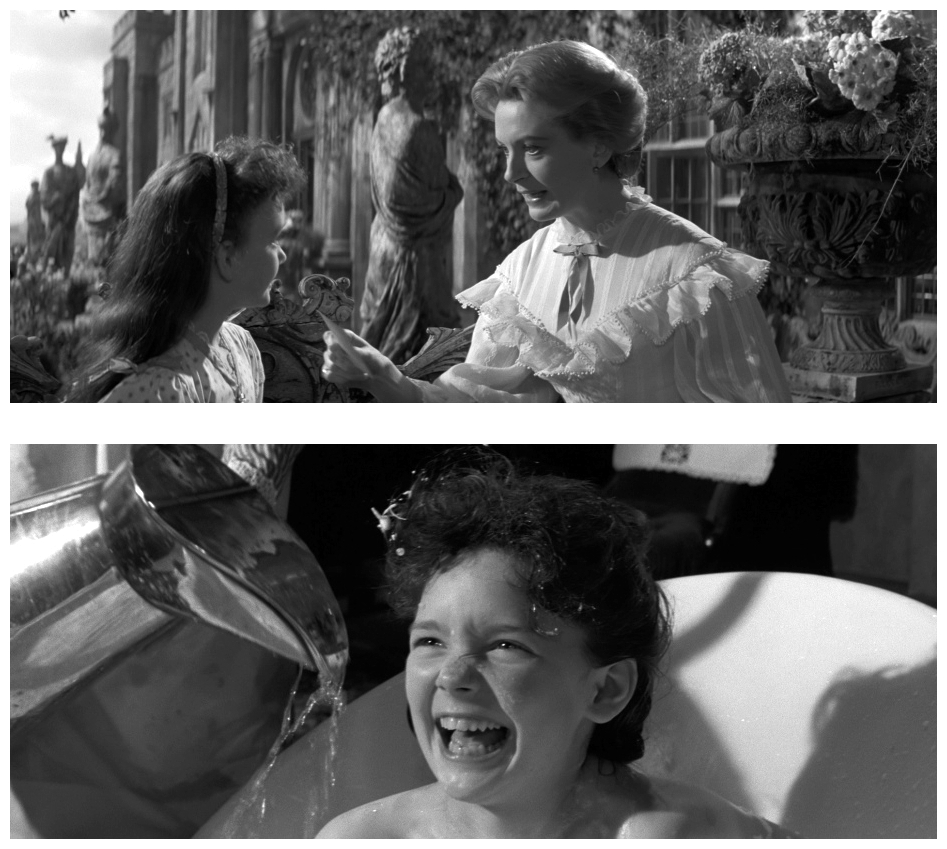 In fact 20th Century Fox studio executives were so disturbed by seeing a mature woman kiss a small boy directly on the lips, they classified the film ‘X‘ meaning no person under the age of sixteen was allowed into the cinema to see it – including the two young stars of the film. The Innocents is definitely one of the classics of genre cinema, a disquieting film that shrewdly alternates between traditional Gothic imagery (dark shadows creeping into a ring of candlelight) and bright matter-of-factness in its presentation of the other-worldly. Also worthy of mention is the prequel released a decade later, The Nightcomers (1971), starring Marlon Brando as Quint and Stephanie Beacham as Miss Jessel. It’s not such a bad film once you get past the awful accents, the too-old children, and the idea that such a story destroys the ambiguity of the original film. All right, yes, it really is that bad. Speaking of ambiguity, I’ll try my hardest to be here again next week, same bloody channel, same bloody time, same bloody website – Horror News! Toodles! 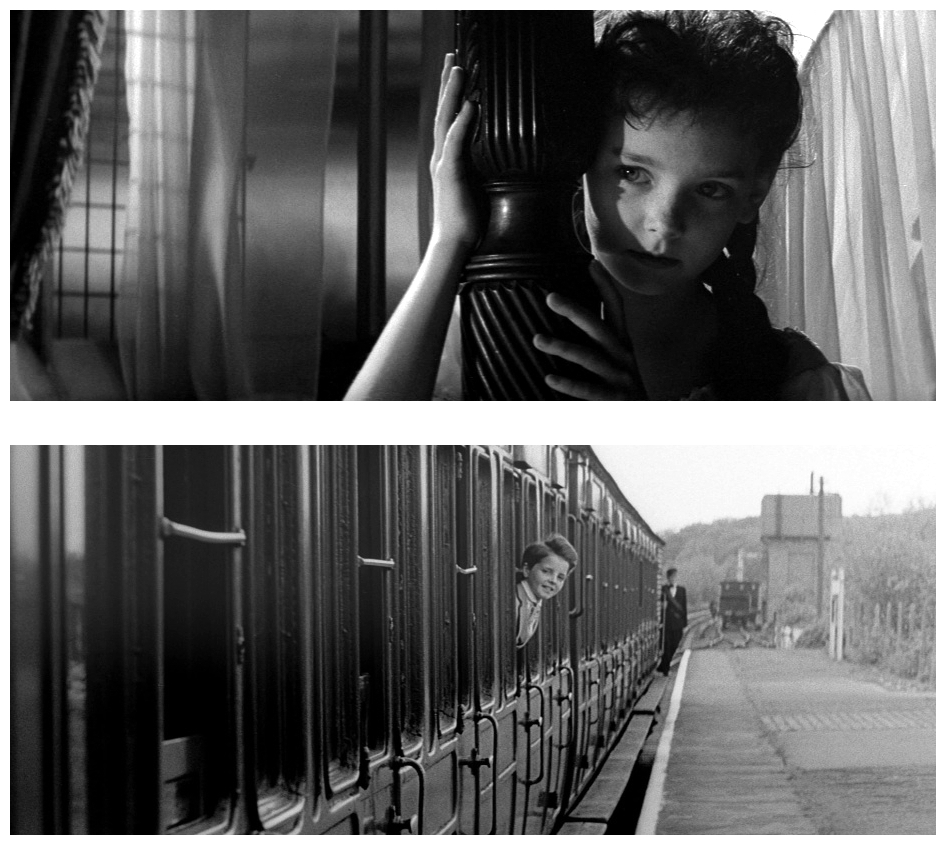