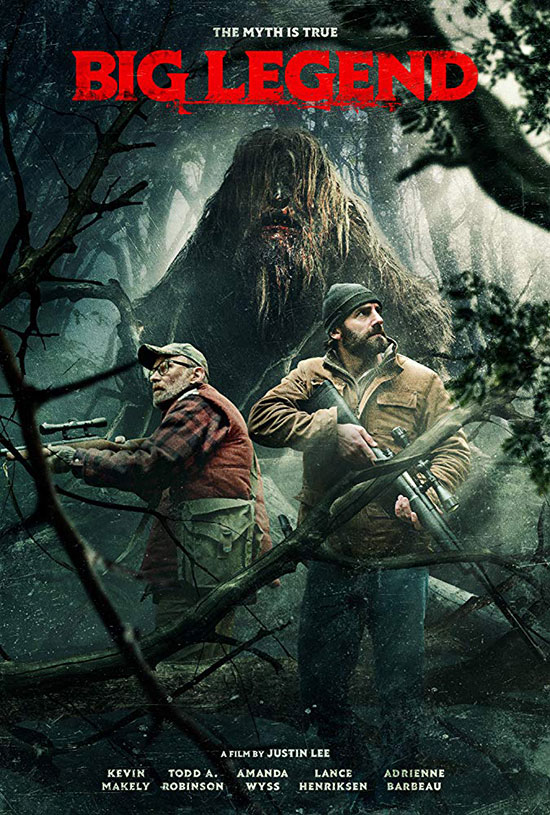 An ex-soldier ventures into the Pacific Northwest to uncover the truth behind his fiance’s disappearance.

Bigfoot. Grew up on “The Legend of Boggy Creek”. Even lived in a rural area that sported a couple of similar sightings, as well as the murder of 3 Girl Scouts, which has spawned legends itself.

While I have a fondness for Bigfoot stories, independent filmmakers have an almost obsessive lust for the big, stinky guy. Even back in the 1950s, the little crapfest called “Teenagers Battle the Thing” kinda set the tone before being reworked into the equally dreadful “Curse of Bigfoot” during the 1970s Bigfoot-mania. This mania brought a few well-intentioned documentaries and a handful of movies that have been basically forgotten, like 1970’s “Bigfoot” or 1980’s pecker-wrecking “Night of the Demon”.

In the last 20 years or so, a good number of Bigfoot/Sasquatch films have been made. I made it up to about 61 before being distracted by a squirrel, so that’s probably more than we really need.

Not according to Justin Lee. His “Big Legend” gives a jolly attempt at doing something with the Bigfoot concept, but it can be a bit difficult to determine what his goal is. 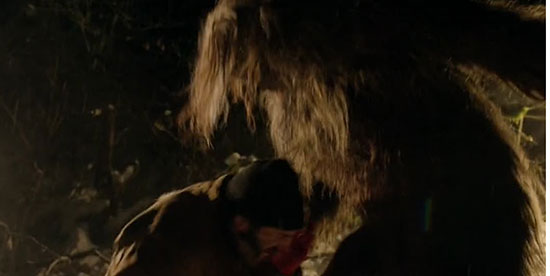 Lovers Tyler and Natalie go into the wilderness of the Pacific Northwest for a vacation to celebrate Tyler’s discharge from the Special Forces. Tyler also proposes as they are deep in the beauty of the wilds. They express their endless love. Tyler tells her he will never leave her again and that she has nothing to worry about with him there.

Cue the painfully-telegraphed tragic event of Natalie and their tent being dragged into the darkness as Tyler investigates noises in the dark. Did you really expect anything different after that many assurances of her safety and that much focus on their attachment?

A year later, after a stay in the mental hospital (for somewhat unclear reasons), Tyler has a heartfelt talk with his mom and rummages through items the police recovered from the wrecked campsite. There, on the digital SLR that somehow has a still-working battery, Tyler finds a photo of a shadowy figure.

At this point, I was confused. Why didn’t the police take the time to even look at the photos on the camera? If they did, did they just ignore the odd human-shaped figure? Also, why didn’t Natalie mention it to Tyler? I mean, the photo is clearly of the figure as there is nothing else of value in that shot. The script has shot itself in the foot, and we aren’t even addressing why Tyler’s mom’s kitchen is full of either smoke or steam.

Tyler suits up to return to the wilderness to find the truth. Why does it feel like I am watching a copy of Commando/Rambo/Taarna when they suited up for battle?

After we watch a supposed 12-year Special Forces Ranger do things no logical person would do, he realizes he isn’t alone after the creature takes his backpack. As if the photo and the huge freaking footprints he finds aren’t enough to warn him to keep his head wired tight. His vehicle is attacked after he retreats to it, but he is rescued by a fellow hunter who just happens to be right there. Rather convenient, that.

Together, Tyler and his new-found companion Eli are soon hunting, as well as being hunted by, the elusive creature. When they realize the creature also eats its victims, they know they have to escape. Unfortunately, Eli is injured in a sneak attack by the creature, and a winter storm is about to move in.

Up front, I want to make it clear that the film looks fantastic. The Pacific Northwest wildness is shot as if the camera existed just to capture the beauty. In fact, all the camerawork is solid. I’d recommend the film just to watch how the environment is made a part of the movie.

The performances are all solid with only a bit of stiffness from Kevin Makely when it comes to emoting his conflicting feelings during the middle chunk of the film. Adrienne Barbeau is quietly convincing as a mother who fears for her son but knows she has to let him resolve his questions on his own. A special note to watch Todd A. Robinson as Eli Verunde; he turns a stock character into a rather likeable person you almost hope to see more of.

The film’s main tripping point is the fact that, if you have watched a lot of popular films, you’ll feel like you are watching a film that mixes and matches bits, lines, and even scenes from a lot of sources. “Jaws”, “The Thing”, “Commando”, “Rambo”, “Rambo 2”, and “The Grey” all pop up along with a story roughly lifted from the previously-mentioned 1970’s “Bigfoot”. Oh, and don’t tell me that you won’t think of the after-credits scene from “Iron Man” when you watch the end of “Big Legend”. 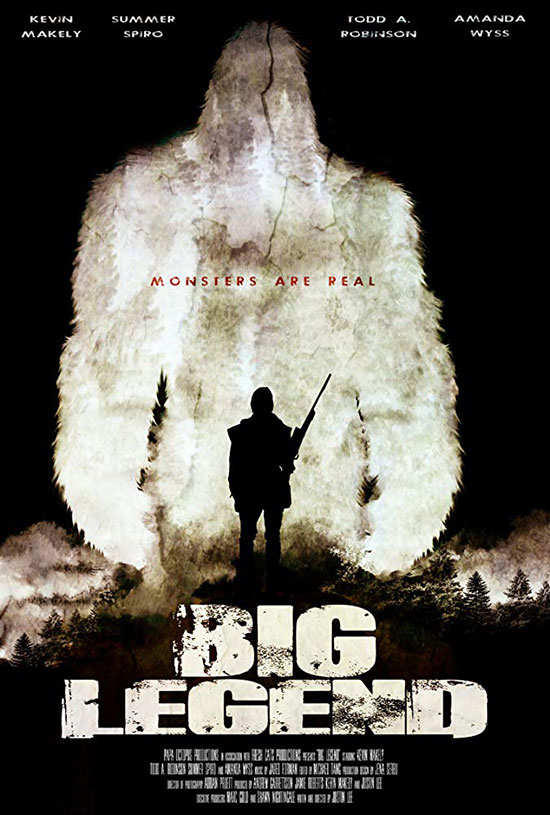 Ultimately, as moderately entertaining as the film manages to be in spite of itself, one has to question what is Justin Lee’s purpose here. We are given a clear message that the film is a set up for a franchise, but is that merely trolling? Given all the bits from other movies incorporated in “Big Legend”, why not promise a sequel that will never happen like “Buckaroo Banzai” did?

Taken as it is, “Big Legend” is watchable for the technical points, but the plot glued together from other films just makes you wonder what is the point.