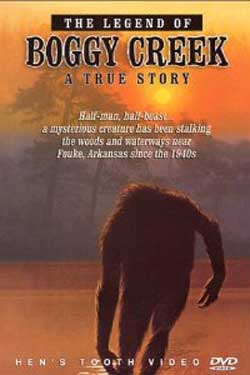 A documentary-style drama which questions the existence of a monster in an Arkansas swamp.

Ahhh. The smell of the swampy marshlands in Foulke, Arkansas where “The Legend Of Boggy Creek” takes place. The film, directed by Charles Pierce, is a sort of documentary style piece recounting the year where our narrator (Vern Stierman) tells of the summer that a scantly seen, Bigfoot like creature terrorized the town of Foulke (pop. 300). But before he begins his story, he tells us a bit about the town of Foulke and the people who live there. Mostly hunters & fisherman with a few farmers sprinkled about. He tells us that he grew up there and there are “several stores, a couple of gas stations, A post office & school, a garage & hotel & two cafe’s” where all of the men folk get together & talk about their days while smoking & having a few drinks to while away the time. Most of the people are happy living in Faulke, until the sun goes down & strange noises can be heard emanating from the woods. In fact the film actually begins with the narrator (as a boy) being sent by his mom into town to tell the men about the strange sounds she’d heard & the strange creature she thinks she saw in the woods. The poor kid ran what seemed to be about 5 miles to town & back, all by himself. If his mother was so spooked, why’d she send a young boy all that way to report it & have him come back the same way he came? All by himself? One of the few faults I found with the film is that nobody seems to have a telephone…anywhere. All messages are relayed by going to town, whether by foot or by car. In the brightest day or the darkest night. Silly, but I suppose it lends itself to the general “small town” feeling that the director was going for.

And Pierce succeeds in that effort. “Boggy Creek” opens with some very evocative shots of the woodlands & the creek, along with the animals that populate them. All we hear are the sounds of the woods as we see snakes, birds, fish, beavers & whatnot going about there business. It actually reminded me a lot of one of my faves of that era “Frogs”. Except “Frogs” had some better cinematography going for it. Pierce also made it a point to include some folksy music to the soundtrack to make it feel even more rural. The tunes are sorta catchy too I’m loathe to admit. The Black Saint likes his tunes loud & hard but some of this easy listening stuff seems to have it’s advantages as well. I’m not a convert just yet but I’ll be humming the theme from this movie for a few days for sure.

“Boggy Creek” reminded me of a “Wonderful World Of Disney” or “Wild Kingdom” episode a lot of the time. The narrator has a very familiar voice that is also very soothing to listen to. I got caught up in the imagery as he narrated the tale & I found that it actually enhanced the viewing experience. In most cases, too much narration means there isn’t enough story to keep people interested. A good narrator usually can help if that’s the case. But it’s not the case here, there are lots of stories he recounts during the film’s running time of people’s encounters with the beast. One of the biggest problems with the film is that mostly everyone in it are playing themselves. Which in theory sounds like it should work. I mean they are recounting their experiences with the creature. But none of them can act their way out of a paper bag. Which is bizarre because all they had to do is be themselves but they had to re enact some of the attacks they suffered & it’s hard to act scared at something if you’re doing it for the camera & had never acted before. They do give it the old college try though, so I can’t fault them too much. Pierce does the best he can with what he had. Again, that’s why the narration in the film is so important to it’s success. The narrator never allows us to stray from the goings on that are taking place on the screen. It’s his “down home” voice that kept me glued to the screen as I watched.

Another thing that kept me glued to the screen was the fact that Pierce (wisely) never gives us a straight up look at the creature. We gt some glimpses of him in the bushes surrounded by foilage, or we see his shadow. We hear him (her)? all through the movie but never get a good look at it which led me to pause & go frame by frame towards the end of the film when there is a sort of “Family under siege” scene in which the creature is attacking a home & being shot at. He actually gets his hands on one of his assailants & if you pause & go frame by frame for a few seconds, you can see that it’s basically just a Gorilla suit. But I did that for my own edification. When the film was released, no one had that luxury so the looming shadow & mournful growling that echoed through the forest were pretty effective. Sometimes less is better & Pierce clearly understood that.

“The Legend Of Boggy Creek” is preceded by a title card that states that it is a “True Story” & that it was filmed in Foulke and that some of the actual people who appear in the film were the ones that saw the creature. That sounds a bit bogus at first but upon further watching, I tended to believe it. The film is very clear about the fact that these are ordinary people placed in an extraordinary situation & although as I said earlier, none of them are good actors, I could tell they were trying & that counts for something in my book. I wish the film as better lit as some of the panoramic vista shots of the woods & creek are breathtaking, especially when there is nothing but the ambient sound of the local wildlife on the soundtrack. Really good stuff.

The big question is, “Is it scary”? Well, not to “The Black Saint” but I can see people being scared of it way back when. It’s effectively eerie enough to do that to some people. Never really seeing the creature helps immensely as well. “Boggy Creek” was a really big drive in hit in the 70’s, grossing somewhere in the amount of $20,000,000 on a $100,000 dollar budget. Pierce followed up with the also effective “Town That Dreaded Sundown”, which ws also a pretty good thriller based on a true story as well. But he went to the well to often & produced & directed A few more “Boggy Creek” sequels that had none of the charm or feeling of the original. And that’s too bad because it’s obvious that he had a knack for directing based on his first two films. I don’t know what he’s up to now but, if he’s reading this..It’s time to get up & direct another movie Charles! Something different & original this time, you have the skills! And that’s about all I can say to him. See “Boggy Creek” if you get a chance. It’s slow, but not boring. it’s an entertaining piece of work that deserves it’s vaunted reputation for sure. That’s all for now, The Black Saint is having some health issues at the moment & I am tired. But I’ll be back very soon with some news on a new film that I will be appearing in very soon! Line up at the box office now acolytes!! Until then…The Black Saint has left the building.