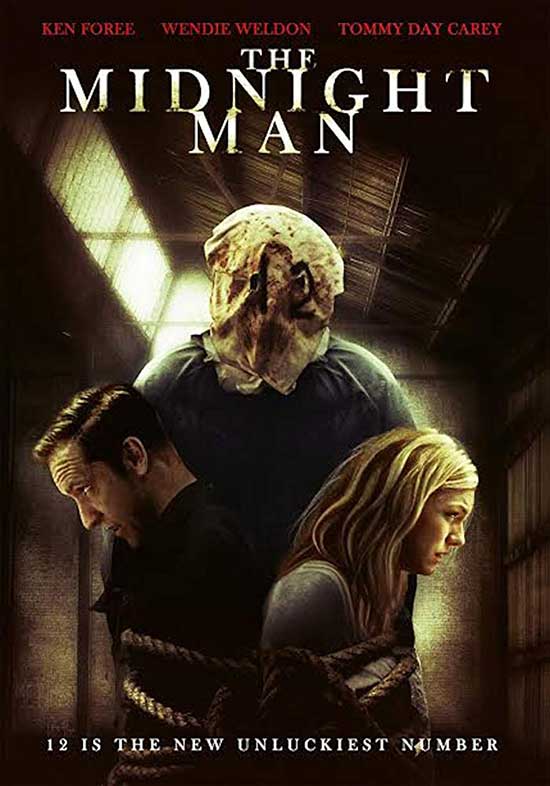 Hoping to fix their dysfunctional marriage, a couple travels to an isolated mountain cabin to work out their problems – but the one problem they didn’t anticipate is the maniac trying to kill them. (IMDB)

The Midnight Man from 2017 (not to be confused with the half-dozen other movies of similar name) is an unfocused stumble of a movie that mixes terrible spouses, loan-sharks, and the Bloody Mary-esque urban legend of the Midnight Man into one overlong feature. The plot follows struggling married couple Kyle and Jessica as they are harassed by a masked man, held captive by a loan shark’s muscle, and ultimately run afoul of the titular supernatural monster. The film is cinematographer Aitor Uribarri’s freshman feature-directing debut, as well as the screenwriting debut for Kamal Moo. The Midnight Man tries its hand at being a masterful mix of genres, starting out as an independent comedy, then weakly working at being a thriller, and ultimately wrapping up as a horror film, but succeeds at none of these.

To Uribarri’s credit, the cinematography is solid and practiced, and scene setups work well from a visual perspective. There were, however, numerous scenes when it’s clear the physical directing stopped at “good enough” instead of “best shot possible.” A prime example is when a character turns from a kitchen window to reveal a lurking masked figure, only to turn back and have it gone–except that the character’s blocking allows the audience to see the masked figure skulking away in the corner of the shot, ruining the peek-a-boo effect. Similarly, Moo’s concept (viewed as a whole beyond its confused parts) shows promise from a plot perspective; unfortunately, terrible dialogue and cliche-filled character interactions that would be at home in a first-year student production make up nearly the entire script.

The acting suffers from all of these shortcomings, which is unfortunate, as there’s experience behind each cast member. Husband Kyle is played by Tommy Day Carey (Hand of God series), and wife Jessica is played by Wendie Weldon (Worst Friends Forever), both of which can’t exceed the tragically amateur nature of their lines. Kyle says fuck every five seconds, while Weldon feels forced to cram enough passive aggression into every line to make them actively aggressive. Both Carey and Weldon chew the scenery, presumably to make up for the large number of aimless marital discord scenes, but it’s painful regardless the cause. Genre legend Ken Foree (The Devil’s Rejects, Dawn of the Dead 1978 and 2004) does an admirable job as money collector and tough-guy Hamilton, and salvages maybe seventy-five percent of his bad dialogue through good line-reads. Tony D. Czech plays an actor roped into Kyle and Jessica’s troubles, and has some decent acting moments that are overshadowed by the script’s awkward attempts at comedic relief. Overall, the lengthy spates of close-up talking-head scenes with terrible scripting put undue strain on the cast, and no one leaves looking like strong talent, which is a shame.

The effects are both wisely limited and fairly poor, with lack-luster attempts at early Sam Raimi being roundly upstaged by–well, Sam Raimi. The Midnight Man coasts around in sped-up film segments like a cadaver on a dolley, and whited-out eyes dance on the character’s face as their digital overlay fails to move with the actors. These bungled supernatural visuals are also shoehorned into the final few minutes of the movie, and fail at exceeding weekend-homework levels of quality.

The poor effects and tacked on horror content, when combined with bad dialogue, poor performances, and a script that can’t get a grip on any of the genres in its mix, results in a film that only a mother could love. Hazard it if you like, but those looking for interesting plot will get tired of the cliches, and those looking to learn any budget filmmaking lessons will too often be cringing or bored to glean much.