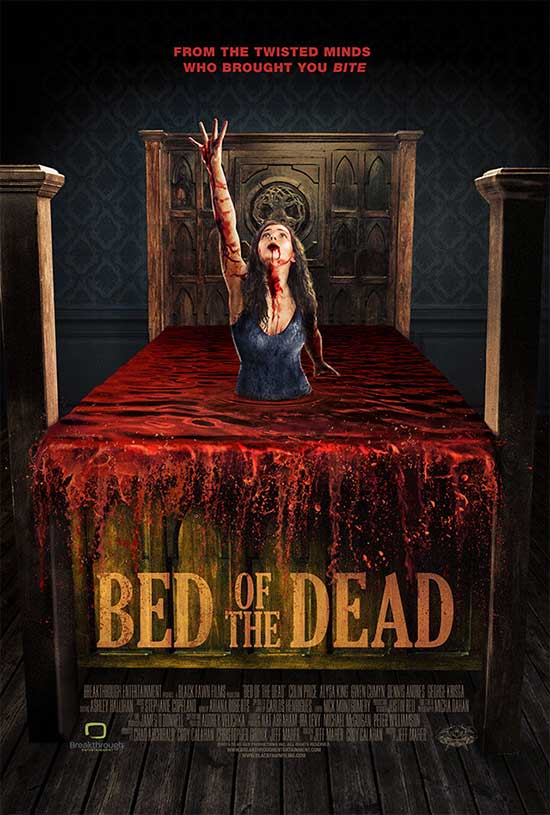 Four twentysomethings find themselves stuck on a haunted antique bed where leaving means suffering a gruesome death. Plagued with frightening hallucinations, they must figure out the bed’s secrets before they are ultimately picked off one by one.

Bed of the Dead is a haunted bed tale penned by veteran horror scribe Cody Calahan (The Drownsman, Antisocial 1 & 2) and experienced cinematographer Jeff Maher (Hellmouth 2014), who also tackles the feature as his directorial debut. What could have been a low budget cult entry in the vein of 1977’s Death Bed: The Bed That Eats instead comes as a slick feature that would’ve done fine on the theatre circuit instead of the direct to video route.

The film opens with the construction of the bed of the dead from a tree visited many times by murder and sacrifice. It then shoots to the present, where grizzled cop Virgil arrives on the scene of a room fire at a sex club in the inner city. Virgil, played by cop character actor Colin Price (Late Night Double Feature 2016), soon discovers that the charred remains of a massive bed in the burnt room was the culprit in the deaths of five people found within and near the room. What’s more, he inadvertently gets a literal phone line to the past, where one of the potential victims, Sandy (Alysa King, Holy Hell 2015), may be able to help him save her life and prevent the fatal fire.

While Virgil may be a main character, most of the film plays out in the near-past, following Sandy and her three friends as they take the soon-to-be death bed for the night in hopes of a birthday foursome. No sex-play ensues, however, as Nancy (Gwenlyn Cumyn, Pure Pwnage) receives horrible visions. One by one, the two women and their male counterparts—Dennis Andres (Defective 2017) as Ren, and George Krissa (Blood and Fury: America’s Civil War) as Fred—begin falling victim to Sphere-like hallucinations where their sins come back to claim their pounds of flesh.

The gore effects are decent, as are various spooky paranormal acts such as contortionist-ghosts and magically-appearing writing, but more creativity could’ve been placed into the death methods of the various characters. Each of them has been done before, sometimes better and sometimes worse, but that doesn’t detract from the cast’s solid performances and the well-paced plot. Virgil’s character even has a topical race-violence arc that reads even more pertinent today than it must have during the film’s production period. The movie is further strengthened by the fact that even one-scene players get more than a cursory line or two. Maher directs adeptly, and the camera work is far superior to many theatre-run horror features of late such as the Insidious series, ultimately adding mounds of class to the final product. It isn’t let down by the sets and art direction, either, which hold up well under the camera’s close scrutiny. 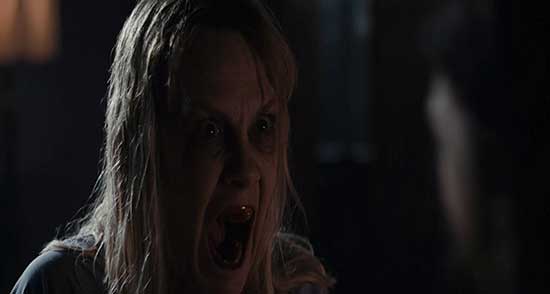 The script deals admirably with a core cast of what, on paper, are strict stereotypes—the douchey jock, the bromance-best-friend, the sexpot, the good girl gone bad, and the broken alcoholic detective—and lets the actors put enough nuance into their performances so as to make them feel more alive than their descriptions should allow. The dialogue rarely falters, and the time-skipping plot is used to good effect at the critical plot points. 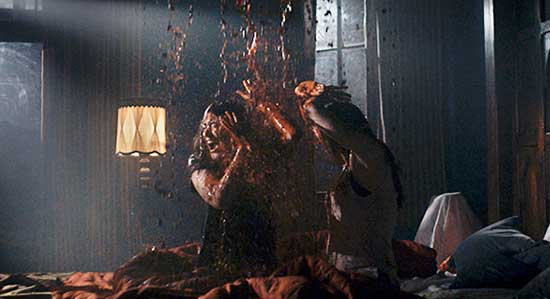 Ultimately, Bed of the Dead may not have enough new in its solid script to place it on the shelf of more memorable haunted-item films of the past, but it’s competent and visually effective in a way sure to please both horror fans and those who just want a one-night-stand with the genre. If you need a break from low-rent shlock, take a chance on Bed of the Dead—you’ll not be disappointed.