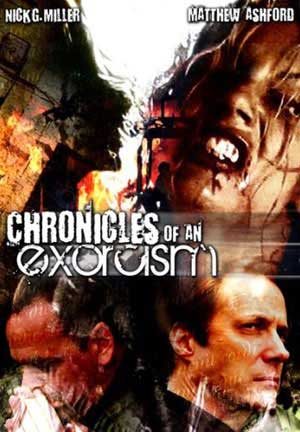 Chronicles of an Exorcism is one of those titles that you “expect” to strike fear and dread in your viewing experience that leave nightmares in your mind for weeks. Based on a true story, you prepare yourself for the worst of demon confrontations for a journey into the unknown. None of that was apparent here. No journey. No unknown.

Filmed in the now redundant verite style of filmmaking, the directors I’m guessing had the basis for a good idea and a title that would peak interest to viewers. They may had succeeded if they had did there homework but what we are presented here is a weak home video with some forced scripted dialog and weak acting. In the very least, even if all falls apart you have to have a demon that looks scary and believable. No real effort was made to bring that reality to fruition. Our actress Dara Wedel comes across really green and unbelievable in her role as the possessed victim Tina who’s only real actions are flailing about in her bed.. The FX are laughable if any, and the chaos of the camera work tends to give you a headache. In fact, The most we get out of the demon world is some obvious re-pitched ADR work with some fake contact lenses.

Of course we have a few extra story points thrown in for good measure. The questionable background of one of the priests and the fact that they have been exorcising demons all over other world. Now they discover that they are up against the king of all demons, (what was its name?). Though the king of all demons is a joke, unscary and suffocated by some bad acting. So the only hell you encounter is the 90 minutes of film watching you have to endure.

The high point of the film is a chase thru a cornfield where Tina keeps reappearing and then disappearing, This scene had some worth but didn’t last for very long till getting back to the drollness. 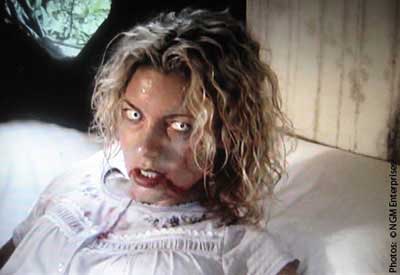 I had high hopes for the title, but while I watched expecting the energy to excel if just became more laughable. On one scene Tina is suspended to a wall and hung in the corner. Now if they were to take notes from the original “Evil dEad”, they could of pumped up that scene to an eerie supernatural occurrence. Instead its just a girl on hidden suspension wires hanging around for the moment. The 2 priests Pastor Bill & Father Lucas make a worthy attempt to recite there lines with authenticity, but it just doesn’t feel real. And trying to make a home movie style verite film, it needs to feel like the real deal to really work on screen.

What do I recommend on this film? I recommend watching The Exorcism of Emil Rose for the 6th time before wasting any real time on COAE. I’m not saying that the director can’t ramp up on his next project, but in this case more time should have been given to the details and the main acting talent rather than jumping on a couple of trends. What we end up with here is some premature filmmaking done low budget and to the point of just simply not cutting the exorcistic mustard.