A girl awaits her boyfriend to take her to the town ball when a sinister force stops her departure.

More short films, kiddies! Today we have THE BALL, written by Michael Coe and directed by Zach Lorkiewicz. The film is brought to us by Count the Clock, a Los Angeles-based artist’s collective and the film is IndieGoGo funded.

Ok, this is gonna be a little difficult to explain. This film is the latest installment in a series called MIDDLETOWN HIGH which is available on-line through You Tube, Instagram and other platforms. The series chronicles the strange goings on in the aforementioned school/town. This episode goes back in time to the Victorian era, following an ancestor of one of the town’s residents.

Our story opens on a young girl called Pearlie (played by Avril Dominquez) preparing for a winter celebration. With remarkable Shakespearan-esque candor, she speaks of awaiting her love to take her to the ball and how marvelous the night will be.

However, this girl is definitely NOT all sugar and spice, as the vengeful ghost of her rival (also played by Ms. Dominquez) rises to demand come-uppance for the wrongs done against her.

This film is a stand-alone story that I’m certain fits nicely into the larger story being told over the course of the series. Not being familiar with the series,however, I can only review it as its own story. 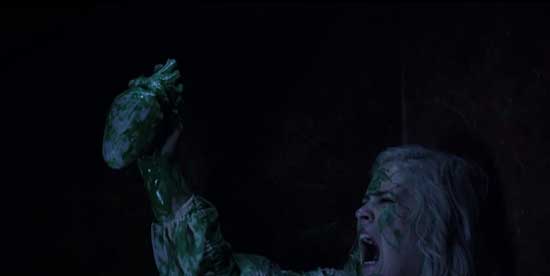 Ms. Dominquez is extraordinary in the dual roles of victim and oppressor, although one could argue which one is which. Her dialogue is not easy stuff to roll off the tongue yet she delivers with a natural cadence. Having done theater in my day, this is not an easy task and she definitely succeeds in her delivery. Mr. Coe gave her some brilliant and complicated dialogue, and I would be remiss if I didn’t mention how much I enjoyed that, as well.

Apparently it is the specialty of Count the Clock to create “micro budget horror”, and many of their previous projects have been featured on CryptTV. I picked up a punk rock/ toy box vibe in the overall aesthetic. The set is stark, yet sells the premise perfectly.

Being a fan of Victorian era stories such as Wuthering Heights, Little Women, and Jane Eyre, I found a lot to like about this film all around. And it’s as good an introduction as any into the strange world of Middletown High.

So using my special short scale of one to five, five being awesome, I’m giving this film 4 dances.