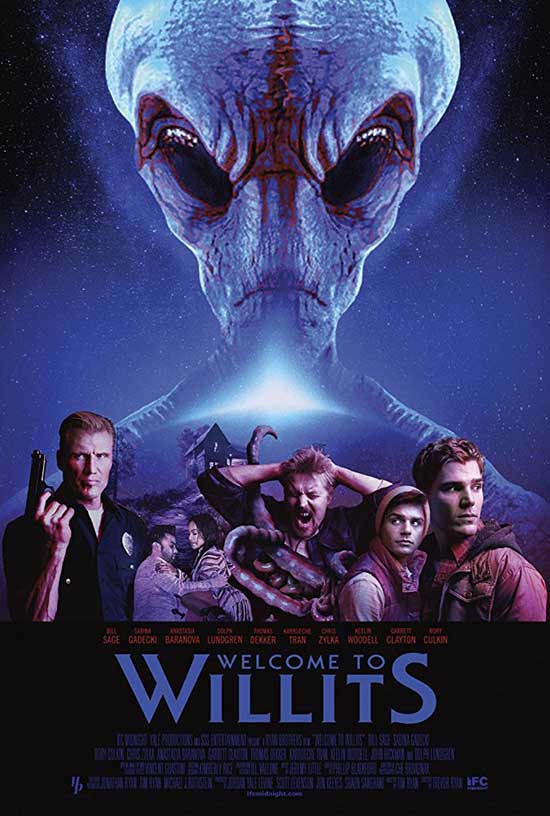 Deep in the Northern California woods, in the heart of the notorious Emerald Triangle, lies a remote cabin. The residents struggle to fight off the repeated attacks and abductions by mysterious creatures that have plagued them for years. When a local pot farmer is caught up with a wayward group of campers the situation quickly escalates into total carnage.

Growing up as a fan of weird cinema left me with some crazy ideas in the back of my pointy little head. I assumed Bigfoot was probably real, and it really just wanted people to leave it be. I was terrified of overly deep water as I expected the Loch Ness monster or one of its relatives to appear out of the depths and pull me under.

When it came to aliens, I was on the fence. Yeah, it would be cool to have intelligent beings from another world show up to do a few parlor tricks, impress our ladies, and save Mankind from itself, but, most likely, the flashy bastards would want some of my Doritos. All Hell would break loose at that point.

I’m still fairly middle-of-the-road on aliens. It really depends on how they are presented and/or used in a movie. As a result, I approached “Welcome to Willits” with more than a hint of trepidation. Aliens and backwoods folks. I feared I’d be looking at something Whitley Strieber would endorse, or I’d be getting something on the level of Troma. 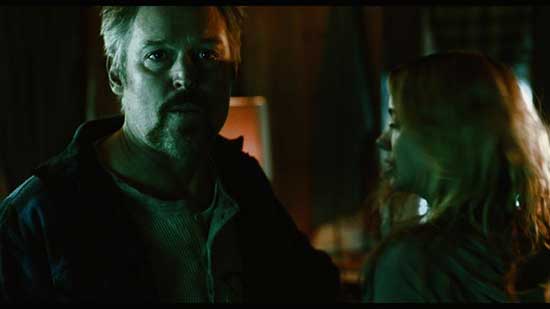 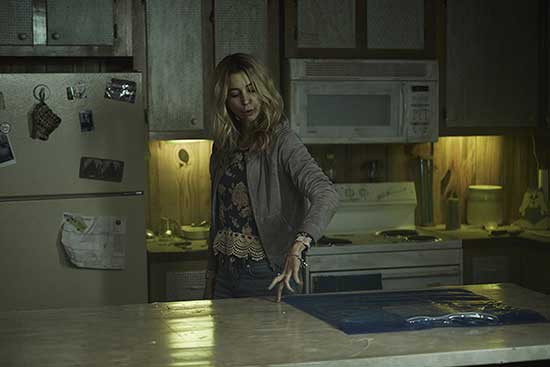 How wrong can a guy be?

We begin in what is a flashback. A guy is strapped down on a rather vile-looking and mostly organic table. He is stressed out. Clips from movies and TV programs flash by on a monitor. We see Dolph Lundgren as a cop, for some odd reason.

Then the alien makes itself known. These are some of the funkiest aliens I’ve seen. They are slimy, big-eyed, and laden with a mouthful of vile-looking fangs. You instantly think they are both cool and disgusting at the same time. The alien moves toward the strapped-down victim.

The guy snaps back to reality. Turns out Brock, the guy in the dream, is having trouble with aliens invading his compound where he grows marijuana and cooks up a special meth called Emerald Ice. He is convinced the aliens know he is able to see them, and they want the meth which allowed his brain to perceive them. His niece, Courtney, is visiting him and his wife/live-in/partner, Peggy, and poor Courtney is convinced her uncle is having a breakdown because of all the meth use.

At the same time, volunteers for the film’s body count arrive in the same area looking for hot springs in which to relax and party, like any other group of randomly-aged young douchebags in a horror movie. We learn that other young campers have gone missing in the local woods, but does that stop our group? Hell, no. 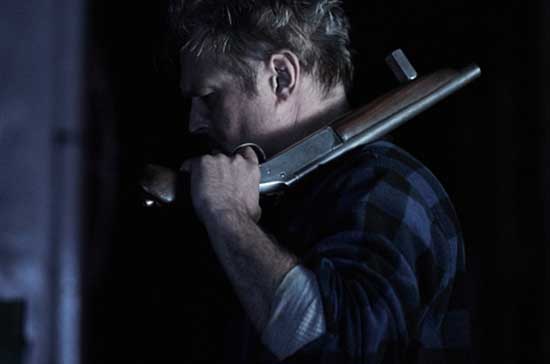 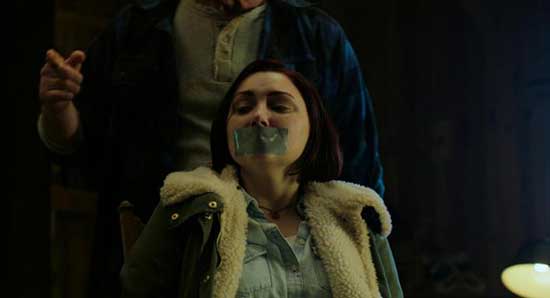 The youngsters set up camp near Uncle Brock’s place as Brock and Peggy swirl downward in a spiral of meth use, paranoia, and increasing alien visitations.

Are things starting to come together for you on this story?

“Welcome to Willits” does a pretty decent job of offering up what seems commonplace and then it twists things just slightly. The twists are enough to keep the film interesting even when you are being treated to the group of annoying young folk, who really don’t do much other than stretch the run time and provide meat for the grinder. It is similar to a Coen Brothers’ movie, but without the existential depth. It’s just different enough that you want to see where it goes.

I do have at least two major points of praise I would like to mention. Those would be the characters of Brock and Peggy, the two meth-heads protecting the Earth from alien invasion. Respectively played by Bill Sage and Sabina Gadecki, Brock and Peggy are two most intriguing characters to pop up in a low-budget movie in quite a while. They are filthy and sickly looking due to the constant meth smoking, yet they manage to pretty much command every scene they are in. Their dialogue is a delight, with the highlight being the bit about cookies while trying to convince Courtney, the niece, to come out of hiding.

I admit to never having heard of Sabina Gadecki until this movie, but I am strongly inclined to follow up on her other roles because of the depth she gives a character that could have been played with the most minimal effort. Instead, she makes Peggy into a child-like adult who still has dreams of growing up to be somebody, especially a grade school teacher. You understand her emotional attachment to Brock in spite of his rough manner, and you clearly see that she is not only loves him but sees him as a battle-scarred veteran in his war with the aliens. Just when you think she can’t so much as fart without Brock’s okay, she shows her tender heart by suggesting they do something to make Courtney more comfortable in the closet where they have her tied to a chair. Don’t ask; just watch the movie. 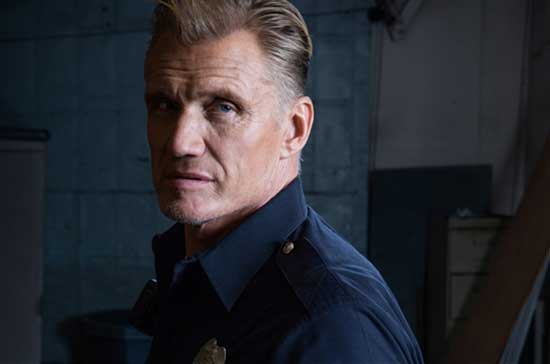 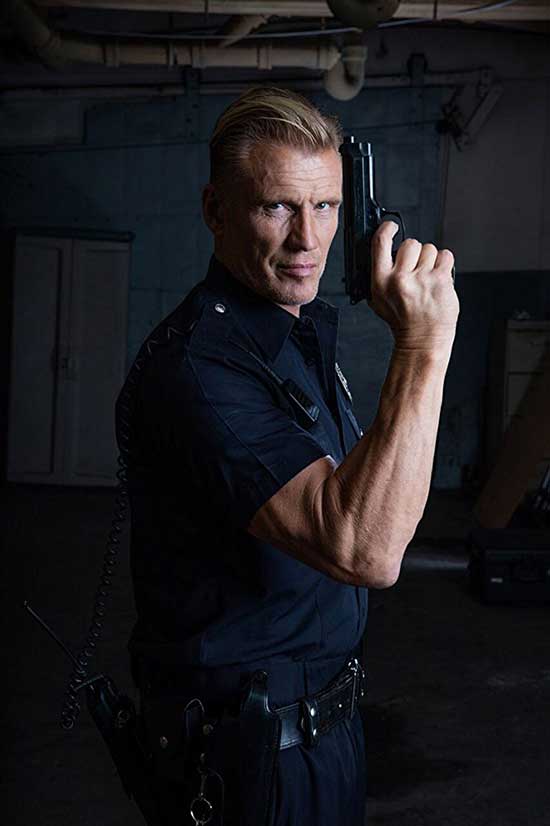 Bill Sage is an interesting actor. I spent this entire movie trying to figure out from where I recognized him. Once I looked him up, it hit me like a crosstown bus at full gallop. He had played Howard in the first season of “Hap & Leonard” (highly recommend the first season, but not so much the second). He was in nearly every one of the six episodes, and he played a steely bastard who tries the patience of the two main characters. In “Welcome to Willits”, he channels Wings Hauser in the best way possible. He swings from spastic to comatose to outright psychotic in the role of Brock, yet you still want to see more of Brock’s antics. Mainly, he captures that element of insanity that means the crazy person does not think he is crazy but that the rest of the world is. And, I swear, you almost want to believe him. 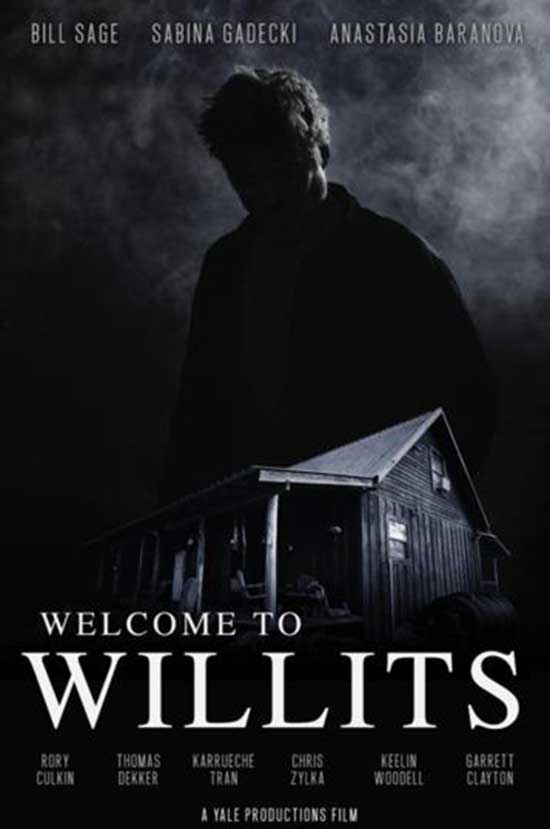 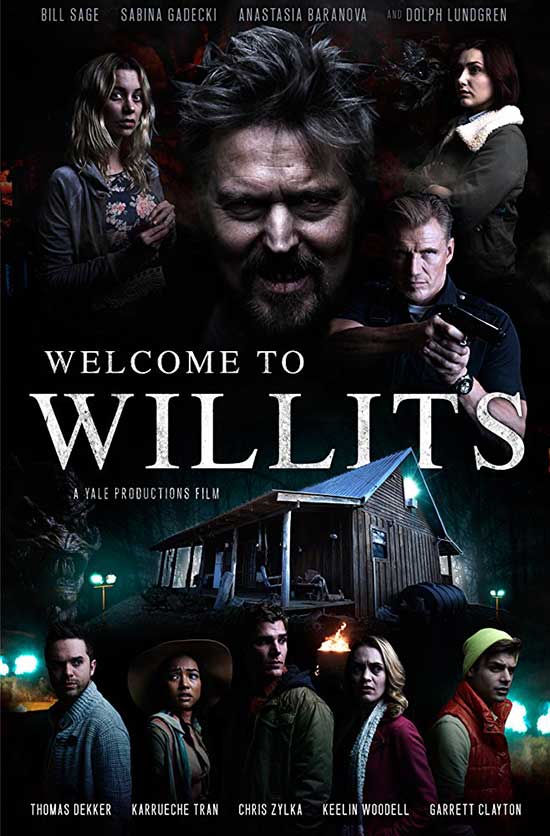 In spite of the bulk of the cast being throw-away characters (and they all know they are), “Welcome to Willits” is probably a good candidate for developing a devoted following. Not wild or weird enough for cult status, but it deserves an audience of fans who enjoy the nice little touches and twists that the Ryan Brothers (Tim and Trevor, the film’s writer and director, respectively) have littered through their movie. It’s just a film to plop down and enjoy. It doesn’t try to be a Michael Bay rip off, and it doesn’t try to joke itself to death before the audience has a chance to appreciate the humor.

For once, someone just tried to make a good, fun, and entertaining film, even if it took adding Rory Culkin and an opossum dressed in a little jacket to make the whole thing come together.