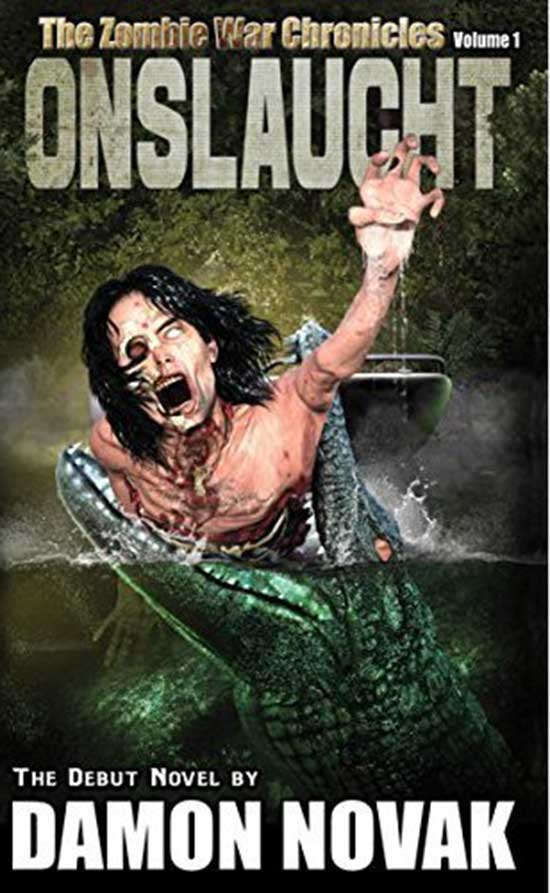 A global outbreak has spawned in the most precarious of forms, in black rain. Those exposed to the elements find their untimely demise only to rise again among the undead. Cole Baxter, never one to sit back and watch it unfold races against time and all the obstacles to find the answers he needs and to salvage any form of humanity left, despite the undead onslaught.

Onslaught Zombie War Chronicles is the first book I’ve read with author Damon Novak at the helm. From what I understand this endeavor is his premier release in novel format. Readers quite easily will be mystified that this type of talent has been spawned from a brand-new writer.

It’s encouraging to see Dolphin Moon Publishing diversify its talent and gifts to share among the horror communities and vast reading audience. On paper it makes perfect sense (see what I did there?) to add additional formidable talent into the fray. Those familiar with the press will naturally gravitate to the works of Eric A. Shelman, most notably under the zombie subgenre, Dead Hunger series. While admittedly I’m not necessarily one to gravitate to the undead fanfare upon first choice, I must confess I’ve been most impressed with the works of Novak.

Told in first person point of view, the story is told through eyes of lead protagonist Cole Baxter. His tale unveils a prose that is infectious, highly digestible and will appeal to a large market. A wide myriad of emotion is captured and in no time flat we begin to empathize with the character.

A fine balance of in the now plot escalation and previous exposition is deployed by one Novak. He appears to have a firm grip on what makes things tick for a large reading audience. The plot moves at an intriguing pace as a result and we never really take the opportunity to second guess the authenticity of the Baxter family’s plight. Additional characters are introduced along the way, additionally enhancing the conundrum and dilemmas at hand.

Without indulging in too many plot spoilers some of the most noteworthy, heart wrenching-gut twisting scenes are the ones that embody the killing of family members. Some grisly grandiose is highlighted. One does not have to be a fan of the walking dead to get a full appreciation of the unsettling aftermath. The funeral scenes afterword is crafted with eloquence. Even the most jaded and cynical of readers will not be able to resist the raw emotion attached to each. Novak enhances the empathy for the protagonists while subconsciously enabling the reader to press on vicariously to see how the characters rise above all adversity.

Onslaught: Zombie War Chronicles is the type of infectious reading that will prompt the majority of the reading audience to devour the contents within two to three sittings. I find myself late at night scrolling through the e-format and silently reciting, just one more chapter, just one more chapter. Before I knew it, I was rapidly approaching the climax. I realized I was beginning to feel separation anxiety narrowing in on the last few dozen pages. For this reader, that is the greatest indication you’ve stumbled across something most special, when you begin to feel saddened that your fantastical journey is coming to an end.

While I’ve never entirely understood why series openers label their product as “book one”, I feel it somewhat is presumptuous and provides spoilers, albeit subtle to the reader that there is more to come, before even glimpsing at the actual product. On the other hand, maybe that’s strictly my neurosis and in this case the offense is easily excusable. I’m confident the entire reading audience will rejoice in the fact there is much more to come from this talented young author.

Some particular noteworthy executions were the use of Black Rain as the primary origin of the outbreak. On a metaphorical level, the imagery depicted is highly vivid and embodies emotion in all directions. A film adaptation of Onslaught would do remarkably, inviting a whole new legion of fans into the franchise. The usage of animal life, specifically reptiles, alligators was outstanding. The blood and splatter unleashed will evoke many a gruesome nightmare for much of the reading audience.

I highly look forward to much more from Damon Novak and the disturbing delicacies on the cusp of onslaught. 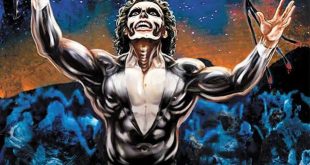 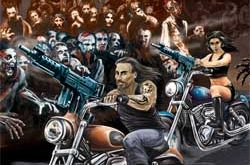