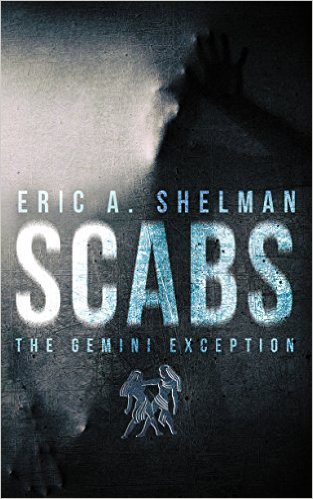 By: Eric A. Shelman

The world has gone completely awry. When the sun is out twenty four hours a day the average person is suspect to solar flares being the primary origin. It doesn’t take long to realize there is something most prominently apocalyptic at hand. Intense epidermis formations begin to surface on those who suffer ordinarily minor cuts and scrapes. While the scabs begin to manifest into something much more sinister the government begins to intervene. Twin brothers Scott and Warren Walsh, separated at childhood vie to reunite as they begin to unravel the mystery of civilization’s demise and their very own unusual immunity.

I’ve been reviewing horror novels for a very long time. Moreover I’ve been a die-hard fan of the horror genre for the better part of my life. With a standard three to four hundred page book I can usually devour its contents within two to three days. I have to admit I struggled with Scabs: The Gemini Exception for an unprecedented period of time lapsing nearly four months. Perhaps it is for reasons only the author and myself will truly understand why. In its conceptual phases this novel almost took a very different direction. While I poured over its contents I wanted most to remain objective and give the prose, plot escalation and character development a fair shake. While further contributors were forwarding their work on a consistent basis my main objective was to remain true to the integrity of this endeavor. Suffice to state there is a mountain of reading to catch up on as a result and I’m equally relieved to announce Scabs was well worth the wait.

As readers of fiction we often take for granted just exactly what is involved in the creative process from the writer’s perspective. Each author pours their heart, soul and risks exploiting their often deviant imagination for the entire world to judge. We neglect to consider the hours and days involved in utter isolation, alienation and the sacrifices the writer makes. The balance between ordinary work life, relationships, friendships and family obligations often take a back seat to the artistic pursuits. The next time you read a book remember you’re not only engaging in fantasy but taking a small part of the individual that crafted it and never forget to fully appreciate the process.

Experienced writers such as Eric A. Shelman execute their final product with such flawlessness it makes the entire process appear effortless. Many readers may go so far as to adapt the line of thinking that anyone could do this. Allow me to testify that it takes a rare passion for creative writing and immeasurable talent to develop into a marketable craft. I know this from personal experience. The writing game isn’t for everyone regardless of how devoted of a fan you may be.

In Scabs author Shelman illustrates an apocalyptic type environment in staggering vivid descriptive imagery. There are many parallels in this novel to the hit runaway series Dead Hunger. The writer seems to have a firm grasp on his market and never fails to deliver. In a realm where preconceived judgements and sociological prejudices become null and void we get a glimpse into humanistic evolution, adaptability and what the psyche is capable of to survive. As the world becomes unhinged suddenly Scott’s addiction, alcoholism and poverty along with his twin female companions Lana and Laura’s prostitution suddenly becomes inconsequential. Their collective follies somehow make them more readily empathetic allowing the reading audience to relate to them on a more emotionally accessible level.

Scabs opens from Warren’s point of view talking about the outbreak and his presentation of considerable exposition appears not extravagant and allows the reader to become engaged instantaneously.

Descriptions of the scab metamorphosis and haunting, macabre and will burn into the imagination like a tattoo. Shelman paints a vivid picture that will resonate with most long after the final chapter.

The homing pigeons utilized as a means of communication is very innovative. At times it appears murky if their presence is entirely essential. Yet the methods in which Scott and Warren undertake to reach out to one another does provide some levity in an otherwise grim, doom and gloom tone.

Quite easily the most noteworthy element of Scabs is the manner in which the characters are brought together. It’s endearing to witness Scott become closer to Lana and Laura than strictly on a physical level while Warren bonds with his mother Missy. Additional characters are introduced along the way providing some most memorable dialogue that adds an undeniable level of authenticity to the story.

The conclusion wraps up in an intriguing fashion where the reading audience will highly anticipate a sequel. Fans of apocalyptic type tales or creature features will surely rejoice. A safe bet for audiences unfamiliar with Shelman and of course those who are deeply devoted.