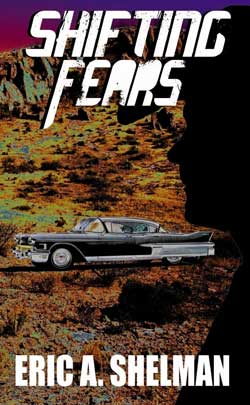 Luke is a mild mannered auto mechanic with passions in life for the simple things. He loves his family, his girlfriend Terri, his business and his borderline obsession with restoring his 1958 Cadillac Fleetwood Sixty Special. Working on it since childhood he pours blood, sweat and tears into his project proud of the fact it contains all if its original parts. While taking it for a test drive in the outskirts of the Las Vegas dessert an unearthly presence makes itself known by the name of Wade. Luke is beside himself in terror to realize Wade is a serial killer insatiable for blood. As the stranger takes possession of his prized Fleetwood Luke is helpless to realize he’s also assumed ownership of his body. Will Luke be able to thwart the evil ways of a killer hell bent on death or will it be a simple matter of Shifting Fears?

Eric A. Shelman’s haunting tale of paradox, time travel, human possession and serial murder is a roller coaster ride into terror, unrelenting of the psyche pushing the very boundaries into overdrive. With an uncanny, accurate portrayal of fifties lifestyle, family morals, values and pop culture we as the reader are lead into a spell binding expose of sci-fi/thriller grandiose. We don’t doubt the circumstances presented in either time frame, making this novel a certifiable bone chiller from page one to conclusion.

At first glance there were some potential concerns about some racial slurs contained within the content that may offend some readers. Upon a more analytical look, Wade’s values and opinions are a necessary evil to accentuate the authenticity of his character. Bear in mind the sociological attitudes and views in the late nineteen fifties were very different compared to today. Shelman takes a leap of faith in exploiting our antagonist’s ruthless tendencies as a simple reminder to the reader as to how things were. His unapologetic illustration of Wade’s perceptions enhance the story rather than hinder or detract from it. Somehow softening the main villain would be a dramatic error and at the risk of offending some, his realism becomes larger than life.

The author’s applied knowledge or research there of pertaining to classic automobiles is impressive if not staggering. Personally, as an absolute babe in the woods when it comes to such topics I was a little lost with some of the mechanical jargon. At times I was confused that perhaps I was submerged in a trade magazine rather than a psychological thriller. Some readers may find it overwhelming but it’s a relative non-issue and doesn’t hinder the overall impact of the conflict escalation and character development. In many instances we’re impressed with Luke, his business and employees and strive to find out a little something more about the world of automobile restoration.

It’s endearing to witness the relationship between Luke and Terri. We see parts of ourselves through their interaction and reflect upon our own relationships. Shelman has a bona fide knack for creating empathy unto his readers, breathing new life into a wide assortment of characters. Even in instances where we may not be able to relate to the protagonists whole heartedly we experience traits that are admirable, likeable and dependable. Many times we find ourselves living vicariously through the fictional interactions which in essence is one of the many reasons people become enthralled with reading fiction is for a good, reliable, dependable escape.

Wade is a convincing antagonist/villain. His quirks and methodical demeanor in how he baits and kills his victims is cerebral and bone chilling good reading. With another subgenre steadily on the rise in popularity within the realm of horror being serial killers and murder, Shelman zeroes in on a tried and true topic offering his own distinct flavour much to the delight of his legion of diehard fans and avid newcomers alike. This author boldly stakes his claim in versatile, compelling horror silencing critics speculating that the runaway zombie hit series Dead Hunger may be a fluke. Make no mistake about it, Shelman has forever cemented his impact in the realm of psychological horror fiction. I would be thrilled to embark upon any future journey so long as Shelman is the tour guide along the way.