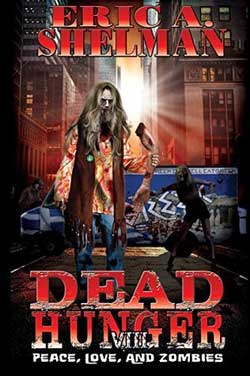 An exploration into the zombie apocalypse from character staple Nelson Moore’s point of view beginning in 2011 prior to when he’d met Flex, Gem, Charlie, Hemp among others. This latest edition also goes into elaborate detail on how the civilization of Kingman, Kansas was created set in the year 2028.

Author Eric A. Shelman does it again in delivering an unprecedented eighth sequel to the highly popular, runaway hit series Dead Hunger. This time around the chronicles are told from the point of view of the beloved subdudo wielding stoner Nelson Moore. The prose is delivered like a comfortable second skin as Moore tells his story in a conversational type fashion forever flowing in a steady stream not entirely unlike hearing a compelling tale from your uncle or one of your mates down at the pub. Nelson’s story accentuates bona fide realism as his little idiosyncrasies come shining through like getting sidetracked or distracted on a train of thought. It reinforces the believability of the story telling process, sub consciously engaging the reading audience deeper and deeper.

An instant sense of empathy is achieved for one Nelson Moore. This author has an uncanny ability to develop a rapport with his protagonists and reading audiences from the get go. Even though Nelson has less than modest origins we get behind his plight and feel compassion for his desire in wanting to save his mother from her own personal demons. Those of use familiar with the previous chronicles will certainly recall having met Nelson and cannot help but be enchanted with his subdudo, perpetual stoner shenanigans as further attributes are explored such as having a photographic memory. Perhaps what is most endearing about this character is his insecurity, uncertainty and reluctance to develop a leadership role.

I’ll refrain from any plot spoilers but some of the most horrific and disturbing content is conjured and summoned in this chronicle. As a hesitant hero, Nelson leads friends Heather, Matt, Gregor, Jeff, Domenic, Sam and Nancy straight into an abyss of hell. The events that unfold within these circumstance will surely unnerve some and no question will make most second guess a decision to stop for roadside inquiries.

Perhaps what is most ingenious about this edition is the fashion in which Nelson’s point of view revisits situations and occurrences covered in previous chronicles but from his eyes. Many readers will feel compelled to pick up prior volumes for comparison notes. The quest to get to Concord, New Hampshire is covered as well as the prominence of red eyes and the pregnant hungerers is covered. It’s interesting to get Moore’s slant on things that other characters have experienced and from a marketing perspective is nothing shy of brilliant in drawing subtle attention to the other volumes.

Those readers concerned that perhaps Shelman is getting a little too soft or sentimental as his writing career flourishes, I for one can honestly testify that couldn’t be further from the truth. Fear not gore, guts and graphic fans the stomach churning, deliriously depraved content is dialed up a notch. Such memorable sequences come to mind as dangling sausage like intestines comes to mind from one of the zombies. The gross out factors are very much alive in Shelman’s work and refuse to relent any time soon.

Additional variables or subtle cues are utilized to best enhance realism in a world gone mad. Exploration in elaborate detail in how a man’s scream can be as equally if not more so haunting than that of a woman’s is chartered to create a virtual more human than human scenario. Musical references such as classic rock, sports jerseys, etc. are also mentioned to create an atmosphere of everything is normal before the world went to hell also enhances an undeniable sense of realism. I did get a chuckle out of most of the female protagonists being blonde but considered it a non-issue and even a stimulating challenge to play casting director in my imagination.

Without argument some of the most touching points to Shelman’s work is the dialogue and interaction that takes place between the main characters. His ability to tell a story within a story and execute the plot escalation in heart-warming circumstances through dialogue, body language and non-verbal cues is mesmerizing. Most, if not all readers of the Dead Hunger series can attest to the reading experience being more comparable to an adventure, like a literary reel unravelling within the cerebral cortex.

Many of us read for varying reasons, whether it be to find an escape, pass time or quite easily the number of reasons could be as diverse as the reader itself. I personally know I’ve stumbled across an extraordinary find when upon closing in on the remaining two thirds of the novel a certain sense of sorrow begins to creep in and you strive to savor the remaining chapters, pages and paragraphs to maximize the thrill as long as possible. Shelman is no exception as I’m sure most will agree a certain sense of sadness arises at the realization there may only be one more Dead Hunger volume for release.

If you haven’t chartered the unforgettable thrill ride known as Dead Hunger as of yet, you’re doing yourself a genuine disservice. These chronicles are no question designed to not only stimulate the imagination but have a tendency of enriching lives. I for one cannot wait to revisit them again.